Born In The USA

It would be easy to write that it was a different sort of Manchester Whisky Club this month, coming as it did three days after the terrorist attack at the Arena. If you looked around the city centre on Thursday you could see the odd unusual sight: the armed police strolling through Albert Square, for example, and the extra bag searches taking place outside the Bridgewater Hall. 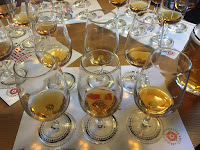 But inside the Britons Protection there was nothing out of the ordinary at all. If to carry on as normal in the face of terrorism means settling in for an evening of American whiskies, then I suppose we all carried on as normal, which is as it should be.

We ended up tackling no fewer than seven bottles for our Born In The USA night, including a surprise bonus bottle at the end, more of which later.

It was our first American tasting in almost three years, and Martin kicked the evening off with a bottle he returned with from a recent trip to Florida, and the Winter Park Distilling Company in Orange County. The Bear Gully Classic Reserve, a bourbon, is the first craft bourbon made in the state, and to our palates had the distinct taste of walnuts about it.

It's very corny too, in that it tastes like the sort of thing you might have at breakfast time (not that having whisky at breakfast is necessarily recommended). It's very sweet too, and at 53.3% and a US price of about $40, it's good value as well.

From the south-eastern United States, we moved to the Pacific north-west, and in particular Spokane in Washington State for dram number two: the Triticale Whiskey from Dry Fly Distilling.

Triticale is not exactly a word on many people's lips. It's a hybrid of wheat and rye, which was first bred in labs in Scotland and Germany in the 19th century. Dry Fly's bottling stakes its claim as the world's only straight triticale whiskey, the 'straight' tag meaning that it's been aged for at least two years and has no additives.

The Dry Fly is actually a 3yo, and we liked this one too. It's an easy drinker, a bit oily, a bit grassy, a bit gingery, and it tastes stronger than its 45%. It's available here for about £48.50, which represents reasonable value. Dry Fly also has a 10yo single malt on the way, which should be well worth keeping an eye out for.

After those independent distilleries, we went to one from the Jim Beam stable next: Booker's True Barrel Bourbon. Very strong and spirity, it comes in at a weighty 63.7%. Its notes of Christmas cake were perhaps a little out of place on such a baking hot late spring evening, but this got approving nods all round as well. One to sip.

A 7yo, we got ours for about £45, but rumours abound that price is about to increase significantly as Beam Suntory aim to make it more of a premium drink, so it may well be worth grabbing a relative bargain while you can.

We had a half-time break next, and with the temperature rising throughout the pub the staff opened the fire escape at the Britons to help get the air through. This gave us a rare opportunity to get a slightly different view of Manchester and, in particular, the Beetham Tower, against a cloudless late evening sky.

But after getting our breaths back it was onto the fourth drink, and like the Booker's True Barrel it was another one from Kentucky: namely the Pikesville Straight Rye from the Heaven Hill distillery.

This 6yo was named the second best whisky in the world by Jim Murray as recently as last year, and picked up the World's Best Rye award at the World Whiskies Awards, too, so it's got quite a pedigree. And we certainly enjoyed this one as well.

Very smooth, and someone suggested a touch of Parma Violets on the palate. Quite how anyone has the recall to remember exactly what Parma Violets taste like is beyond me, but we'll go with it anyway. It's 55% and £70. Whether that price tag is quite worth it was up for a bit of debate. But there's no question it's a very pleasant drop indeed.

Next we went to Texas, and the Lone Star State's best-known distillery, Balcones. Based in the city of Waco, it has become quite the craft distilling powerhouse in recent years, previously under the stewardship of the now-departed enfant terrible of American distilling, Chip Tate (for more on the history of that relationship and Tate's new venture, check out this profile from the excellent Texas Monthly magazine).

We got stuck into their Texas Single Malt Whisky, the Balcones take on a Scottish single malt. Made using a process known as 'yard ageing' - allowing staves to be seasoned for two to three years rather than the more typical six to nine months before they are made into barrels - is what helps make this distinctive.

It's absolutely terrific on the nose, and very biscuity. If anything it's not quite as spectacular on the palate, but regardless, everyone loved this. At 53% and £95 it's not cheap, but it is a great whisky (and yes, they call this one whisky rather than whiskey).

It was back to Kentucky for whisky number six, its capital city Frankfort and a name you may well be familiar with: the Buffalo Trace distillery. One of its best-known expressions is the George T Stagg, and we had a go at its little brother, the Stagg Jr.

Matured for nearly ten years and bottled at a not-insigificant 66%, it certainly packs a punch. Another great, bold whiskey, although for some in the room this was almost a bit too strong. Others picked out a bit of black cherry on the palate, although whether this was actual black cherries or black cherry yoghurt, is a discussion that may yet be continuing. It's £76.

At this point we took a poll for dram of the night, and although there were a few votes elsewhere, there was a 9-9 draw between the Pikesville and the Balcones. Thankfully, we got a surprise opportunity to break the tie! There was an extra bottle for us to enjoy at the end, courtesy of Gareth from Maverick Drinks who joined us for the evening.

And it was another Balcones! This time, the Balcones Brimstone, a bottle dating from the days when Chip Tate was still involved with the distillery. After distillation he smoked the spirit and yes, it was certainly smoky.

For folks who enjoy a peatier Islay this was something to savour, almost like a barbecue whisky. Or, as someone put it, it tastes of Frazzles (again, who has had Frazzles recently and can genuinely remember what they actually taste like? I think we should be told). Opinion was divided which led to a some memorable exchanges ("It's sooty!" "No it's not!") but then this was the seventh whisky of the night, so we can be forgiven for not exactly being at our conversational best. It's 53% and £78.

We re-ran the dram of the night vote and someone switched sides, giving the Balcones Texas Single Malt a 10-9 victory over the Pikesville Straight Rye. But in truth, this was a truly excellent tasting, one of the best ever: some of the other whiskies which didn't even feature in the voting might even have been drams of the night on other occasions. I think we'll all be taking a closer look at the American section of our favourite whisky retailers in future.

And so thanks to everyone for an excellent evening, but in particular Martin for selecting such a great group of drinks for us, Gareth for joining us and supplying that extra bonus bottle, and thanks also to everyone at the Britons for hosting us once again.
Posted by Richard at 11:37 AM