The Six Nations Championship of Whisky

We met at the end of February for what will now, sadly, be the last in-person tasting of Manchester Whisky Club for the next little while. For the first time in my seven years of attending the club, I finally got around to actually hosting a tasting, and I led the members through a whisky representing each of the competing nations in rugby union's Six Nations Championship: Scotland, England, Ireland, Wales, France and Italy.

You may well have noticed that some of those countries are rather better known for producing whisky than others. One of those nations probably more associated with rugby than whisky is Wales, but not through the want of trying of their best-known distillery, Penderyn. Based in the Brecon Beacons, they have carved out quite a name for themselves, with their highly drinkable and very good value Madeira cask finish standard bottling a common sight in supermarkets and airports these days.

For this tasting I picked out a rugby-themed dram, the bottling the distillery produced in 2019 to commemorate Wales' Grand Slam in the Six Nations, which is when one country beats all the others. It's a port wood finish, and there are various bits and bobs about the final victory over Ireland on the packaging, if you're into that sort of thing. It's got those port-type flavours of berries and red grapes about it, and a dried fruit sweetness as well. A great way to start the evening, this went down very well. It's 46% and is £48.

If Wales is not exactly a whisky hotbed, the best efforts of Penderyn notwithstanding, what should we make of Italy? Well, to describe it as not a whisky country is a bit misleading: it has a long-standing taste for Scottish whisky, especially younger expressions bottled specifically for that market, meaning that obscure Italian bottlings are a staple of the 'old and rare' whisky scene.

There is an Italian single malt actually produced there though, and here it is. Psenner is a distillery in the Tirol best known for making fruit liqueurs, but it has turned its hand to whisky as well with this 3yo called Eretico. It's matured for a while in ex-grappa casks, and also spends time in Oloroso sherry casks as well. But it's certainly the pungent grappa that comes across both on the nose and the palate. Certainly distinctive, but probably not one too many club members will be trying to seek out. It's 43% and is available locally for 70 Euros, but we paid a bit more to get it through Amazon.

Ireland next, but mixed with a hint of another emerging rugby nation, Japan. This bottle is from the Glendalough distillery, which emerged in County Wicklow in 2012 as an independent bottler of whisky produced at Cooley's, although since 2015 it has started to make its own stuff too (this being 13-years-old, means it falls in the former camp). The twist here is that it is finished in mizunara oak casks. A wood native to Japan, it was used in the Japanese whisky industry because of post-war shortages, but since then has proved a tricky beast - the trees don't grow straight and the wood is relatively porous.

But using it is not just a gimmick. Mizunara is known for imparting a distinctive flavour on whisky, and this Glendalough was no exception. This had a bit of coconut about it, and was very smooth, with a sort of fudgey, chocolatey quality about it too. Lovely. It's 46% and £78.

After a half-time break when I served up some homemade millionaire's shortbread and Aberdeen rowies (thanks to the Hairy Bikers for the recipe), it was on to the remaining three whiskies, and three cask strength ones too.

First it was France. Or to be more precise, Brittany. The last time we did a Six Nations tasting back in 2016, it was a bottle of Armorik that we rated the best. I thought it was sensible to bring them back for another go as reigning champions, and picked out their 2002 bottling, a 14-year-old.

It was a single cask (3309), aged in Oloroso sherry. And it was a bit of a sherry monster, with lots of dark fruits on the nose, then raisins and creamy vanilla, along with a long and warm finish. Again, this was a popular drink with the group. It didn't quite taste all of its 56.3%, and went down a bit more easily than that. It's £85.

Only two nations remained and I switched it up a bit. For the last dram I went with a Scottish whisky bottled in England, so first that meant an English whisky bottled in Scotland. Not just any old English whisky, but something from The English Whisky Company of Norfolk, an 8yo bottled by the venerable whisky name of Cadenheads. This was a vatted malt, meaning a combination of two or more single malts, on this occasion one peated and one unpeated hogshead, distilled in 2010.

This certainly did have a bit of smoke about it, more of an ashiness really rather than a full-on Islay-style peat explosion. But there were also other flavours were could pick out, the main one being a general sort of sweet barbecue sauce sort of thing. It was 64.6% and was available for a £55, although I'm afraid we picked up the last one. 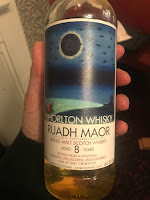 Also unavailable now is the last whisky of the evening, another from our friends at local (to us) independent bottler Chorlton Whisky. Again this had a peat theme, in that it was an 8yo Ruadh Maor, the brand name used by Glenturret for its more peated expressions (the name translates from the Gaelic as 'red steward').

This particular bottle was aged in a hogshead from Caol Ila, hence the peatiness. Again there was a sort of barbecue flavour going on, with some honey and even toffee apple on the finish. Nice again, but it perhaps didn't quite hit the heights of some of the earlier whiskies. There were just 158 of them produced at 62.5% and it was £50.

And the dram of the night voting, to crown the Six Nations Whisky Champions, went the way of... Ireland! The Glendalough took nine votes, with support also for the Penderyn and the Armorik. Sadly the Scottish whisky at the end got no votes at all, perhaps proving that Scotland should stick to rugby? Actually, maybe not.

Thanks again to all club members and guests who came, and to everyone at the Britons for hosting us again. Hopefully we'll be back again, sooner than we fear.
Posted by Richard at 5:12 PM