Our August remote tasting, the first under Greater Manchester's renewed Covid restrictions, found us sampling a range of drams taken from the club's stocks. No particular theme, but an opportunity to try some excellent whiskies which the club had kept aside for a rainy day like this.We did this one blind, revealing the bottles after tasting each whisky. And the first whisky of the night was fresh, with a sort of grassy or organic-type vibe about it. Not as sweet as some whiskies, with a spiciness and a sort of white wine-type crispness on the nose. Some said this wasn't particularly special on the nose but tasted better, and someone thought it was a bit heavy in the end.
It turned out to be a blend, a no age statement one at that, from Compass Box and called The Story of the Spaniard. Inspired by working on a whisky with The Spaniard bar in New York, this is built around whisky drawn from sherry and Spanish red wine casks (so that was wine we could pick up, just the wrong colour). A very pleasant start to the night though. It's 43% and is still available for £52.
Next we had a much sweeter nose to contend with for dram number two. There maybe wasn't too much else on the nose, though, with a subtle, even menthol type smell. There was much more to go at on the palate, with a particular rush of sweetness at the very end. Adding a bit of water brought out that menthol that much more, along with the likes of liqourice or even nail polish remover (not sure what this actually tastes like, but it takes all sorts).
Some in the club suspected a lightly peated Islay, but it was in fact a Speyside. Not just a Speyside, but a Glen Moray, a distillery recently branching out from its reputation as a purveyor of highly affordable, entry-level whiskies that you can pick up in the supermarket. This was a 13-year-old which had spent all its life in madeira casks, hence the name Madeira Cask Project. It's 46.3% and £62 if you can find a bottle. Closing comments on this included "yummy" and "really good".
Onto number three and the nose was unusual, with early suggestions from members including "wet carpet" and "cleaning products" with even a bit of cardboard in there somewhere. Yet despite that possibly unpromising initial blast of mustiness on the nose, once we tasted this, there was widespread enjoyment. Slightly peated, and very pleasant indeed.
The whisky hailed from Campbeltown, once a hub of the whisky industry and now certainly well onto the comeback trail, although the number of distilleries there is a fraction of those that existed in the early 20th century. This particular bottle is from the Glengyle distillery but does not appear under that name, because the rights to 'Glengyle' are held far away at Loch Lomond these days. So instead, it's bottled as Kilkerran, and this was the 12 year-old expression, one of the first of the core range released by the distillery since its 2004 reopening. At 46% and just £39, this represented great value too.
After a short break we resumed with whisky number four, and this was sweet on the nose before a big hit on the palate. Much bigger than most were expecting after the nose, to be honest. It was very peppery and tasted very strong, and that pepperiness was a complete surprise. Other comments included "sweet" and "syrupy, like golden syrup".
This was a Highland Park, bottled by the Scotch Malt Whisky Society under the name 'Celebrity Yurt Indulgence'. It was surprisingly peaty for a Highland Park. A 16 year-old from a refill Oloroso sherry butt, it tasted all of its 60.6%. We paid £85 for it from the SMWS, although it's long since out of stock.
As is often the case with the closing dram of any tasting, it was time for the 'peat incoming' siren to go off, once we poured the last miniature into our glasses. It certainly gave off a fantastic smell for all the peat monsters in the club, of whom there are quite a few. This had a saltiness, sea water, even notes of salted fish and burnt tyres. Really very lovely indeed, some also fancied this with a bit of water too.
It was a Finlaggan, a brand created by the Vintage whisky company. So the actual origin distillery is a bit of a mystery, although we do know for sure it was on Islay somewhere. The particular bottle we were drinking was the red wine cask, which clocked in at 46%. At just over £42, another bottle offering good value.
All of which brought us to the dram of the night voting. And not for the first time, each whisky had some supporters, indicating plenty of strength in depth from this particular line up. But the winner in the end was the SMWS Celebrity Yurt Indulgence with nine votes, just ahead of the Story of the Spaniard and the Kilkerran which picked up six each.
Thanks again to all club members and guests for taking part via Zoom, and to Anna and Martin for overseeing this well-timed raid on the club's whisky stocks. 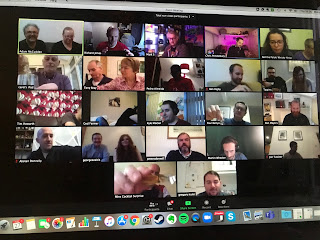