A Virtual Trip To Islay

For our tasting in October we went far away from our locked down homes in and around Manchester, and took a virtual trip to one of the homes of whisky, Islay.Adam had five drams lined up for us, along with a sprinkling of the unique history of the whisky island and its classic peated produce.

The first whisky was actually acquired a little closer to home, though. The Wee Dram in Bakewell is one of the best independent booze shops around. The owners produced their own 15-year-old bottling of Bruichladdich back in 2017 in honour of their daughter, Jade, and this was it, simply called 'Jade's Cask'.

We were trying all of them blind and playing a bit of 'guess the distillery' and for this bottling, the smoothness and lack of very strong peat left some speculating it might be a Bunnahabhain, before Adam revealed the correct answer.

Very sweet on the nose and the palate, with notes of marshmallow and a bit of a kick at the end, we thought this was very nice indeed. It was 50% and cost £53 directly from the shop, although it's no longer available.

The next dram was much more spicy, with pear drops on the nose, although that rather gave way to a bit of Christmassy sweetness on the palate, with raisins and a touch of mince pie. Some with longer memories even suggested Parma Violets.

There certainly wasn't much smoke around, and that was confirmed when the bottle was announced as an unpeated Caol Ila, in the form of a 2017 Diageo special release. It was 18 years old and clocked in at a hefty 59.8%, although it didn't really taste quite that strong.

This particular bottle was in the old 'Highland style', made for blends, which pre-dated the more familiar single malt releases we now get from Caol Ila, making it doubly unusual. If you can find a bottle out there today it'll set you back about £100.

For whisky number three we really were going to Bunnahabhain. We got a characteristic phenolic nose, and then in the mouth a powerful tingle and dry biscuity feeling, with sweetness not far behind. A bit like a caramel flapjack, as someone suggested.

This was a Signatory single cask bottling, an 11-year-old aged in first fill sherry casks and remarkably strong, at 67.3%. A real bargain at £82 when the club bought it, but now sadly sold out.

We moved on, for whisky four, to a bottle from the ever-popular Ardbeg. However, this particular bottle didn't exactly have the characteristics of a typical Ardbeg. We weren't sure whether this was because it was lighter than normal, or whether that monster of a Bunnahabhain had knocked our tastebuds out of whack a bit. But we didn't get too much from this at first.

Perhaps it was a little of both. This turned out to be a new addition to the Ardbeg range, the Wee Beastie, a 5-year-old at 47.4%, making it only a little stronger than the standard 10-year-old bottling.

Some felt this a bit watery rather than showcasing the classic heavy Ardbeg taste, but those in the group who had tried this before said it was generally a lot better when it didn't have such a big act to follow, and we did appreciate the fact Ardbeg are bold enough to put an age statement on this. One to have another go at. It's 47.4% and £37.

To finish, we somewhat unusually had a blend to get our teeth into. The name Octovulin, itself a long-shut Islay distillery, was used by independent bottler Malts of Scotland for the 2017 instalment in its Dark Side of Islay series. A 19-year-old, this was a blend of three types of cask from three different distilleries.

A lovely, interesting dram with plenty going on, smooth on the nose and palate and a long, warm finish. There were 1,421 bottles produced, although they are long gone!

The dram of the night voting went the way of that last bottle, the Dark Side of Islay, just ahead of the big old Bunnahabhain. Although each of the whiskies got at least a couple of votes, which goes to show what a strong line-up we had.

Thanks to Adam for hosting the tasting, and to all club members old and new for joining in once again over Zoom. 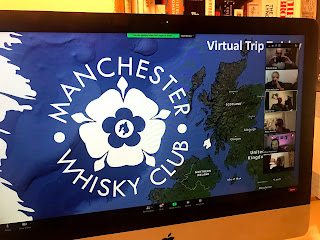