Thursday 28th Feb saw us see out our second meeting as a club and what better way to do that than putting to the test 4 whiskies from highland distiller Tomatin.

These drams were kindly provided to us direct from the distillery so a big thanks to Tomatin for their kind offerings!

We sampled their 12, 15, 18 & latest edition of their 30 yr old.
(All tasting notes are based on Andy's views with general feedback from the tasters) 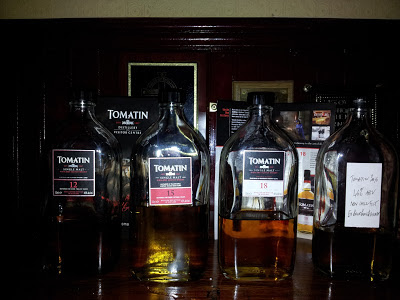 A sherry finished whisky this had a deep rich colour.

Nose- The general consensus was that the nose on this one was leaning a little bit too far to the oaky side, with other notes including strong plastic or rubber and a hint of almonds. (On a separate note the 12 was tried again outside the club and  the nose was completely different!)

Palate- An improvement on the nose however it was said right away that this was certainly lacking in some respects. Initial hit of sweet sherry with a little spice thrown in but both faded quickly.The sweetness was that of a light yet sickly sugar syrup with the oak ever present.

Finish - As above faded quickly but there were swift glances of berried fruits and cereals.

North american oak bourbon matured with a lovely light colour in the glass.

Nose - Wow what an improvement, it just goes to show what 3 years and a different wood type can do. Oodles of malt, apple peel, vanilla and honey. Some citrus there perhaps?

Palate - Not only the extra 3 yrs but the extra 3% is making the difference here compared to the 12. More fruits and malt followed by vanilla and caramel.

Finish - Quite long and warming, more malt fading out alongside honey and cream. 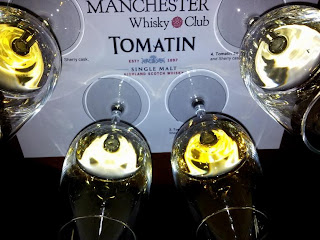 We're back to the darker sherry finishes with the 18 finished in Olorosso sherry butts.

Nose - Very beefy nose, not literally beef (or horse) but very punchy indeed, lot of depth to this one. Walnuts, winter spices and sultanas. Akin to a christmas pudding mix after the brandy is added.

Finish - Again punchy but rather dry, more oak influence here with a final hint of honey.

Now the 30 was finished in both Bourbon and Sherry casks more akin to the 15 in colour this whisky is surprisingly light for its age!

Nose - So much more refined than the previous offerings.Well balanced interplay between light vanilla and oak with berries, greengage and demerara sugar in the background. Lovely

Palate - Again vanilla, malt, a hint of light oak not overpowering this time it actually added to the experience, and then from nowhere blackcurrants on the back of the tongue!

Overall I think that the vast majority of members gave the 30 and 15 the thumbs up. The 12 was definitely the runt of the litter so to speak but there was definite promise in the complexity of the 18. For me the 30 was a nice surprise I was expecting heavy overpowering richness from something that age but it was extremely well balanced and a delight to drink.

There are a lot of positives from the range but the 12 for me isn't something I'd actively seek out, I think there are other drams in the same price range and age that I would choose instead. It might be worth going back to Tomatin at a later meeting and try the 25 yr old expression as a go between from the 18 & 30.

Again a big thank you to Tomatin for providing these drams

Posted by Manchester Whisky Club at 9:49 AM