A Taste of the Orient 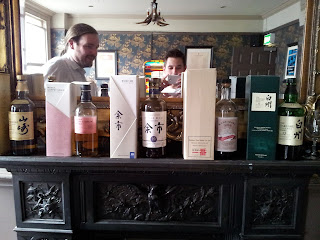 Amazingly, for the past 4 weeks the weather in Manchester has been turned on its head. An odd, yellowish disc has been frequenting the sky, engulfing the city in a warm, almost tropical glow. This months Whisky Club theme wasn't exactly tropical but certainly took us away from our usual safe haven of the British Isles to the Pacific and the temperate climate of Japan. 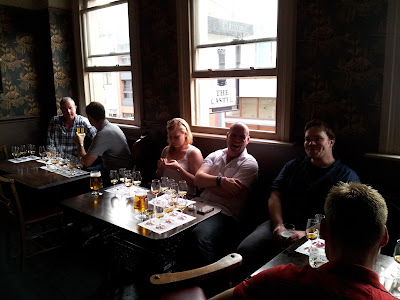 Japanese whisky is having a bit of a surge in sales at the moment. There has been an increasing demand for Japan's high quality offerings across the UK and Europe.

We had a varying choice of 5 drams on offer including malts and a grain. No blends this time round as we're going to go back and revisit Japan and its blends at some stage. 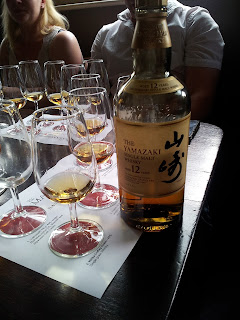 We started off with what can probably be seen as the most common of the Japanese bottlings available in the UK, Suntory's Yamazaki 12. This is probably one of Suntory's biggest sellers, matured in both ex
sherry & bourbon casks, this offering is quite similar in a sense to some scottish whiskies.

Nose: Lovely rounded fruits, a bit of pineapple, raspberry preserve, christmas nut mix, raisins.
Palate: A very light lychee syrup, more raisins and a slight dusting of cinnamon.
Finish:Wow where the hell did that come from! On swallowing an immediate harshness comparable to more of a new make spirit! Long and lingering with a slight note of toasted pistachio nuts. 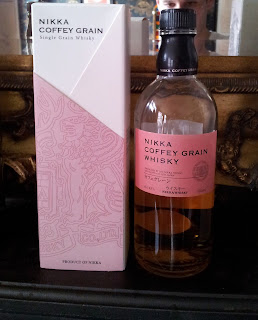 Nikka, Japan's other 'Big' distilling brand alongside Yamazaki are renowned for producing some of Japans best blended malts alongside some of their single malt and grain portfolio. Nikka Coffey Grain is named as such due to the production method of using a coffey still. We saw good examples of coffey still production in some of our Irish whiskies a few months back. This is a type of still that can be operated constantly and efficiently, producing larger batches of spirit that a standard still and pot still.


Nikka also produce a 'Coffey Malt' range which is quite a high end offering. This grain bottling is relatively new and has no age statement. This was the club's first taste of a single grain whisky. In this case produced using mainly corn rather than the more commonly used wheat. This bottling is produced at Nikka's Miyagikyo distillery. 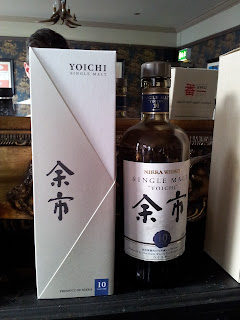 Yoichi is 1 of only 2 whisky distilleries that make up Nikka's portfolio. Set in beautiful mountainous surroundings on the northern island of Hokkaido, the Yoichi distillery uses the traditional method of direct fired stills using coal. The Yoichi 10 is a peated whisky, is the rest of the Yoichi range, the 10 is matured in sherry casks. The distillery was opened in 1934 and was Nikka's first active distillery.


Nose: Again a sweet element, possibly brown sugar, banana bread, then the sherry begins to peek through alongside a damp peat.
Palate: An oily yet thin mouthfeel, initial sherry influence with dark fruits and bitter chocolate with the peat making a brief appearance.
Finish: Blackcurrant and black pepper, toffee with a lingering finish.

One of our members - Charlie of the Ginfuelledbluestocking blog, very kindly brought some freshly made Sushi along from her sushi making class earlier in the night. It went along very nicely with the lighter whiskies and reinforced the flavour of the evening. Thanks Charlie! Karuizawa whisky can be something of a rarity in the UK. There has not been much distillation taking place in the last decade and recently the owners have handed in their distilling licences so it is very likely that Karuizawa's stills will fall silent indefinitely sooner rather than later. So far the releases that have made it to Britain's glorious shores have predominantly been of a single cask nature and generally costing over £100. That is, until now.

A Norfolk based whisky importer, Number One Spirits which is run by a chap named Marcin Miller - contacted Karuizawa and purchased 77 single casks distilled between 1999 and 2000. Rather than importing them in another single cask format, they have vatted all 77 to make a unique, no age statement bottling, which incidentally is an extremely affordable example of this distilleries wares.

Nose: Sherry! Sherry in all its Speyside-esque glory, Nutella spread, raisins, freshly oiled wood.
Palate: Lots of sweetness with more chocolate, dark this time, damp earth and rather herbal
Finish: Another example of a lingering finish from a Japanese whisky here, edging into savoury notes this time before tailing off with a glowing warmth. 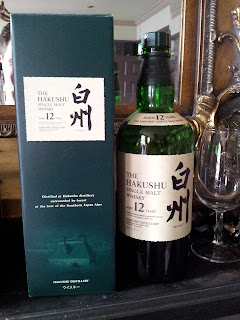 Our final whisky of the night was another of Suntory's range. This time, from the Hakushu distillery, built in 1973 and set among the forests at the foot of the Japanese Alps. A lightly peated offering, this has been matured in ex bourbon casks.

Nose: A fantastic nose on this one. similar in a sense to the Nikka grain in that it is so light and floral, plenty of orchard fruits, sherbet lemons and yet with a slight breeze of peat tickling the nose.
Palate: Crisp, sweet apple again, before sliding into a delightful mix of vanilla and Danish smoked salt.
Finish: Relatively brief but again sweet with the peat making a reappearance, macadamia nuts, dried apricot. Lovely


Overall we had a good varying selection of Japanese malts (and Grain!) that certainly showed the potential of the country's spirit and why it has become so popular of late. We had a split in opinion as to the best bottling of the night with a rough split between the Karuizawa and the Hakushu with one or 2 going for the Yoichi as their dram of choice.

You can certainly tell that Scottish distilling practices have had an affect on the way Japanese distillers approach their production method. In some cases seemingly trying to mimic certain existing styles. Hopefully in the next few years Japanese distillers such as Suntory and Nikka will throw caution to the wind and finally begin to create a true Japanese style malt in its own right.