The night was the 27th June 2013, the place, the Castle pub on Oldham Street. A slow and constant drizzle had settled over Manchester but inside the Castle there was plenty of southern state sunshine courtesy of this month's whisky club lineup. 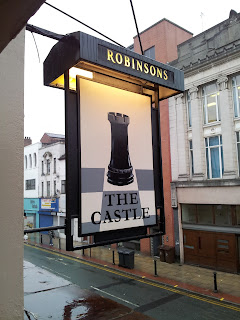 This was to be the club's first non- UK/Irish based tasting and featured some of the best Whisky and Whiskey the USA hd to offer.

Before we start all at the club would like to say a huge thanks to everyone at the Castle for making the club feel so welcome and Jonny in particular for providing us with the wonderful facilities.
The surroundings really did add to the atmosphere of the night, the Castle really is an incredible venue.

﻿ ﻿
We had a good turn out on the night with people from the waiting list and even the Castle itself in attendance. The room had a great buzz about it.
﻿﻿﻿﻿
Above was the night's lineup. From Left to Right - Kentucky Vintage, Four Roses Single Barrel, Balcones True Blue, Sazerac Rye and Buffalo Trace White Dog Mash #1 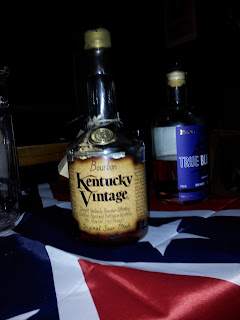 When you think of traditionally styled bourbons you might automatically think of well known names such as Jim Beam, Four Roses, Bulleit, Makers Mark or Wild Turkey. This bottle of Kentucky Vintage Bourbon from Kentucky Bourbon Distillers Co is anything but well known and anything but mass produced. This bourbon is sold as small batch and individually hand labelled.

This whiskey itself is matured for longer than most standard bourbons at a whopping 8 years. Other bourbon expressions are matured for the minimum 2 year term in order for the spirit to be labelled as Bourbon Whiskey.

Nose  - Intense sharp sweetness, bananas and demarera sugar under the grill, oak, warm caramel, cinnamon and star Anise and some sort of citrus note such as lime rind.
Palate- Initial light brush of maple syrup, buttery, back to the sugar from the nose, treacle tart, lots of vanilla extract and sultanas
Finish- Medium length, very warm but then quickly fades to delicate notes of candy floss (or since we're going US cotton candy!) and slight oak and smokiness.

Next up on our tour was an offering from renowned bourbon producer Four Roses. In this instance it came in the form of their premium bottling, the Four Roses Single Barrel. In this case the bottle was from warehouse NV and barrel 11-3 which incidentally is the same batch that Jim Murray of whisky bible fame scored a whopping 94 points. 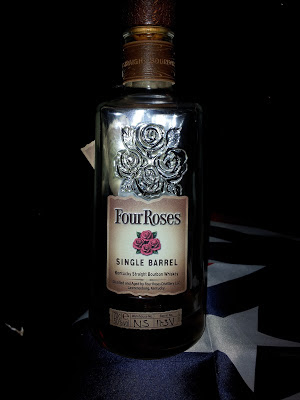 
Nose  - An all together different beast from the Kentucky Vintage. Where the KV was delicate and light the Four Roses is deep and rich. So much going on here, intense plumb crumble, strawberry jam, créme caramel and warm parkin cake.
Palate- A lovely warmth & oily mouthfeel. Definitely feels older than it is. Oreo cookies, another breath of the plumbs from the nose, and a warming cinnamon fragrance leading to a wonderful hint of Peruvian chocolate (yes chocolate really can be that unique!) and finishing off before the tail with black cherry compote
Finish- The cherry lingers before being shouldered aside by a sweet yet powerful Oak. 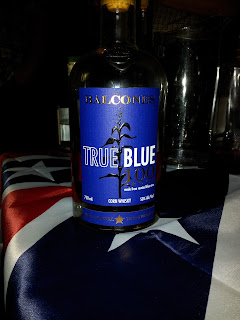 Now our next bottling is a very interesting dram indeed. Balcones you say? Who are these upstarts? Well, Balcones are making shockwaves throughout the Whisky/Whiskey industry. Founded in 2009 by a chap in Waco (yup a town called Waco), Texas named Chip Tate, Chip and a few friends purchased a run down warehouse, went on to make their own stills by hand and started to produce some of the most highly sought after small batch whiskies on the market.

As you can tell from the description above the entire Balcones range is lovingly crafted by hand and only produced in small unique batches. True Blue is one of the best whiskies in their range and is our first purely corn whisky of the night (its worth noting Chip has used the traditional Scottish spelling rather than whiskEy). In this case the corn used is blue corn, hence the name.

Nose  - Heavy and rich, spice, lots of spice, possibly nutmeg. Butter in a hot iron pan, honey, and warm fudge cake.
Palate- Starts off sweet more brown sugar here, then banana bread and Jamaican ginger cake followed by cinder toffee and honeycomb.
Finish- A long and warming finish with a return of the spices, there even starts to be a hint of sweetcorn with salt crystal butter before slowly fading away with a lovely warming glow. 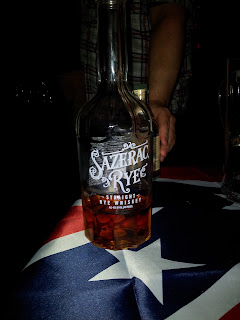 We now move onto our first and only Rye Whiskey of the evening. Sazerac Rye, now produced by Buffalo Trace, was originally named after the famous coffee house in New Orleans where the Sazerac cocktail was invented.

Rye whiskey is named as such as the mash itself used to create it must contain at least 51% rye. This bottling is labelled straight rye as his has been aged for 2 years or over. In this particular case a 6 year maturation. Rye is fantastic in cocktails and is known to be a spicy and punchy offering. Sazerac is no different!

White Dog Mash is a very interesting spirit. This is basically the very same mash used to create the famous (and great value for money) Buffalo Trace bourbon. The only difference is that this particular spirit has not been matured for 2 years to soften and mellow in virgin oak casks. Oh no no no. This bottle of wet death has been taken straight from still to bottle. 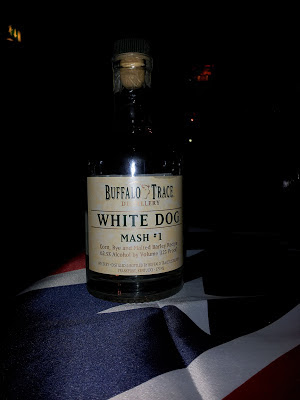 The mash itself consists of corn, rye and malted barley - the normal mix for a bourbon mash.
It's no wonder this is only bottled in very small bottles and again, very small batches!

Nose  - Initially thinking 'oh god what have I done' before realising there are layers here. Lychee syrup, cocoa dusting and bakewell tart.
Palate- Surprisingly smooth, obviously not to the extent of a matured bourbon but considering the mash involved and the abv there is more sugary syrup, a bit of rough cut marmelade and pepper.
Finish- Quite short but peppery and warm, this is everything that the Baijiu could only wish to be!

We had a great selection here tonight, 2 bourbons, a unique corn whisky, a wonderful rye and finally a little bit of white lightening! I think overall the vote was ties between the Sazerac and the Four Roses but all the drams both Whisky and Whiskey alike stood up to the scrupulous tastebuds of the MWC members.

Until next time!
﻿
Posted by Manchester Whisky Club at 7:07 PM