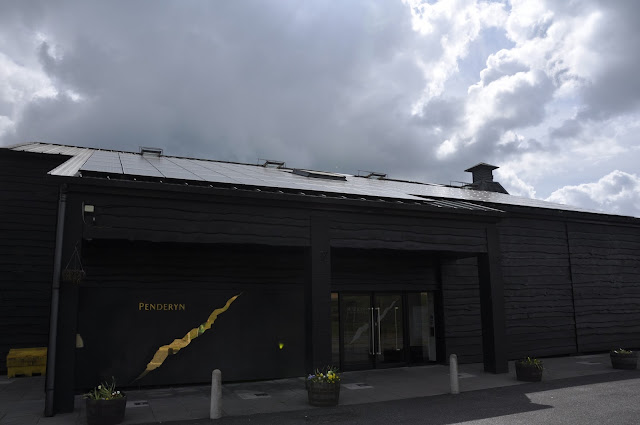 On the 26th July Charlie, Dave and Andy (and Kirsten), set off on an exciting journey to the Brecon beacons. Armed only with 2 cameras, 4 coffees, 2 packets of Oreo's and a Vauxhall Astra. Charlie had arranged a special visit for us to the only active Welsh whisky distillery in existence. Penderyn.

After a 2 1/2 hour journey thanks to Dave's ability to time travel, we arrived at the distillery in glorious weather. 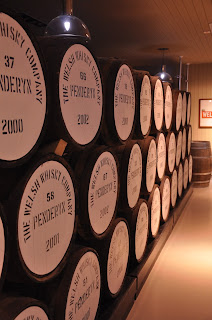 We were met by Laura, Penderyn's up and coming distiller who started her career at the distillery after finishing university and applied for the job on a whim. However after impressing with her abilities to discern flavours and layers in the Penderyn spirit, Laura became the company's first and one of the country's few female distillers.

We started the tour and Laura took us through the distillery's history and the background behind Welsh Whisky over the last 100 years. Penderyn was established on the cusp of the millennium in 1998 by a group of friends. Their acquisition of the unique Pot still, designed by Dr David Faraday, descendant of the famous Victorian scientist Michael Faraday, this particular still operates on a very small scale producing only 1 barrel of spirit a day. The malt for the spirit is provided by Cardiff brewery S A Brain and the water used comes from the distilleries very own spring located underneath the premises.

Penderyn was in the middle of a re-fit with a new still being installed effectively doubling capacity over the next few years so no spirit was being distilled on that day. However it was interesting to see it in this way and was brilliant to see the distillery's expansion in process. The still had been commissioned by Forsyth's of Scotland who also made stills for other famous distilleries such as Bowmore on Islay.

Laura was a fantastic host and took us through Penderyn's history and their ever-growing range of products. We got to stick our heads in examples of their Bourbon, Port and Peated barrels which was an interesting experience to say the least! We were then told a story about a company who claimed to be a Welsh whisky distillery.. but who were actually buying in Scotch whisky and adding welsh herbs and botanicals! On the tour you really get a good idea of how Penderyn forgo the big guys approach and concentrate on quality, not quantity. Each batch of spirit initially comes out at 92% vol, this is the highest % of any UK malt whisky prior to being reduced.

The next part of our tour was the things that dreams are made of. Charlie had been speaking with Stephen, Penderyn's MD who, with Laura, took us through a tasting of pretty much the entire Penderyn range. Now first off, from our name you might be able to tell that we're generally a whisky club. We drink whisky, and lots of it. However  today was different not only did we get to sample 5 delicious drams, but 2 gins a vodka and a great little liqueur. So without further ado. Let's get tasting!

The distillery's flagship bottling. After being matured in ex bourbon casks from Buffalo Trace the whiky is then finished in Madeira wine casks.

The Portwood was a result of cask experimentation. originally designated for sale on the continent, its popularity soon ensured the UK being granted access to this fantastic and unique dram.

Nose- A sharp, prickly but pleasant dry sweetness, raspberry vinegar, black cherry and polished wood.
Palate-  More fruit now, ranging from blackberry and more cherry to a slight citrus edge. The Port comes to the fore with a dry and refreshing character.
Finish- The finish is long and lingering with that dry sweetness continuing with a slight tang.

The Sherrywood is again, matured in Bourbon barrels but this time finished in Olorosso sherry casks.

Nose- Rich yet light, with Manuka honey, cinnamon, raisins and a delicious herbal note.
Palate- Ginger makes an appearance here too, fruit cake, marzipan, and a perfect amount of sherry balance keeping the dram rich yet with a light profile.
Finish- Enveloping with long oak and sugar notes

Penderyn's peated offering originally came about in a mix up over casks. People from the distillery were sent up to Scotland to buy some casks and inadvertently purchased Islay whisky casks! The result? Well let's see..

Nose- Initial light vanilla and a mouthwatering citrus note, then a subtle luscious peat makes a gradual appearance.
Palate- The smoke continues on the tongue as well as the vanilla, and a malty transition to the finish
Finish- Medium length with the smoke gently tailing off and a spicy note develops. 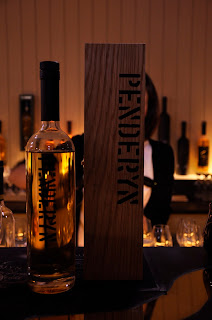 
Penderyn's single cask offerings are generally made up of the older spirits in the warehouse. This bourbon matured cask was matured for 12+ years (from memory) and displays the fantastic individualism of the distillery and its spirit. This batch is limited to just 241 bottles.

Nose- Beautifully balanced with shedloads of vanilla, demerara sugar, cinnamon, spiced pear and digestive biscuits.
Palate-  Refined and rounded, grilled banana and brown sugar, raisins, again with a slight touch of pepper corn. With water - opens up in a flourish of vanilla and orchard fruits, possibly a touch of elderflower?
Finish- Very long and satisfying, the bourbon cask influence continues and is kept in line with a wonderful wood edge. An incredible whisky that Stephen, Laura  and the team can be proud of!

After tasting the range and a brief stint in the gift shop where a bottle of the Portwood went on the credit card, Stephen and Laura had a proposition for us. And we soon found them pulled up outside the distillery in a car. Adventure beckons.

After a brief drive we turned off onto what looked like an average ageing industrial estate when all of a sudden.. 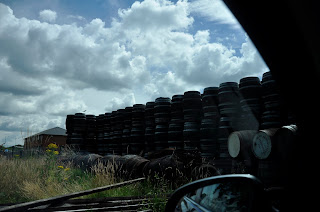 We had arrived at Penderyn's main warehousing and bottling site! 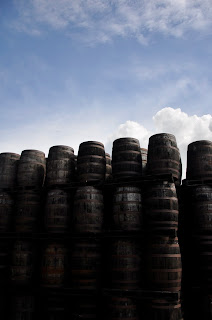 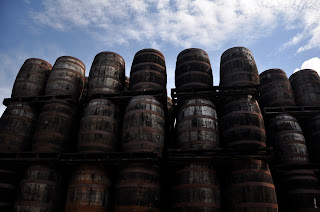 This is the type of thing that makes a whisky geek's hair stand on end. Driving through avenues of stacked old casks ready to be refurbished before use by the company's cooperage. Those stacks were the sort of maze you could quite happily get lost in and reinforces the scale of whisky production even for a relatively small distillery such as Penderyn. The oddly quiet surroundings all added to the atmosphere. This isn't part of the normal tour, this is normally off-limits to visitors so we felt very privileged.

Stephen took us through a door and we were wondering what awaited us. After donning a very Health and Safety friendly fluorescent vest each, Stephen and Laura showed us the newly housed bottling equipment.

Then on from there, the main event. The warehouse. After walking through a wall of plastic sheeting akin to what you might see in a science fiction movie from the 70's, we were greeted by the smell of damp, whisky infused oak.. and this.. 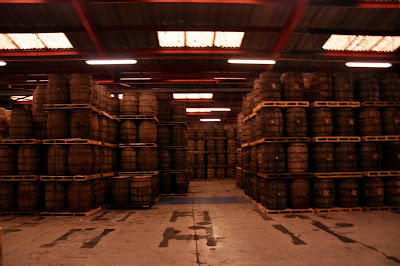 Now it's not often I find myself caught short or discover I've left something on the kitchen work top.. but what I was really lacking today was a small hand operated drill, some plastic tubing and a few bottles. The majority of the casks in the warehouse are ex-Buffalo Trace bourbon casks, we met a members of staff who were going about their day to day tasks and were clearly passionate about the distillery and Penderyn itself which was fantastic to see. 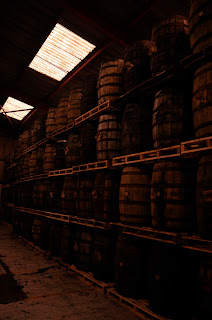 There is a mixture here of spirit distilled within the last 6 months and 13 years since the distillery's inception which was great to see as it was as though we were seeing Penderyn's past and future in the flesh.

Penderyn doesn't just seem to be about the whisky, there's a real community spirit here on all levels. Stephen and the team are doing some fantastic work and with the recent expansion plans we all foresee Penderyn going on from strength to strength. The new still has since been installed and a new spirit safe delivered.

We can safely say that we're very much looking forward to seeing what comes through Penderyn's doors over the next few years and wish the team the best of luck!

On another note Charlie, Andy, Dave and Kirsten would like to say a huge thanks to Stephen and Laura for making us so welcome and treating us to every delight that Penderyn had to offer. Sláinte guys!