Summer is on the decline, but still millions flock to the UK's airports to jet off to countries to sample delights such as miles of golden sandy beaches and turquoise seas. Or, in some cases; €0.50 shots of cheap sambuca in a nightclub where the music is too loud and the frivolity seemingly extensive.

One subject we are yet to touch on is world whisky. 'World whisky?' We hear you cry? Yes. Besides Scotland, Ireland, The US and Japan. There are a wealth of distilleries spanning across continents that you might never have thought would distill whisky in your wildest dreams. So we thought, instead of going to these far and distant lands like explorers of a past age, why not bring these countries to us? So on the 26th August 2013, we plotted a course for the unknown and set off on our journey.

We had a selection of 6 whiskies in total across the night spanning 3 continents. With spirit originating from countries bathed in sunlight to others where the anorak is a bestseller all year round.

First up was an entry from Sweden!

Mackmyra was Sweden's first whisky distillery. Set up by friends from the University of Stockholm in 1999, Mackmyra is starting to make a name for itself with it's unique small batch releases. Set among tall Swedish forests Mackmyra makes for a pretty picture. Matured in Virgin Swedish oak casks.

Next we had something very different in store. When someone says Africa you might think of the rolling savannas of the Serengeti or the rain forests of Congo or Gabon. But, would you ever imagine a quaint looking distillery in a picturesque setting? With a wild bird habitat to its side and the sun beating down, sits the James Sedgwick distillery in Wellington, South Africa.

Nose - Remarkably punchy for a 43% spirit, dried fruits, nutmeg, a dying wood fire, toffee.
Palate - Oaky and very full, a slight tightness in some notes released well with one or two drops of water to bring out more toffee and spiced plums.
Finish - Again the oak reigns supreme here, a very full and intense dram. 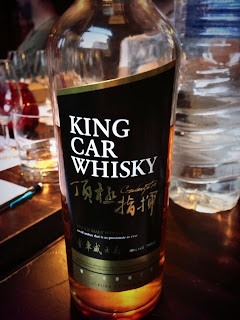 Next we move onto another country not associated with whisky in any sense of the word. Taiwan, and to the Kavalan Whisky Distillery.

Now, this is an interesting dram in many senses of the word. Kavalan themselves have been releasing some top quality whisky recently and in this instance the distillery's holding company - King Car have stuck their oar in. They have created this, the King Car Conductor as a 'well rounded whisky to represent their well rounded company'. That's because King Car aren't just distillers, they have involvement in shedloads of fingers in even more pies. Such as.. the Pharmaceutical industry, chemical manufacture & distribution, soft drink manufacturing, instant coffee manufacturing, biotechnology, molecular biological research, the list goes on.. and on..

Nose - Ripe rich fruits, a musky wood undertone and then from nowhere a clear cut malt spike
Palate - A nice thick mouthfeel, initial deep sweetness akin to heather honey and molasses, the wood from the nose rears its head alongside tangy fruit and fresh buttery caramel in the hot pan.
Finish - Quite long, a quenching dryness that pulls along with a dabble of mango and biscuit base. 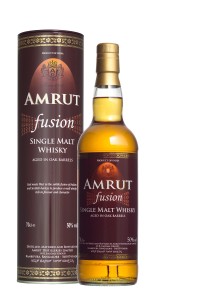 Next we headed over to India and to what is possibly India's most famous distillery - Amrut. Based in the close and fiery temperatures of Bangalore, Amrut has been making real in-roads in the whisky market in recent years. Due to the hot climate of India, Amrut and other Indian distillers experience a higher loss of spirit during maturation - also known as The Angels Share -than it's European counterparts. This normally equates to around 10-15% compared to around 3% in Scotland.

A plus side to the temperature is that this allows the whisky to mature much faster than it would in a cooler climate, meaning a much younger whisky will display character more akin to that of an older bottling.

Named as such as the Fusion uses 25% peated Scottish barley and 75% non peated barley from India, creating in essence a fusion of styles and countries themselves.

Nose - A big profile here thanks to the 50% strength. A lovely interplay between soft peat and sugary barley notes, the slight hint of exotic spices and all the while citrus layers play a soft ambient tune in the background.
Palate - Oak at the fore, dark chocolate and nuts, sherried dates and that delectable peat makes a welcomed return.
Finish - Looooong, very much the citrus notes playing again here, the peat now just a whisper playing across the tongue.

Yes you heard, English Whisky! 2 words that might strike fear into the hearts of Scotch whisky lovers everywhere. However don't be fooled, the chaps at the St George's distillery in Norfolk are doing a lot of things right. From using locally sourced Norfolk barley, their own floor maltings and the water coming from a source underneath the distillery itself. It was also great to see such an informative label stating the date of distillation, cask number and even the person who distilled it! In this case, head distiller David Fitt.

Chapter 9 is the distillery's first peated offering, most of the EWC spirit is still in it's early stages and from memory all releases so far have been 3 yrs old.


Nose - A lovely medley of lemon peel and vanilla, lemon curd tart and also savoury elements like Polish Kabanos and smokey bacon crisps all in tune with a delicious peat note.
Palate - Thick and luscious for a 3 year old! Again sweet and well balanced, cola cube's, vanilla, almost a Cornish vanilla ice cream, with the peat a constant but not invasive feature. A very well balanced dram.
Finish - Long and warming with more fruits, both citrus and green. The top of an egg custard with its ground nutmeg, the peat bidding its final farewell edging into a powerful spicy finish.

As we've already covered this one in our previous blog post here; we will use our notes from that
previous tasting with slight adjustments that were picked up on


A fantastic range all around and really went to show the differing styles of each country and the edge that the distilleries all brought to the table. This certainly must be giving some Scottish and Irish producers food for thought as it has become clear that as Whisky continues it's massive world wide surge in popularity, distilleries across the globe have taken note and have started to produce some fantastic spirits. Long may it continue.