Our 9th club meeting was dedicated to Scotland's Highland region.

Some of the world's most popular brands stem from this large and picturesque area and quite rightly so. Highland malts often have a reputation for big chunky flavours but can also offer very delicate and rounded treats in some cases. 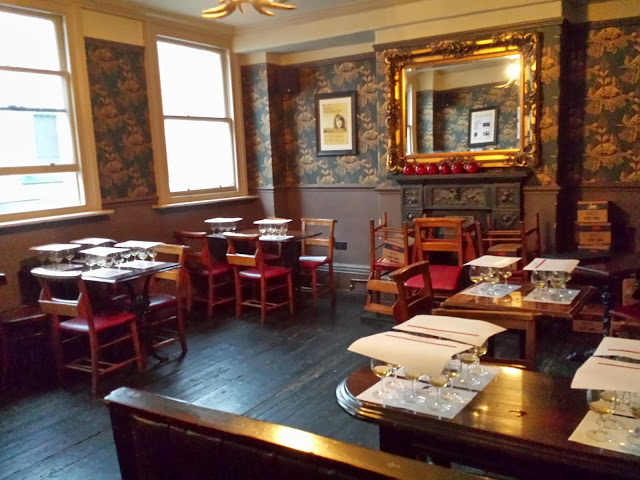 This time though we did things a bit differently. We were going to taste the malts blind so nobody knew what was being tasted until each had been finished and revealed. This is a great way to really get to grips with a whisky. Sometimes opinions and even the tastes themselves can be affected by previous experience or even prejudice with a brand.

So when everyone was assembled we cracked on. 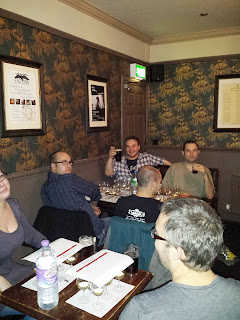 The first dram we looked at was light in colour, whisky boffins might refer to it as 'golden straw'

Palate - Initially the malt from the nose dominates the palate, however as Matthew pointed out, some green fruits begin to make an appearance with toffee.

Finish - Quite long, more toffee with lingering notes of digestive biscuits and cream.

Suggestions for what distillery this might be from included Edradour (Adam), Old Pulteney (Katharine) and Glen Garioch (Anna), so, what was it?...

This was revealed as being an 11yr Dalmore! Bottled at 46% by by Douglas Laing & Co for their Provenance range with no added colour and being non chill filtered this is one Dalmore that shows what this distillery is capable of without adding bucket fulls of E150a colouring and keeping the spirit above 40%!

Onto the second dram. This was a very rich and playful golden colour in the glass.

Nose - We had lots of people mentioning various types of fruit, pears, orange, citrus, but quite a few claiming some tropical fruit notes including mango and pineapple. Interesting. Again, lots of spice content here alongside perhaps a slight wisp of smoke and honey? A very complex and satisfying nose.

Palate - More spice here, Stina noted the salty/brine notes and then came the fruit again, some still maintaining it's tropical edge. Again is that a slight hint of smoke in there? Not peat but smoke itself.
Hmm

Finish - Again, long and spicy with notes of nutmeg.

The prize goes to Matthew! This was revealed as being a 15 yr old Clynelish single cask (#6470) from London Wine & Spirit Merchants Berry Bros & Rudd! Again bottled at 46% without added colour and no chill filtration.

After the delicious Clynelish everyone was looking forward to what appeared to be one of the darkest drams of the night. This appeared in the glass as a lovely deep copper.

Suggestions for this one.. Glen Garioch (Anna.. seeing a pattern here), Ben Nevis and Oban

This was revealed as the Glencadam 21 yr old. The distillery bottling and bottled at 46%, this displayed impressive depth and was very well rounded.

The next dram appeared a lot lighter in the glass so straight away raised a few eyebrows.. surely lighter means not as deep and flavoursome yes?..

Finish - Quite long again with that slight cream note carrying a lot of lovely spice and a wave of fruit.

Nobody really had any ideas as to what this dram might be.. so this was revealed as being a 19 yr old Deanston from Master of Malt's single cask range. Bottled at 53.4% with no chill filtration or added colour. Yum 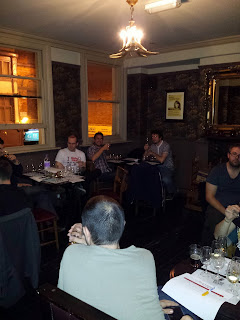 Now came our final dram of the night. With a colour akin to the Glencadam this was still relatively light compared to most whiskies.


Nose - For a start there were lots of muffled noises of appreciation and 'hhmm' 'oof' and 'aah'. Honey, biscuits (Martin), a very savoury edge to it, some sort of gamey meat? An unusual quality ina  whisky. Herbal again, heather all the while a playful apple strudel note phasing in and out.

Palate - What's this, a partner in pepper crime? Pepper seemed to be the order of the day again here with rainbow peppercorns noted (Peter), a delightful deep rich fruityness akin to a black forest gateau and brandy soaked raisins.

Finish - Looooong, I can still almost taste it as I type this. Oak influence creeping in here but retains a lot of its fruity character pulling through with vanilla cream with apple & blackberry crumble.

Now again this one was a bit of a mystery.

Its a Glen Garioch (pronounced 'Glen-Geery') Another single cask offering from Master of Malt, this time a 20 yr old bottled at a whopping 58.8%. Nobody could believe its strength and all agreed that it can easily be sipped at its bottled strength. 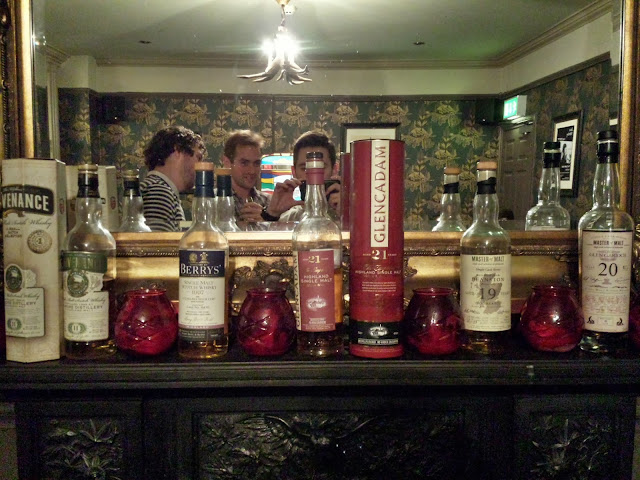 Overall a fantastic and varied line up that really showed why Highland whisky is so popular. On another note it was great to see household names (such as the Dalmore) in a much more natural way without any chill filtration or added colouring! That's how things should be.

We'll be back with another blog post soon covering our Paul John whisky tasting back in September!