Smoke in the Water

On all hallows eve 2013, the Manchester Whisky Club met to take on an array of peaty whisky head
on.

This was our first fully peated lineup featuring 5 drams not only from peat's spiritual home of Islay but included a few surprises from elsewhere too. Where? Let's have a look...

First up we started off with one of the new releases of 2013. Highland distiller Tomatin (whose core range we tasted back in February), have just released their first official peated release. 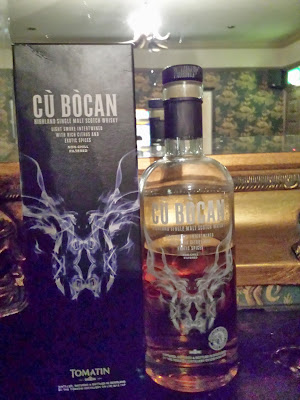 Named after a mysterious specter in the form of a large black dog that is described as being seen 'once in a generation', that was supposedly sighted one night by a distillery worker many years ago. He was relentlessly pursued by the beast when, in an inexplicable moment of madness he turned around and

faced the creature. He extended his hand and upon touching the large black tooth bearing hound, it vanished in a puff of smoke that then crept back along the peat moor... So, all that nonsense aside on to the whisky.

Nose - We had notes of vanilla, slight almond, and some mentioned citrus content.

Finish - The finish is quite long and lingers. Some sugary and vanilla notes associated with the bourbon aspect of its maturation are present.

Peated at 15ppm this is light and delicate. In all honesty a few people commented more emphasis had been placed on the packaging and marketing than the spirit inside. 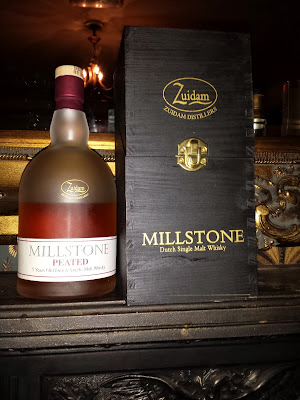 After being revealed to the club after tasting. This one caused a bit of a stir as not only was this not an Islay whisky, but wasn't even from Scotland or the UK!

Nose - Quite spicy and close, a bit clunky if anything. Notes of blood orange, blackberry, pepper and a bit of cream. There is a constant burnt log background to it. A burnt oak log covered in blackberries and cream if you will...joking.

Palate - A rich peated note makes itself known immediately with honey and Tunnock's wafers and a spicy punch.

Finish - The peat lingers alongside cloves and plenty of wood influence thanks the the american oak barrels used for the malt's maturation.

Overall a pleasant surprise for everyone! From memory no-one in the room had tried any dutch malts previously and provided our first hint of peaty things to come!

Next up a very interesting bottle of whisky. Bunnahabhain is well known as being one of if not THE lightest peated spirit from Islay. However, here they have taken a different approach to their 'Gentle alt' approach and have released a heavily peated Bunnahabhain! 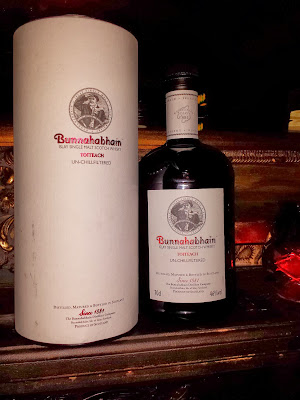 Nose - The nose was a tough one, everyone noted how musky and closed it was. Some notes of polished oak, a bit of dark chocolate and burning tyres..hmm

Palate - A completely different story here and this is where the Toiteach (Gaelic for smoky) came into
its own. Notes of burnt raisin, treacle toffee, cloves, and the punchy peat. Now when we say 'heavily peated Bunnahabhain' we're not talking Laphroaigian or Ardbegian levels here but for a Bunna it's got teeth. The peat worked wonderfully alongside notes of milk chocolate and roast chestnuts.

Finish - Long and rich, the peat starts to soften now with plumb crumble and black cherry.

An interesting Bunnahabhain for certain and whilst not throwing as many peat punches compared some of it's Islay counterparts, this 11yr old malt certainly stands up well. An interesting contrast between nose and palate as the nose certainly wasn't the best start.

Now. What's this? A peated Speyside whisky? Are you mad? Nope... well.. a bit. But peated whiskies have been leaving Speyside's green lands for many generations. In fact, it is aid that back in the late 1800's and early 1900's Speyside's staple style revolved around peated malts. Not the rich sherry monsters we know and love today. 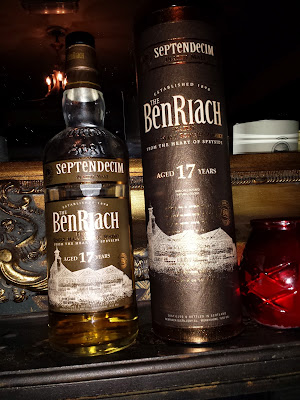 BenRiach are one of the few independent distilleries still in operation and have in fact been so successful they have since bought GlenDronach and Glenglassaugh distilleries. The majority of Benriach's expressions are non peated with many sherry finishes, rum finishes and wine finishes. However, our of 2.3 million litres of spirit that the distillery produces, around 150,000 is peated and the distillery only runs peated spirit for 6 weeks of the year.

Nose - Playful and sprightly for a whisky of its age. Rich vanilla, orchard fruit and lots of heather honey with a lovely rounded peat note throughout. There are Speyside notes here that give hints to its location.

Palate - A thick oily mouthfeel (always a good sign) carries a fantastic spicy warm peat through onto the palate. The peatiest so far in fact and with it came cinnamon, lots of malt and cereal with yet more honey and salted caramel.

Finish -  The gift that keeps on giving. Pink peppercorns, and golden syrup with the peat slowly fading. Delicious.

A fantastic BenRiach which really shows off the distillery's diversity. The 17 offers a lot of bang for your buck and BenRiach can hold their heads up high with this release. Impressive.

Kilchoman (pronounced Kill-ho-man) is Islay's smallest and most recently established distillery. The 100% Islay is named as such as the whisky is made from barley grown on the distillery's farm location, then malted, distilled, matured and bottled there too. So this whisky has been made form start to finish on site. Very impressive. 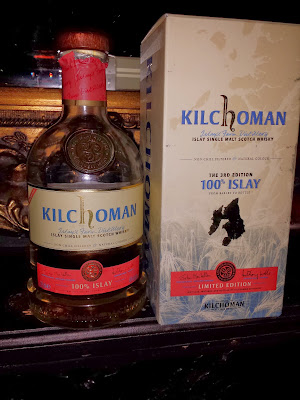 Bottled at a healthy 50% this is a 4 year old bottling matured in bourbon casks from Buffalo Trace and is actually a vatting of 4 & 5 year old whisky. Kilchoman's capacity currently stands at around 150,000 litres a year and was established in 2005.

Nose - Haylage, spiced pear tart, kelp, lemon syrup and slight vanilla alongside a savoury grilled meat note, with the peat only fleeting at this point. Merely a hint as to what is to come?

Palate - A very oily consistency and the peat makes itself known here with a smoky ensemble. Quite a dry smoke it is too with one note describing a cigar rolled on a ladies thigh by one person in the room (a lady herself). Besides the ladies thigh we also had mention of grain and cereals and crunchy green apple.

Finish - This all leads to a not insubstantial finish with the peat continuing through but giving way to light syrup notes, orange and habanero  pepper creating a lasting and warming impression.

The Kilchoman was received with mixed review with some feeling it was lacking in variety and overpriced for the contents inside.

Another night down for the club and as usual, and quite rightly, opinion was split. These varying bottlings went to show what different production methods, cask finishes, strength and even location can do to differentiate peated spirit. Great fun all round!


We're in for a treat in November with 2 brilliant tastings lined up. With our next post covering our recent tasting hosted by the lovely chaps at Penderyn, coming later this week, with our Campbeltown tasting coming at the end of the month!


We'd like to point out all opinions expressed through this blog are exactly that, our opinions!