At the end of November we held another one of our now legendary tastings dedicated to the small and often overlooked region of Campbeltown in Scotland. Campbeltown is one of if not the smallest whisky producing region in Scotland.

In the late 1800's and early 1900's Campbeltown was known as 'The Whisky Capital of the World' as over 20 active distilleries operated in a very small area. However, since the demand for Scotch whisky in the US was so high, the quality of the spirit produced by the majority of the distilleries was very low.

When Prohibition was implemented in the US, most of the distilleries in Campbeltown closed. They could no longer sell off their stock and for those distilleries that had kept the spirit quality high could sell to the UK market generally speaking.

We've covered whiskies from every area except this to date so now we jumped in with both feet to sample some of the delights from the Mull of Kintyre.

Kilkerran is the trading name of the recently opened Glengyle distillery operated by J&A Mitchell of Springbank fame. The distillery was one of those affected by a culmination of Prohibition and the great depression.

However, Glengyle has been operational now for over 9 years and have been releasing these 'Work In Progress' bottling's as a way  not only to introduce people to the brand but also as a way of contributing to keeping the distillery going.

A very spicy, creamy and punchy 9yr old whisky this. This year is the first time Kilkerran releases have come as a pair! One matured in bourbon casks and another in ex sherry casks. The bourbon caks dram offers not only the spice mentioned above but also fresh green apple notes and a lovely vanilla overlay.

This is a very good whisky indeed and you can easily see the quality of the spirit that J&A are putting into this. More official releases will be on their way when the stock matures. I can see great things coming through Glengyle's doors. 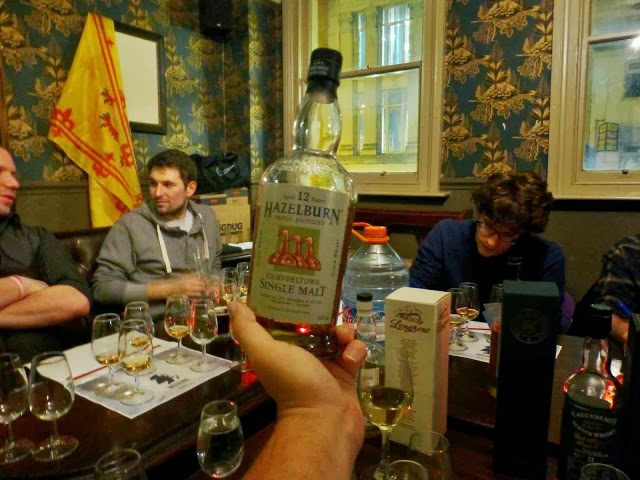 Hazelburn is actually distilled at the famous Springbank distillery. Whereas Springbank and its smokier brother Longrow pack a peaty punch, Hazelburn is the Distillery's un peated bottling. Hazelburn is named after another of the now defunct Campbeltown distilleries.

The spirit is distilled 2 and a half times, almost akin to triple distilled malts such as Auchentoshan and a lot of Irish whiskey. However, not quite.

This malt carries a very fresh, salty sea air element reminiscent of an Islay or North Highland malt. There is also toffee, fresh porridge and honey on show.

Originally founded in 1832, Glen Scotia has a bit of a patchy and unfortunate history. In 1930 the then owner of the distillery, Duncan Macallum, took his own life after losing a lot of money in a dodgy business deal by drowning himself in a local loch. Nice. 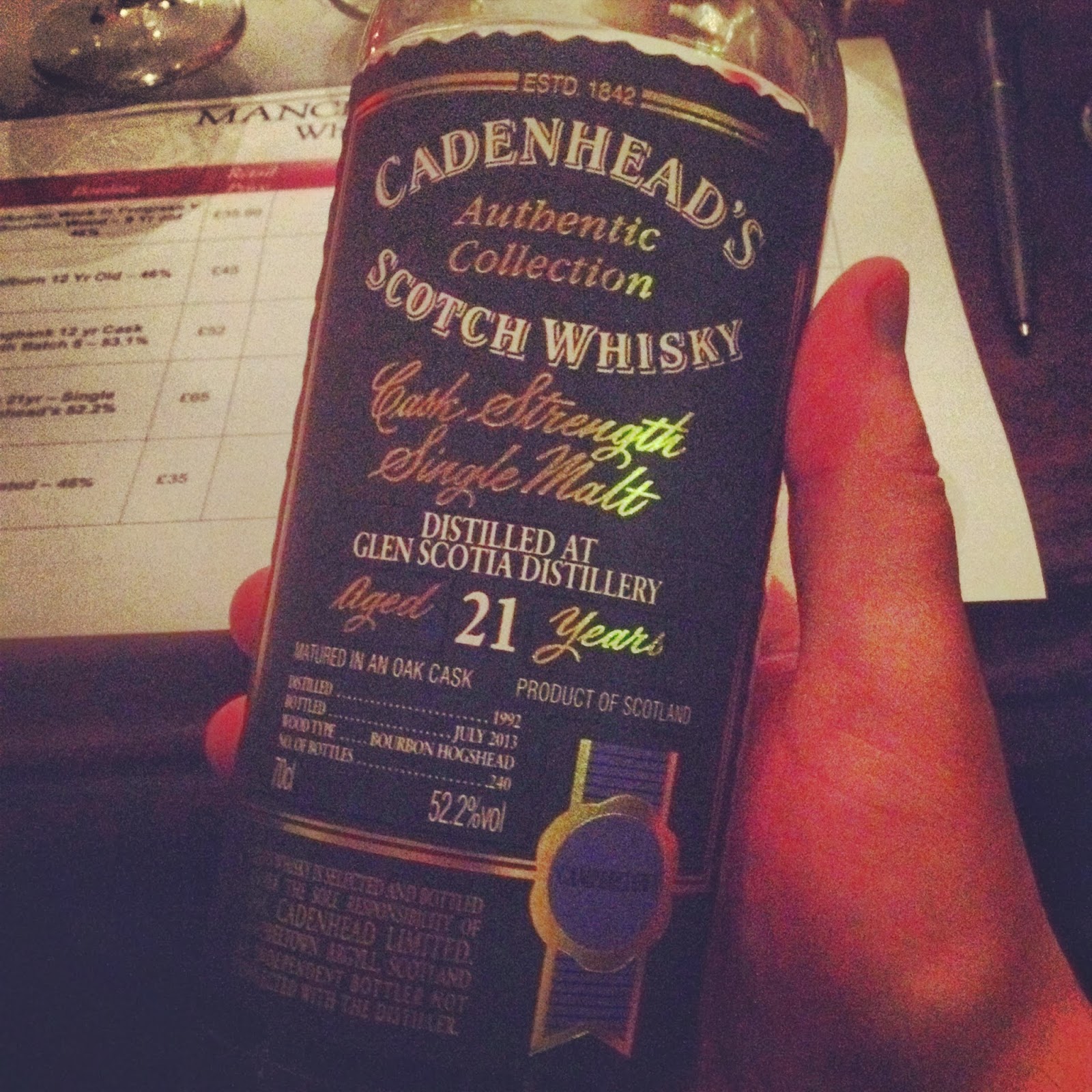 Glen Scotia has been mothballed several times and reopened. Most recently a stint in the 1980's.

This 21 yr old has been bottled by Cadenheads and comes from a single ex bourbon hogshead cask. It displays notes of haylege, cream and apple whilst retaining salty character and slight frames of smoke encasing the whole thing. A pleasant and interesting dram. 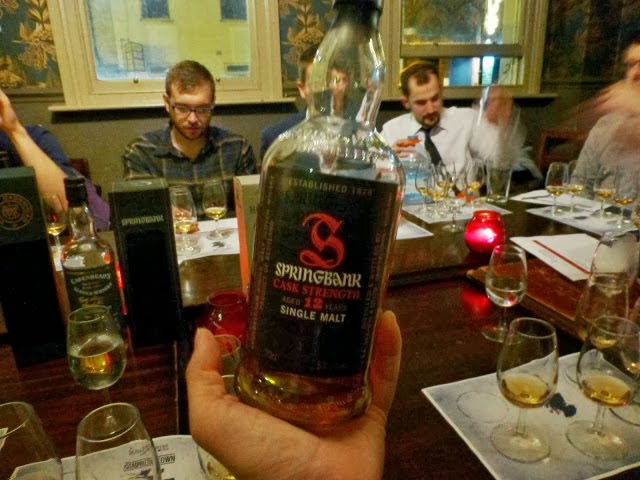 There are 3 different Malts distilled at Springbank distillery. However tonight we looked at just the 1 to carry the Distillery's name on the label. This was Batch 5 of Springbank's 12yr old Cask Strength range.

Springbank malts its own barley on site, one of the few distilleries still to do so in Scotland, it also contains an element of peated malt providing a well rounded and chunky character.

This particular bottling was very up front in its intentions and exploded with pear, salt, chunky toffee, grilled toast, and with a long and lasting finish warming till the end yet retaining a surprising smoothness throughout.

Longrow is the third and final malt to be distilled at Springbank. This bottling is one of the newest additions to the range and is a heavily peated no age statement single malt. 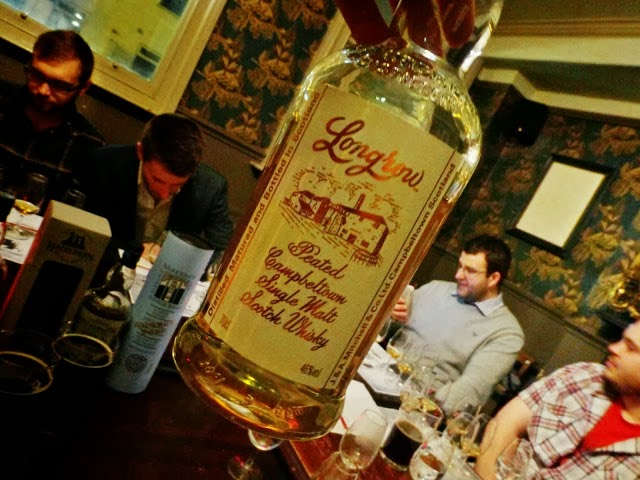 There are other expressions of Longrow including a delectable 18yr old but with this particular bottling coming in at a very reasonable £35-£40 it would be very rude not to give it a go.

The Longrow was at first quite tight and only giving away hints of what was to come. There was woodsmoke on the nose alongside ginger snap baskets and fresh bread. Then surprisingly citrus fruit and nuts. The palate carried through with a good mouthfeel and charred naan, salt, white pepper and vanilla sponge.


Out of the lineup the Springbank CS Batch 5 was the standout winner closely followed by the Longrow and Kilkerran. A great example of what variety such a small region can bring whilst retaining character and recognisable characteristics. 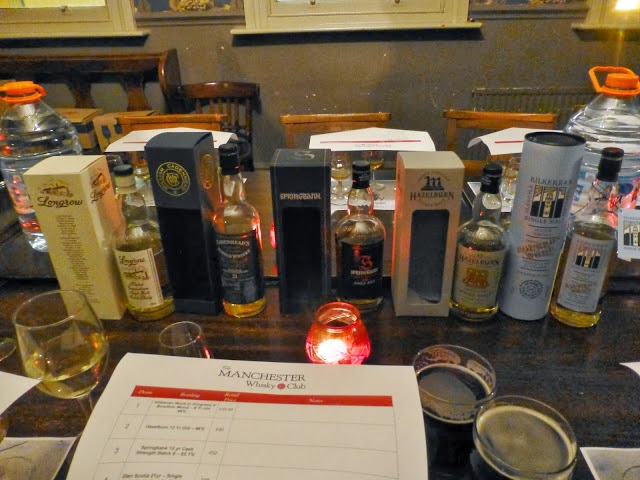