24th July saw us tackle a line up of whiskies from across the commonwealth in conjunction with the Commonwealth Games. 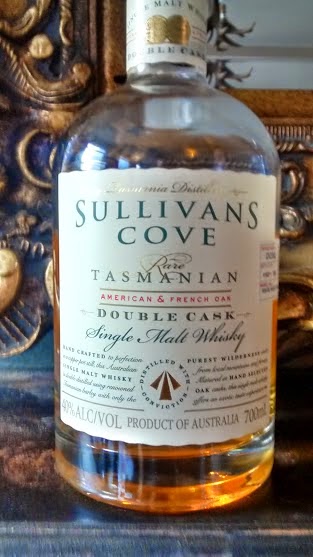 First up we tried the Sullivan's Cove Double Cask, a Tasmanian whisky matured in both American and French Oak.

Australians are well known for their competitive nature when it comes to sport whether it be Cricket, Rugby or Tiddlywinks. Likewise the Australian whisky industry has flourished and has recently been making real in roads into the world market like a momentous scrum pushing into Scotland's half.

The Double cask is a vatting of 3 different single casks from the distillery.

The nose is velvety with the unmistakable notes of rich Cognac and milk chocolate. The French oak lends well to Sullivan's base spirit.

Onto the palate and this dram is a completely different beast! Now the American ex bourbon casks come into their own, vanilla, spice and a warm toffee note.

This was certainly a dram of 2 halves, coming in at an RRP of £65, like all 'New world' Whiskies part of what you pay is the air miles getting it to the UK. If it was touching the 46% mark and cost a bit less the consensus was that it would be a good bottle to have on the shelf.

Next up just a hop skip and a jump away from Australia and we're onto New Zealand, home of the Mighty All Blacks, Lucy Lawless and the Lord of the Ring's The Shire. 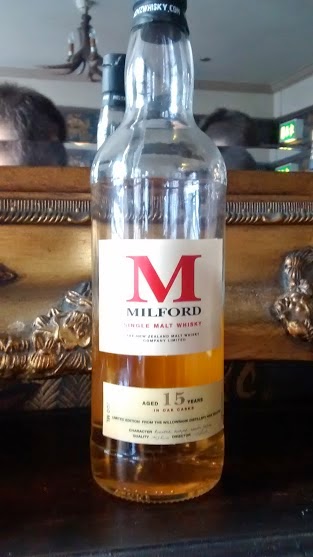 There is no distillery called Milford, in fact his bottling is that of the Willowbank Distillery in Dunedin on New Zealand's South Island that closed it's doors back in 2004. It's always interesting to feature a whisky from a closed distillery.

The whisky was matured in ex bourbon casks for 15 years before being bottled in 2004 prior to the distilleries closure.

Whisky gospel scribe and Panama Hat advocate Jim Murray is a past supporter of certain NZ whiskies. Let's see how this one fairs.

The nose is, frankly, harsh. Spirity and callously dry. There are some notes of banana and brown sugar in there but alongside are ever present notes of nose stinging Birdseye chili... Odd considering this whiskies 15 year maturation.

The palate retains it's form to the letter with altogether shallow and throat stinging onslaught. Not much else to say really..

The finish, well I'll leave that to your imagination.

We picked this up from the Whisky Exchange for £57 and appeared to be one of the last available in the UK from what we've seen afterwards. I think with this dram we saw why this distillery ended up closing it's doors for good.

Can't win them all!

Oh Canada, never one's to blow their own trumpet Canadian whisky has somewhat fallen to the back of people's minds. However this was not always the case with Canadian whisky representing a huge market share in the US and beyond. Think Canadian Club in the hands of Don Draper in the 1960's HBO Series Mad Men. 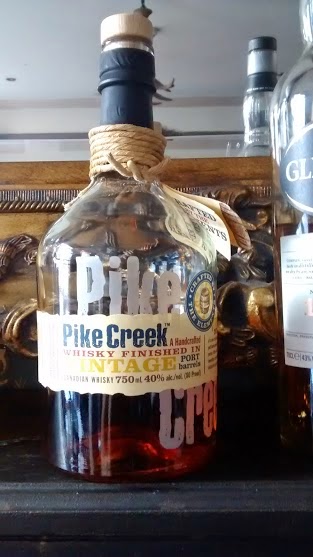 However, Canada is back on the attack with several new distilleries and releases representing a huge increase in Canadian whisky output.

Pike Creek is a No Age statement blended whisky from Corby Distillers distilled at the more than amply sized Hiram Walker distillery in Ontario. The whisky is then sent off to Hiram's warehouses in ontario, interestingly these warehouses are unheated, temperatures can vary from 28C in Summer to around -10C in winter. This results in the casks expanding, retracting etc in the varying temperatures as well as having an effect on the actual speed of maturation.

The whisky is initially matured in American white oak casks before being transferred into ex Port Pipes.

The nose is fruity, very fruity. Think pears, cranberries and blackberries with a slight cinnamon backdrop.

Moving onto the palate, this displays a lot of grain characteristics, vanilla, honey and a touch of strawberry from the nose possibly.

The finish is short but again quite fruity with a touch of oak.

At £48 from The Whisky Exchange this provides an interesting alternative to Canadian Club and Crown Royal, with the added bonus of avoiding that somewhat garish purple faux velvet pouch.


Onto the host nation! You could almost hear Flower of Scotland bellow from the tin as this bottle was 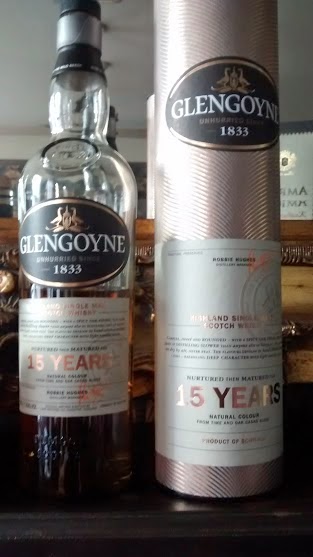 Glengoyne is an interesting distillery in many ways, it is one of the very few Highland Whiskies to use purely un peated barley, it also has the slowest distillation times in Scotland. Your 3rd Glengoyne fact of the day is that despite Glengoyne's Highland status, it's own warehouses right over the road are in the Lowlands showing Glengoyne is only a Highland whisky by the skin of it's teeth/tarmac.

The 15yr is matured in a mixture of first fill ex- sherry casks, bourbon casks and refill hogsheads.

The nose? Altogether more Scottish, heather, quite creamy with toffee and black forest gateaux alongside.

On the palate this whisky retains a thick oily texture that whisky lovers well... love. More toffee here before turning to nutmeg, shreddies cereal and honey.

The finish lends itself more to the oak from the casks with spice.

For £45 at Master of Malt, this provides a very smooth and fulfilling single malt from the modern home of whisky.

To finish we go back east to the sweltering climes of Bangalore in India. We've tried a few Indian whiskies now, this one however has to be one of the most unique.

This was matured in 3 different cask types with one being that of a local liquor delicacy, Bangalore Blue Brandy, but don't let that put you off, the whisky is also transferred into Rum casks (from Amrut's own rum) and Oloroso sherry casks. 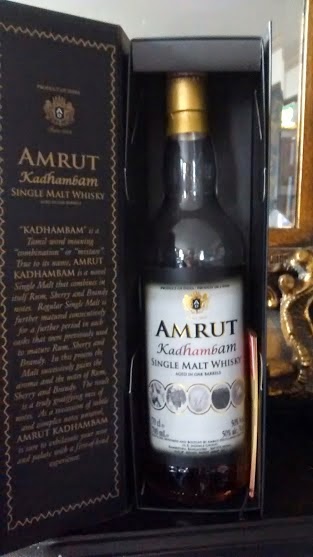 Luckily it seems that Amrut ran out of cask types to mature the spirit in otherwise we could have been here for a a while. A very modern approach to whisky production though which is always good to see.

As mentioned in a previous post the hot climates of countries such as India lends itself very well to the maturation of whisky with spirit maturing at a faster rate than that of one kept in the somewhat cooler and moister Scotland.

The nose is spicy, think cinnamon and star anise alongside brandy butter over a christmas pudding.

The palate is where the 50% comes in to it's own. Raisins, orange oil, cinnamon again and dark chocolate. Oddly a slight twang of a rich, thick Port in there too at times, ironic considering this to be one of the few cask types not used in this whiskies maturation!

The finish is long as you'd expect with notes of leather and oak.

Overall a very unique and tasty dram indeed. Kudos to Amrut for pushing the boat out with some top notch cask experimentation here.


Dram of the night along with the Gold Medal went to the Glengoyne.. but only just! With a well deserved Silver and for the Amrut Kadhambam and the last podium finish and Bronze to Pike Creek.

Overall a fantastic showcase of what whiskies are out there from countries you might not always expect!