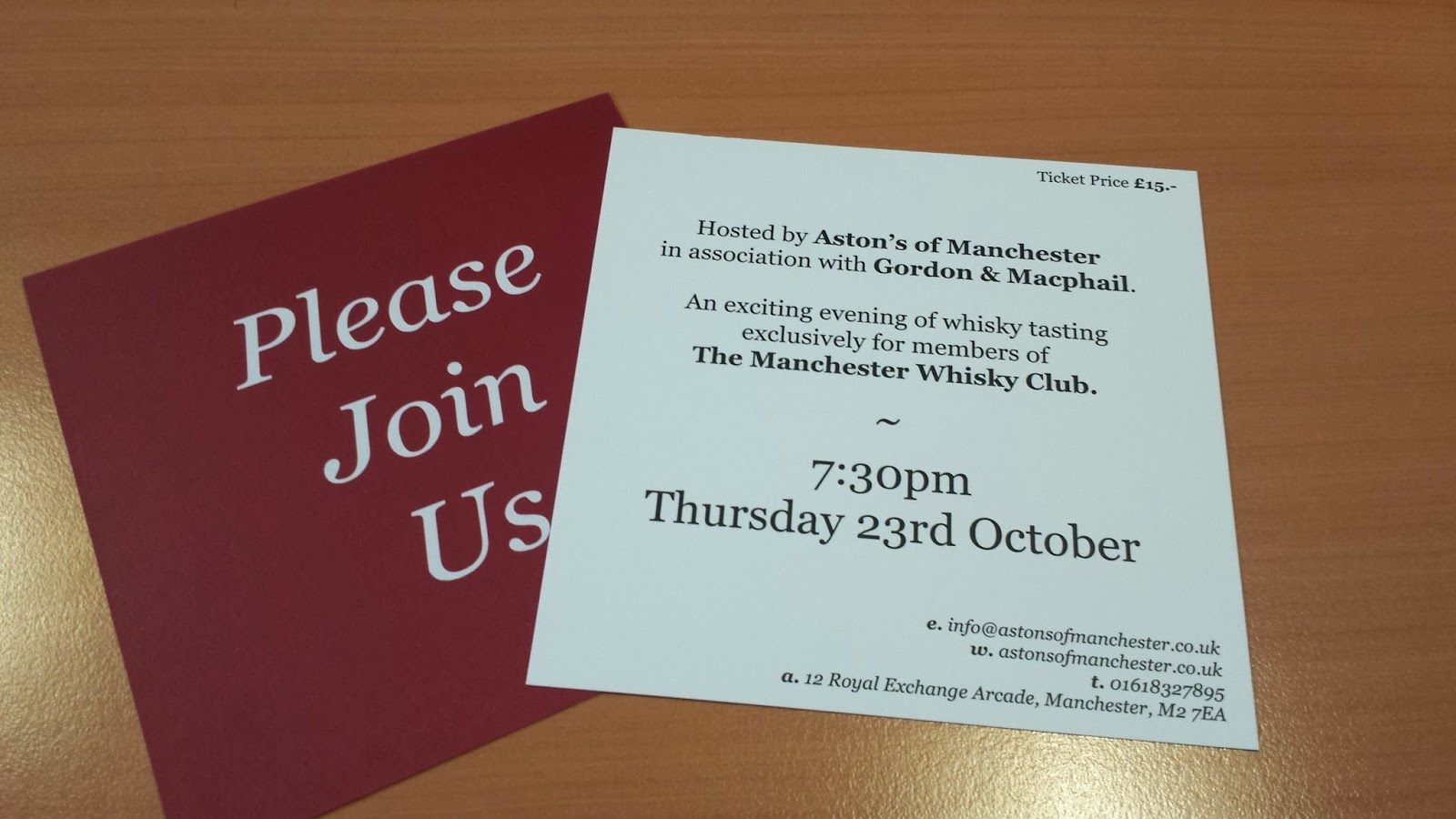 It's been all systems go here at Whisky Club HQ so the blog has suffered some what as a result!

Back in October 2014, we had arranged a night of delectable drams with arguable Manchester's best Tobacco and Spirit merchant - Aston's in collaboration with the independent bottling legends Gordon & MacPhail.

A great crowd of members turned up at Aston's eagerly awaiting oak matured delights being expertly dished out by Mike Fisher of G&M and poorly by Andy. Mike took us through a presentation focusing on G&M's heritage and history and a little background about what makes them one of the best and largest independent bottlers of whisky in the world.

The first whisky we were treated to was a bit of a surprise. A mystery Dram.. hmmm

Some of the thickest legs we've ever seen on a whisky, like treacle! The nose was a continuation of the theme as this was also heavy, thick and cloying with a good richness but retained some light malty qualities... a whiff of smoke was mentioned. If the nose was thick the palate was thicker, a nice toffee and milk chocolate note as well as a touch of that elusive smoke, fruity clumped jam on top of a cream scone. A good oily mouthfeel on this too with a long warming finish.

What was it? Well, like us, you'll find out at the end.

Glenburgie is a little known and yet well used Speyside distillery. The spirit is rarely bottled as a single malt and can therefore be hard to come by. However it is a staple ingredient in the famous Ballantine's Blends. 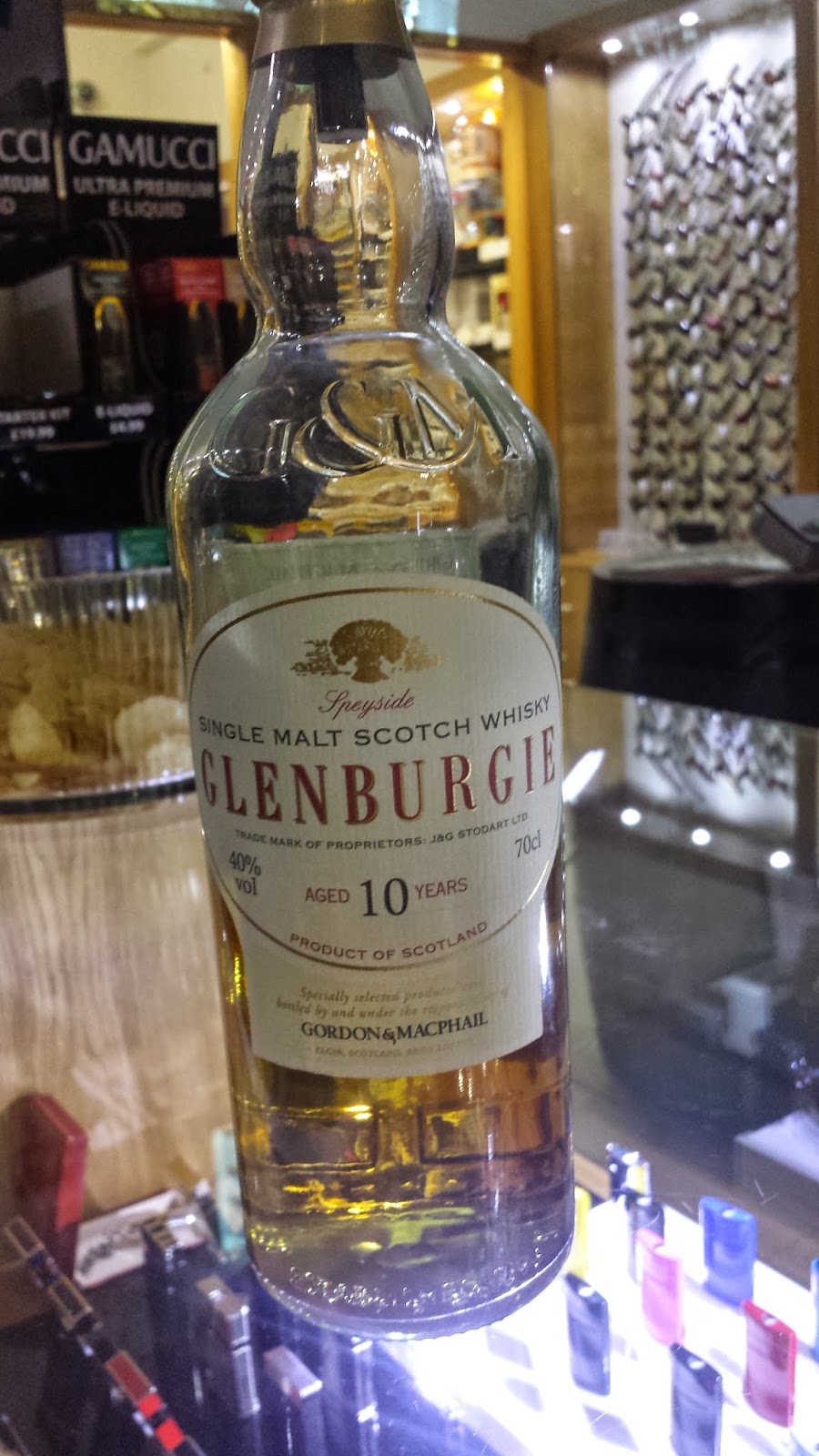 This particular bottling, on G&M's Distillery Label range was matured for 10 years in refill sherry hogsheads and first fill sherry butts. Quite an impressive maturation for a lesser known blend component spirit.

The nose was buttery, a touch of spice and fruit, thanks to it's maturation in refill sherry casks it also carried a little hint of (the now overused) Christmas cake and a touch of charred oak.

The dram continued to deliver as the palate was surprisingly flavoursome and warming, more ticks in the box for this little whisky so far. Toffee, butterscotch, spices and and berries such as cherry and raspberry were on the cards here with a slightly nutty backdrop. A bit like one of those berry Granola yoghurts. This ended in a very smooth but long finish.

Overall, this went down really well and the best part? The price at £22-£30 RRP! You will find this in Aston's and from online retailers but not in supermarkets.

This unassuming and surprising little whisky makes for a relaxed kicked back mid week sipper or a great alternative to the usual Speyside Suspects in this price category, especially considering the sherry maturation. Belter. 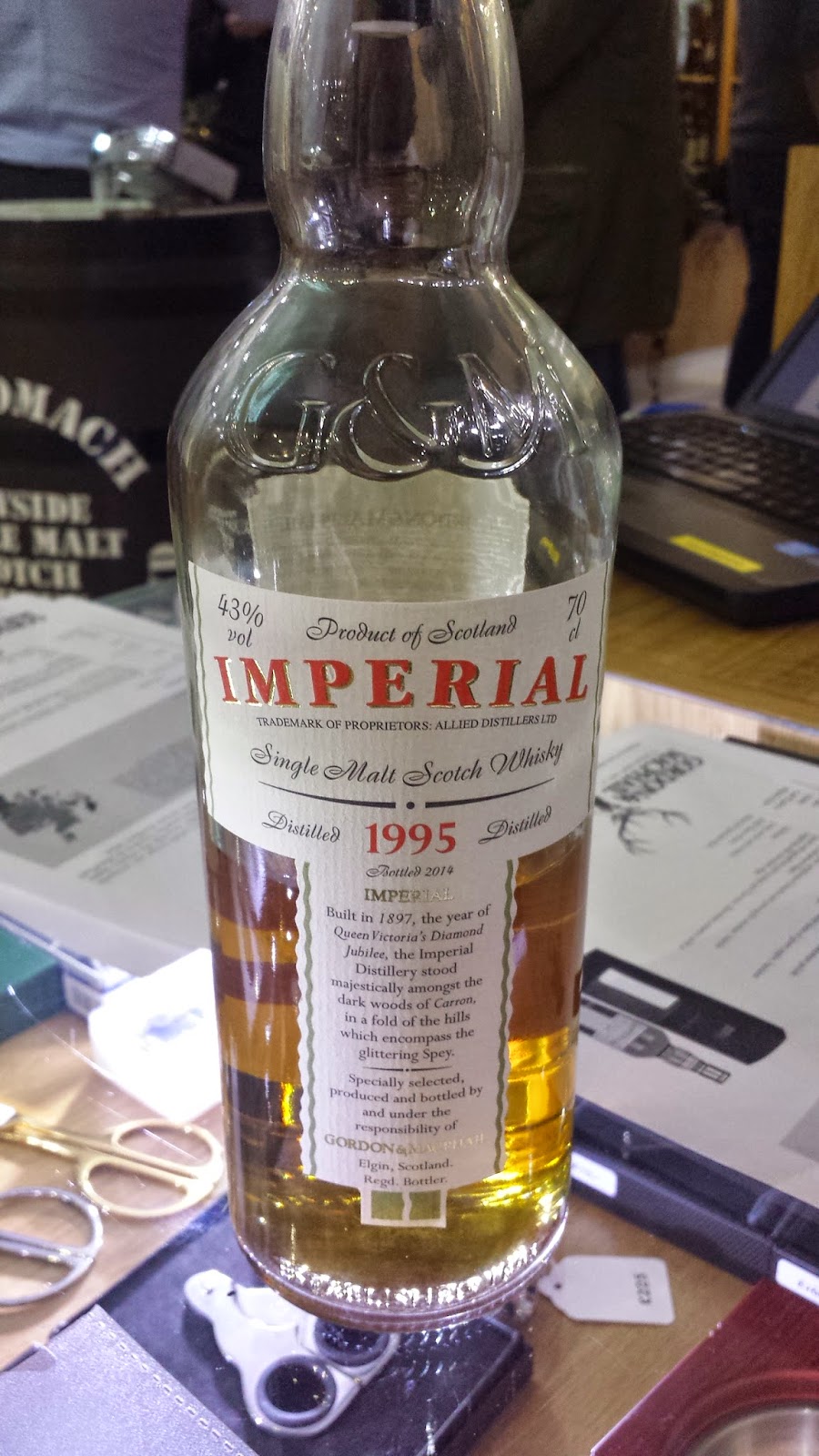 Founder Andy has a bit of a soft spot for this now demolished distillery. Imperial, founded in 1897 was a Speyside distillery providing, what was in most cases, blend component malt for then owners Pernod Ricard's range of blends.

Our second of G&M's Distillery Label range. There has only ever been one official bottling of Imperial by previous owners Allied. This particular bottling is an 18 year old and was matured in refill sherry casks for the full duration.

The nose was spicy with a lot of various fruit. Strawberry jam, raspberry, crunchy green apple and warm pastry, almost apple pie! There's also a bit of cinnamon in there and a heavier dusty/oak note in the background.

On the palate the consistency was good, again more of that strawberry jam but this time with crunchy nut cornflakes, vanilla custard and a little bit of milk chocolate.

This bottle retails at around £55+ and again can be found both in Aston's and online. For an 18 year old whisky from a now closed distillery, sherry matured and in what all honesty is a very nice dram, who could argue with that?

Comparable to many other 18 yr old whiskies in this price range if not better and makes a change from the usual brands! 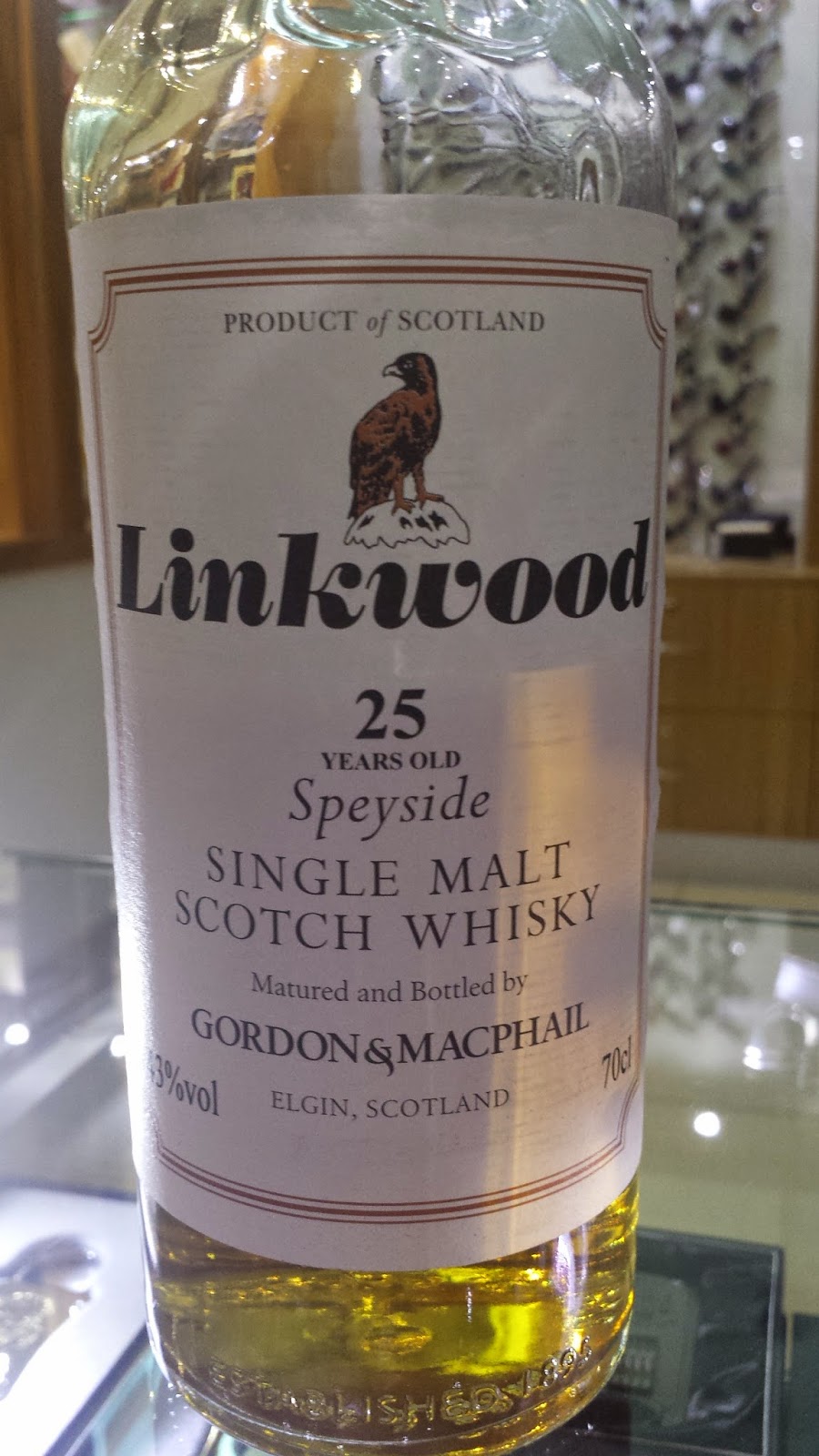 Next up Mike pulled out the stops by revealing a bottle of 25 year old Linkwood.on G&M's own label. Our third Speysider of the night, Linkwood which is situated near Elgin, G&M's spiritual home, is currently under Diageo's tenure.

Linkwood is another distillery whose majoriy of whisky is destined for blends of the owning company. There have however been several official bottlings of Linkwood and a fair few independent bottlings knocking about too.

On the nose this proffered cut grass or hay with a herbal quality, like opening up the spice cupboard at home, toffee and plums.

The palate was again, herbal but maybe not as refined as you'd expect a 25 yr old to be. There's also leather, toffee and a slight hint of coffee too, less espresso more flat white. Oak influence throughout. The finish was relatively short but warming before coming back with an almost bitter encore.

Coming in at around £90 for a 25 year old is pretty good value for money as far as recent releases are concerned. Our only gripes were the low Abv and the unexpected bitter tang towards the end.

Linkwood can make some very, very good whisky. This bottling is another Marmite bottle for the club with a split in opinions which is part of what the Whisky Club is all about! 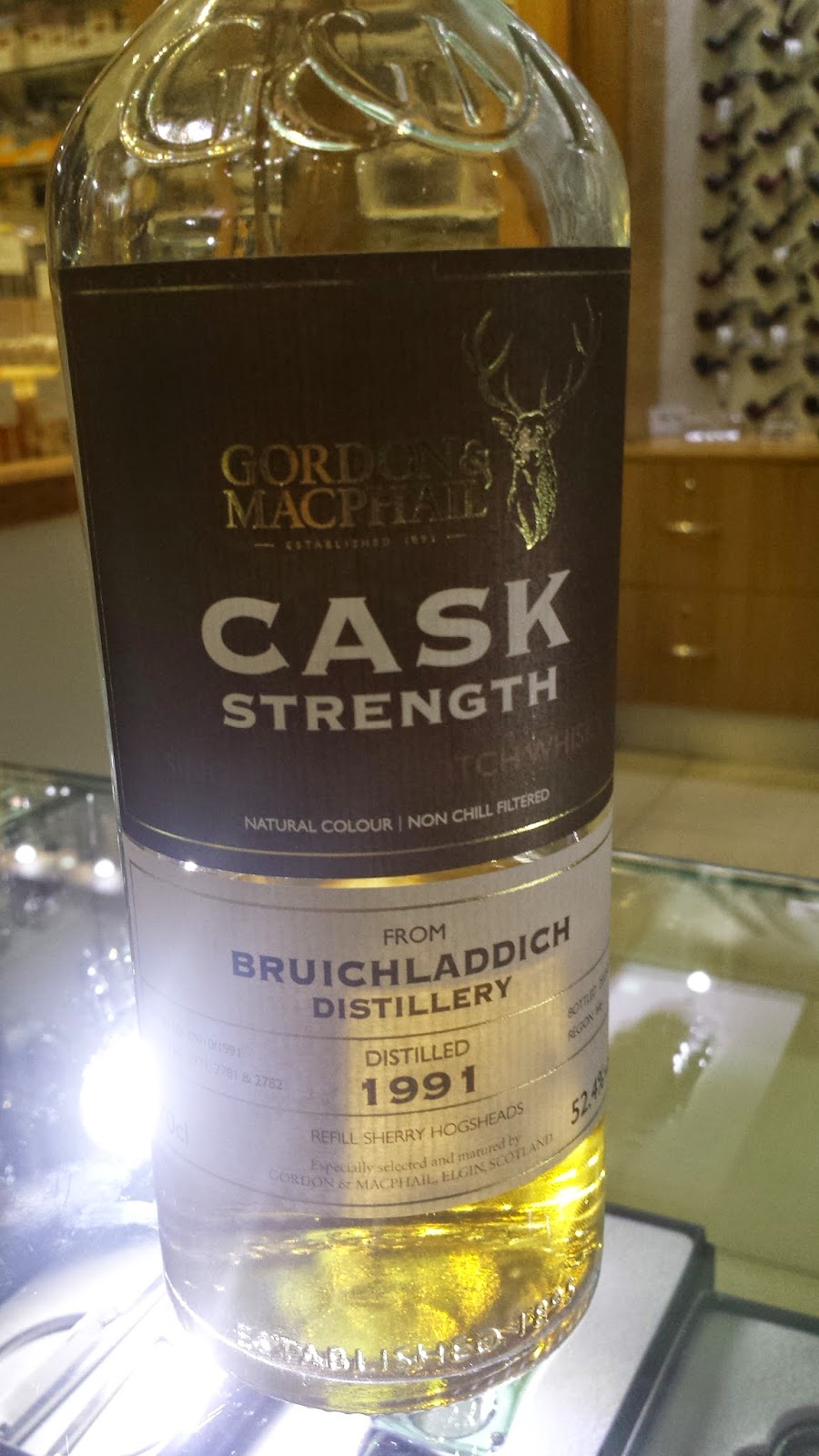 Wowsers Batman, it's a 22 year old cask strength Bruichladdich! If Mike treated us witht eh 25 yr Linkwood then a CS 22 Laddie was up another level. There's no sherry here as this was a bottling of 2 hogsheads combined and bottled in 2014.

G&M do a good line in their Cask Strength range with other bottlings including those from Clynelish, Caol Ila and more. Good company to be in then. This particular wee Laddie was un peated much like the majority of it's brothers and sisters and interestingly was distilled before the distillery's closure in 1994. A real treat then!

The nose had a touch of the maritime Laddie salt but then something surprising. A massive hit of limes and cream, key lime pie and then some! A touch of barley and honey in there too alongside a whiff of the Bruichladdich farmyard notes associated with their peated bottlings!

On the palate the dram changed slightly, whilst it did carry a tart citrus, it then developed into a maltier dram with a mineral tang like licking a pebble on a beach. Crisp barley and Icing sugar led into a long and relatively sharp tart finish.

Carrying an RRP of around £100+, this is some competitive pricing from G&M for a Bruichladdich at this age especially at this strength.


Ah Highland Park, we've had a fair few expressions from the powerhouse of Orkney at the club in our 2 years of being. This particular bottle was one of the lowest age drams of the evening, matured in a refill hogshead and bottled at 43% what did this dram have in store. 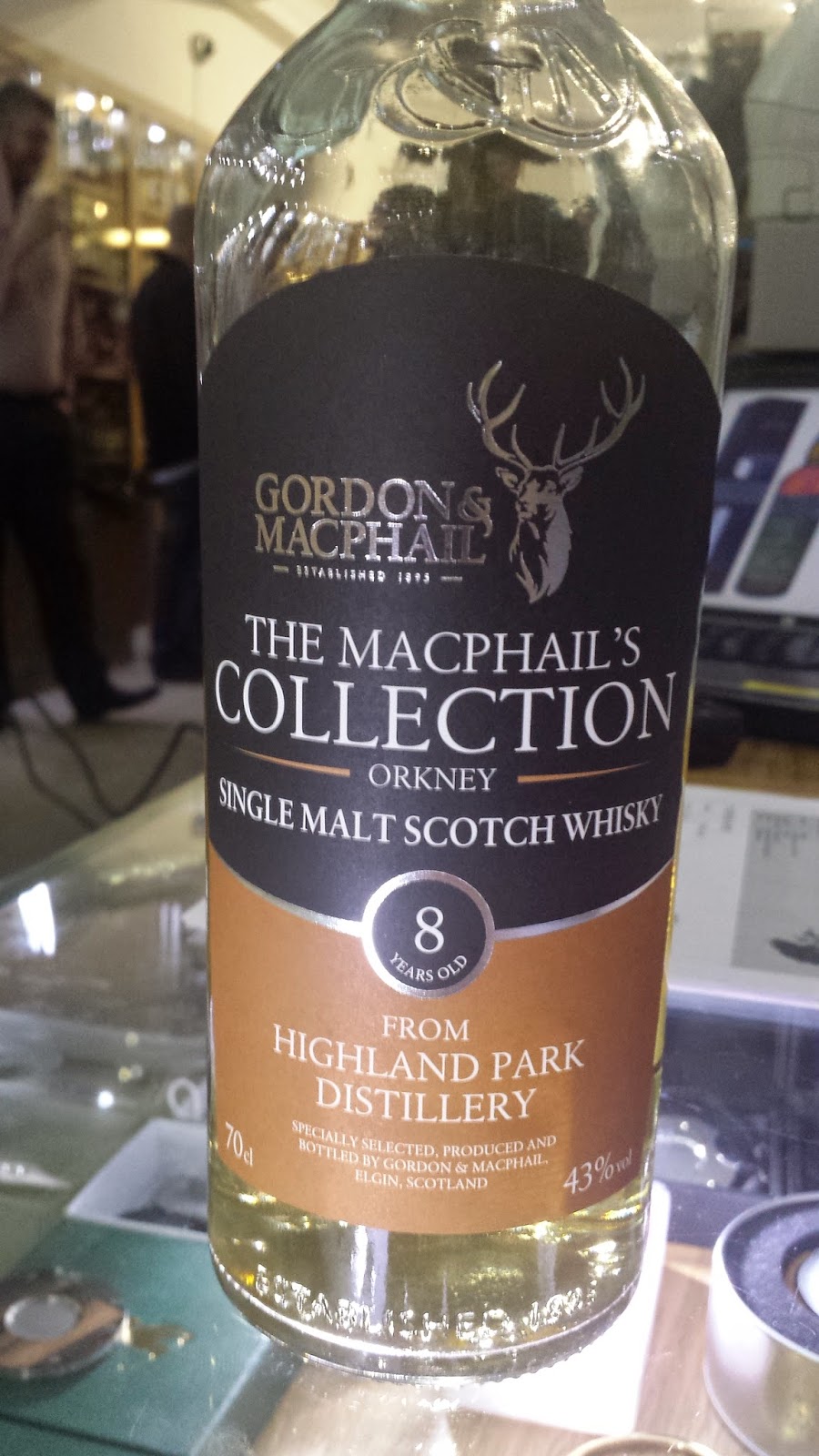 Spritely and fresh on the nose whilst having whiffs of the Highland Park house style peat flutter in and out. Raisin, toast, apple and marmalade were all here with a slight creamy note alongside.

On the palate it was initially a dry ashy delivery however this is quickly cast aside by the fruitier notes in the young spirit. Lemon, toffee, apple sauce and lemon meringue pie come in quickly followed by a very nice warming coal fire smoke and peat. There was a touch of dried herb here too, oregano perhaps? Considering the 43% abv the smoke had plenty of legs to it.

The finish is of medium length with the peat playing centre stage slowly tailing off into a savoury ash and herbal note.


Overall, at around £30RRP this is an absolute bargain. This whisky belies its age in terms of subtle complexity, despite only being 8 years old I would happily (and did) purchase this and think it more than stands up to some of the official Highland Park bottlings, particularly the more recent NAS releases. 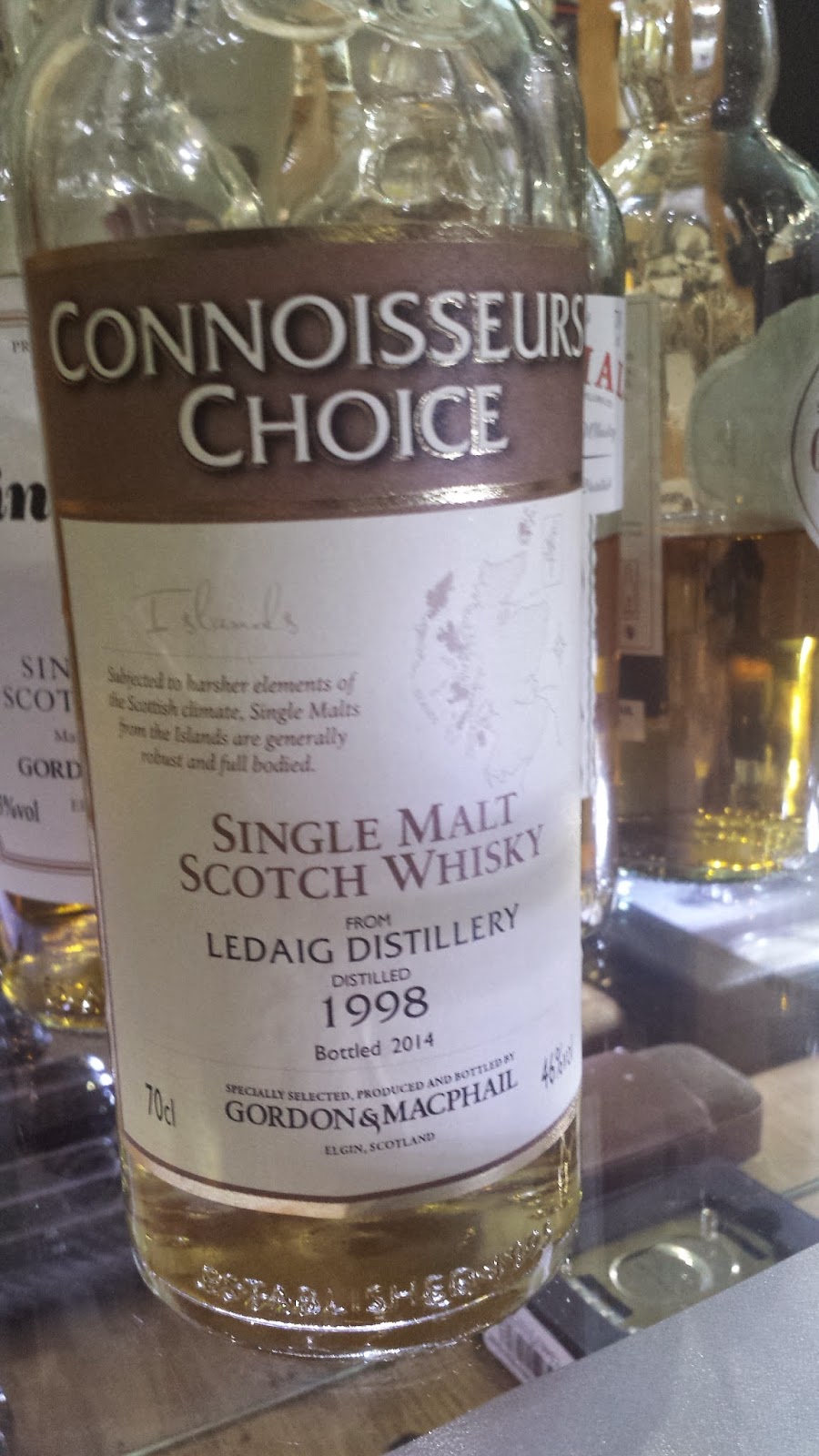 G&M's Connoisseur's Choice range is well known across the globe. This is their flagship bottling range with the highest number of releases and bottles overall compare to their other ranges. From 2012 all CC bottles were Non chill filtered, Natural colour and bottled at the increased strength of 46% compared to the original 43%.

This Ledaig hails from the Island of Mull and the Tobermory distillery. Ledais is another style of spirit and brand distilled at the same distillery akin to others such as Bruichladdich (Port Charlotte). Ledaig is like Tobermory's peaty cousin and can be hard to find at the higher age levels such as this 15 year old.

The nose carried dried wood, rubber tyres, a touch of lemon but remained quite dusty and dry. Towards the tail comes seawater/salt and seaweed.

The palate initially proffered a drying smoke alongside brine and damp earthy notes, before opening up to show a touch of honey and even a bit of lemon rind in there too.

The finish carried on from the palate with a short but drying end.

An interesting dram indeed, peat often compliments Island whisky styles with their 'maritime' notes. This retails at around £42 RRP.


Our final dram of the night saw us take on another Connoisseur's Choice bottling. This time a 2001 Caol Ila from one of Islays most famous and popular distilleries. 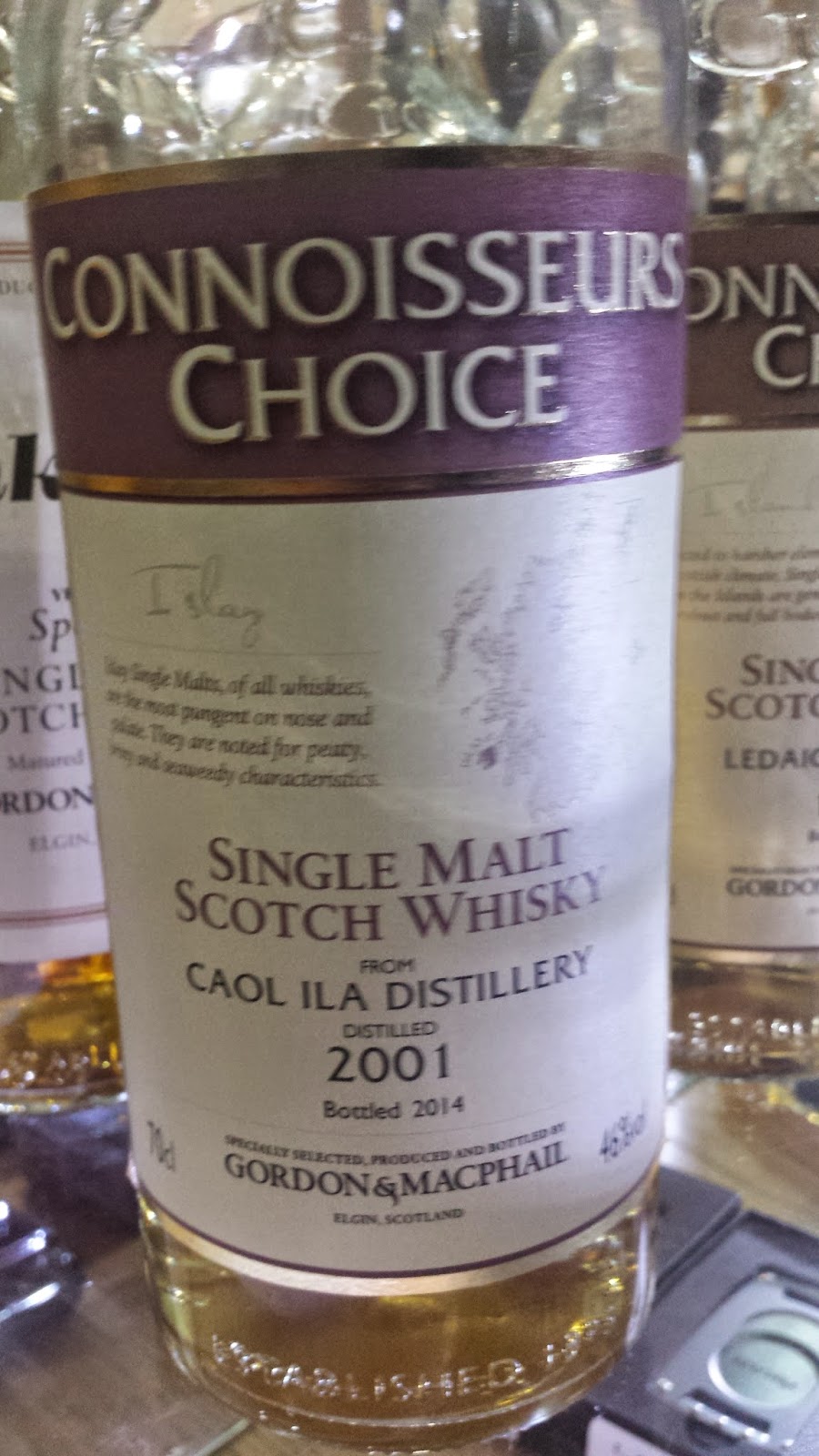 The nose carried some of those crucial Caol Ila notes with waxy lemon and a lot of their trademark peat. With this though there's vanilla, a touch of basil and leather. Yum

A good oily consistency again got this off to a good start on the palate. Again the smoke at the fore but leading into pepper, more lemon, digestive biscuit and brandy snaps. More smoke towards the end.

this led into a very satisfying lengthy warm finish with the peat guiding to the finale.

This was a great dram to finish on and can easily compete if not overtake some of the standard Caol Ila core range from the distillery in this price range. This carries and RRP of around £50.

A fantastic line up with great input and presentation from Mike of G&M. Aston's put on a great night for us and we've had feedback from everyone who attended who said it was a resounding success.

But wait? What about this "Mystery Dram" that we tried when we arrived... Well Mike put us all out of our misery and revealed what was in the (sneakily decanted) bottle...

It was the English Whisky Co's Chapter 13 from Norfolk in England!

Our second expression from these guys and this not only came as something of a surprise to everyone but made a lot of us appreciate how good this stuff has gotten in the last few years since we tried their also tasty Chapter 9!

Looks like the St George distillery remains one of those in England to keep your eye on.

In fact it went down that well that a few people bought a bottle!


Once again the whole club extends our thanks and gratitude to both the excellent and attentive Aston's and Mike of G&M for putting on a fantastic night. Astons can be found in the Barton arcade of St Annes Square and not only proffer a very very good selection of both Distillery and Independent malts, but also stock other great spirits too in addition to their vast range of cigars, tobacco and accessories!