Whiskyology: The Science of Whisky Tasting

After another highly enjoyable Christmas party for the members, during which we brought back all of the unfinished bottles from 2018 and had a decent go at putting that right, we had to wait until the last day of January for the club's first tasting of 2019.


The first looked light and tasted "a bit creamy" according to some early tasting notes. While the second appeared to be a totally different proposition. A much darker colour, as if it had been sherried or, as someone suggested, "it's certainly been in something" and was a lot sweeter than the earlier dram.

Adam revealed that they were both the same whisky, more or less. An 11yo Dalmore from the Scotch Malt Whisky Society, called Chocolate Melting in the Greenhouse, Adam gave us the first with water already added, diluting the strength down to 43%.

The second had a drop of caramel for colour and was also 43%. Despite their shared origin they certainly seemed to taste very different, underlining Adam's point about the visual effect making such a difference.

As a bonus whisky we then had a drop of another similar dram, so similar in fact it was bottled from the same distillery on the very same day. Also from the SMWS, it was Gardener Takes a Break. This was much stronger tasting, again sweet and spicy, and certainly packing all of its 60%.

Next came something completely different. Or rather two things, as we had a pair of drinks from one of the few distilleries in the world known to produce both beer and whisky from the same brew.

This producer in question is in Belgium, probably nobody's idea of a whisky heartland, but we're all about exploring new things at Manchester Whisky Club. The drinks came from the Het Anker brewery in Mechelen, under the Gouden Carolus brand.

On tasting them both, you wouldn't have them pegged as being from the same source. The whisky had a bit of a punch on the nose but was at 46% was quite mellow when compared with the beer, which was 8.5% but didn't really taste it. Instead, it was dark, juicy and highly drinkable.

If we were going to have one of these again it would probably be the beer to be honest.

After a half-time break it was time to return to Scotland and some highly peated whiskies. The next drink was one of the Big Peat blends produced by Douglas Laing, marrying together various whiskies from Islay. This particular bottling was the 2017 Christmas edition, an 'all-Islay' edition featuring at least a bit from each distillery on the island, including the long-shut-but-soon-to-restart-production Port Ellen.

About half of the whisky was Ardbeg, and more or less everyone loved it: "spicy" and "gorgeous". With Islay going through an expansion, and other new distilleries joining Port Ellen, there'll be plenty more peated whisky where this came from in the future.

If there's one distillery most associated with the peaty taste of Islay, it's Laphroaig. The classic 10yo, traditionally considered a bit of a love-it-or-hate-it dram, is usually likened to TCP. But for Adam it brings back linseed oil, putting him in mind of his grandad who used to enjoy a drop: the taste of a particularly whisky can vary for each of us, depending on times and places we associate with it. 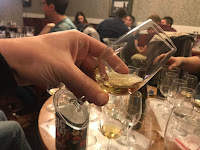 The Laphroaig we were enjoying here was the 2017 Cardeas quarter cask, one of an annual series of releases the distillery does under that name. We very much liked this too, although so did plenty of other people as you'll be lucky to find a bottle anywhere online for less than £180.

The evening ended with something out of the ordinary: a little bit of homebrewing, or at least home spiking. This involved taking Aldi's standard Islay single malt, apparently a perfectly reasonable 7yo Caol Ila, with phenols.

This is a chemistry thing that has something to do with making something taste peaty, although by this stage of the evening my notes were becoming even less extensive than usual. In fact, beside this drink I've only written: "wheeeee!" so I'm afraid what it actually tasted like may well be lost to history.

There was just time for some dram of the night voting, and the winner was the bonus dram from SMWS, Gardener Takes a Break.

Huge thanks to Adam for such an expertly-led evening full of information and fun, which I've only just scratched the surface of here. There's much more on Adam and Kate's blog. Thanks also to everyone who attended plus the Briton's Protection for hosting us once again.