In Vino Veritas... Or Is There?

At the end of an unseasonal week of warm February weather, we had an unusual line-up of drinks on arriving for the latest Manchester Whisky Club tasting. In fact, there wasn't any whisky in our glasses at all, at least not until half-time.

Long-time club member Nick, who works for Reserve Wines, had laid on a two-part tasting for us. To begin with, five wines. And then, whiskies finished in casks that previously held those wines, or at least very similar ones (if we'd found bottles of the actual wines to drink the club membership would probably be paying it off all year).

We tried all the wines blind allowing Nick to do a bit of a dual reveal once we were knocking into the whiskies. But we tasted the whiskies in a different order from the wines (that is, whisky number one didn't match the opening wine, and so on). So for the purposes of this blog I'll write about each pair of drinks in whisky order.

The first whisky was noticeably dark in colour and had a bit of dark chocolate or chocolate orange about it. It turned out to be 16yo Linkwood from the Gordon and Macphail Private Collection that spent 23 months in Cote Rotie wine casks. We bought back in 2016 for about £60 (good luck finding it for anything like that, or even finding it all, today).

Nick's chosen closely matching wine was in fact the third one we tried earlier in the evening. It was a bit plummy, very dry on the palate, with an intense acidity about it, almost like Vimto. It was £13 and is a Syrah from Chile's Tabali vineyard.

The second whisky had a big taste about it, and it was no surprise really when Nick revealed we were drinking an 11yo from the English Whisky Company, aged in totality in Portuguese Cabernet Sauvignon casks. We liked this, although overall the room seemed to slightly favour number one. This is the oldest release from the EWC so far, and is available under their The English branding, at 46% and £55.

The wine was an Argentinian Cabernet Sauvignon that we'd tried fourth. It was a bit more challenging than the earlier wines we'd had, with a certain spiciness and a lot more oak. A heavy and full-bodied drink, it's from the Felino company in the wine-making province of Mendoza.

Next we were in Speyside for a Benromach, finished in Sassicaia (my notes, getting increasingly hazy by this point, have this written as 'sassy-something' which I suppose is a fair enough effort). It's an 8yo aged for the last two years in the wine casks, available for a decent £45.

The wine was a bit of a curveball as it was not exactly the same, Sassicaia being a bit on the pricey side to say the very least. Instead, we had a Beyra Vinhos de Altitude wine from Portugal, featuring two or three different grapes. This was the freshest of the three reds we had and, Nick assured us, was a decent impersonation of Sassicaia at a much more affordable price.

The fourth whisky we drank smelt very strong indeed. Given that this is often the point of a tasting when we hit the cask strength stuff this wasn't exactly unexpected, but even by those standards this had a really powerful nose. It tasted strong too. The good news about the whisky is that it's just £50, the bad is that you have to go to the Glen Moray distillery to actually get some. It's one of their bottle-your-own efforts, a 12yo with full maturation in Chardonnay.

The matching wine was number one, a Chardonnay from the Felino vineyard in Argentina's famous wine region of Mendoza province. It had a certain citrussy sweetness - think pineapples and limes - with some more acidic notes and a bit of oak. 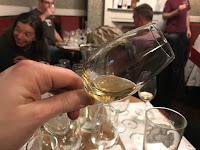 By the tenth drink of the night, which was what we had reached by this stage, the only tasting note I managed to note down was: "Are we still going? This is almost certainly incredible". Photographic evidence indicates it was a Kilchoman with a Sauternes cask finish, and it had plenty of peat about it, naturally enough.

The Sauternes we'd had earlier in the evening, wine number five, absolutely split opinion. A dessert wine, some loved it and some didn't. It certainly had plenty of honey about it, a sort of buttery sweetness. It was a 2010 Chateau Jany.

After certainly the most international tasting we've ever run, all of the whiskies got at least some votes in the dram of the night contest. But it was the fill-your-own cask strength monster from Glen Moray, number four, which came out on top. And the winning wine was the Sauternes! But then I suppose that's what happens when you operate a first past the post voting policy.

All our thanks go to Nick for laying on a fabulous tasting, to all club members for putting in another excellent turnout and to everyone at the Britons for hosting us once again.