Martin shared the fruits of his recent labours with us at April's Manchester Whisky Club tasting, with a specially curated selection of weird and wonderful whiskies that have come his way over the past months and even years.

It was a blind tasting so the only clues we had were the rough size of the bottles in their black bags, although Martin did at least do a reveal after each drink so we didn't have long to wait to find out just how wrong we were about what we thought we were tasting.

We started off with something that had a very distinctive smell, which got us all thinking it was much more weird than wonderful. On the nose it was somewhere between a carpet shop and a fish market, so maybe the Grimsby branch of Carpetright. To be honest, we all hated the smell. It tasted a little better, almost a bit like a health tonic or herbal liqueur rather than a whisky though.

Another comment from the group was that it definitely wasn't Scottish and, right enough, it turned out to be from a little further north. Iceland's Floki distillery, which only uses local ingredients. But the most unusual factor is the actual local ingredient they use to give it a bit of smoke: sheep dung, of which there is plenty to go around on the island. This particular bottle was a young malt spirit rather than a whisky as it wasn't old enough at that time. It's 47% and cost £65.

The nose on the second whisky was much more up our street. It was Christmassy and fruity and, as someone said, "I've got lots of apples going up my nose". When we tasted it there was a definite sweetness about it, too, and we generally thought it might be a little younger than the 10 years it turned out to be. Overall, almost unanimously popular.

It was in fact another bottle from Mackmyra, the Swedish distillery who treated us to a full evening's tasting last month. The unusual element here was courtesy of barrels which had been seasoned with tokaj, the Hungarian sweet wine. This particular bottling is 48.6% and was produced a few years ago under the Moment Vintage range, but good luck finding one on the market now.

The nose on whisky number three gave it away a bit as hailing from Islay, at least somewhere along the line. The familiar smell of TCP and Germolene, suggested one of the island's peatier distilleries was involved. The distinctive dark colour also got us talking, especially when we learned there was nothing artificial going on. Strong tasting and very smoky, it really strips away at the back of the mouth, putting some club members in mind of the peatiest Octomores around.

Although the spirit here may have come from Islay, the whisky was created in the US by craft distillery Lost Spirits. Their thing is to dabble in the weird science of whisky, and this particular bottling, Abomination Chapter 2: Sayers of the Law (sounds like a decent movie tbqh), was a result of a forced process of 'hyper ageing' lasting just a few weeks or even days, with young 13-month old spirit acquired from Islay at the heart of it. At 54% and just £50, this really was great value too.

The last whisky before half-time was something different again, and it had an unusual reddish type colour. In fact, it looked a bit like flat Coke or sherry. The taste put us in mind of those Eastern European herbal liqueurs again, although having grown up in the north of Scotland it also reminded me of red kola, which a cursory survey of club members confirmed was not a drink which enjoyed a wide-ranging popularity.

What we were drinking was a blend from Bell's. Not the most auspicious drink you would have thought, but this particular bottling, Red Devil, was infused with chilis. An attempt by Bell's to appeal to a younger market in the early 1990s, it didn't last long on the shelves, but has since become highly collectible among Manchester United fans. Certainly very drinkable, with more of the taste of chili rather than the heat, it's 40%, but again, you'll have to hunt the whisky auction sites if you want to get hold of one. 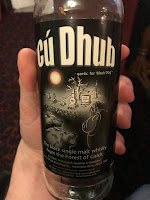 After a short opportunity to refresh our pint glasses at the bar of the Briton's Protection, we were back for dram five and another unusual colour. This was not just dark, but virtually black like tea or Coke again. It was a little bit corked too, but that true back-of-the-booze-cupboard feeling. It wasn't as big on the nose as we thought, and to be honest, didn't do all that much for us in the tasting either, all caramel and liqourice.

The blackness was deliberate, in that we were drinking Cu Dhub, an attempt to recreate the 'black whisky' of yesteryear, which was popular at various points in history but often regarded as not being terribly good. This latest attempt involved caramelising the spirit in Denmark, and after it was discontinued its popularity in Denmark meant that most of the remaining bottles have ended up there. Not one to seek out other than for curiosity's sake. 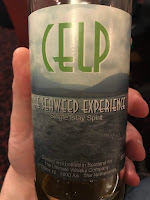 We went from black to green next, dram number six having a distinctive greenish tinge to it. Sweet, lovely and spicy, this really packed a distinctive punch. "Almost like a breakfast Islay" as someone put it.

As it turned out, we weren't drinking whisky at all, at least not by the standards of the Scotch Whisky Association. We were enjoying some Celp Seaweed Experience, created by literally adding some actual seaweed to bottles of a young Laphroaig. It's created by the Dutch firm, the Ultimately Whisky Company, and we very much enjoyed this. It's 55% but again it's an auction listings job if you want to get a bottle for yourself. 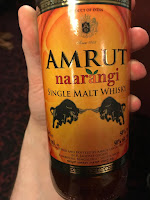 We went from the seaside to the schoolroom next. Or at least the school workshops where you did woodwork, the nose being quite reminiscent of, well, freshly cut wood, or maybe a pine forest. When we got to taste it, there was an immediate creaminess, almost like ice cream in fact, or a can of cream soda.

Old club favourites Amrut, the Indian distillery, was the source of this particular bottle, called Naarangi. It has been matured in a particularly distinctive way, with the casks initially filled with sherry, wine and orange peels, before being swapped out for the Amrut malt to finish. It's definitely citrussy, and doesn't taste as strong as the 50% on the label. At £95 it's possibly a bit steep, though.

It was a good job we were on slightly reduced measures this month, to save all our Friday mornings, as we rolled on to an almost-unprecedented eights and final dram of the night. This got us thinking of both chocolate and sweaty socks at the same time, or possibly even wet cardboard (perhaps this is what happens when you try to do an Easter egg hunt in the back garden in the rain). As is traditional the notes I've made at this point are relatively brief, but they do record that the membership had "mixed views" on this.

It was the Double Chocolate Bourbon from Prichard's of Tennessee. It's so named because it combines the distillery's signature Double Barrel Bourbon, itself created by manually re-barreling during the maturation process, with actual chocolate. It's mellow rather than sweet, and is 45%. Not bad but not our favourite of the night.

And for once our dram of the night voting ended in a tie. The Mackmyra and the Lost Spirits Abomination were joint first, with both the Celp and the Amrut getting support too. After a tie-breaker with everyone forced to choose between the top two on pain of death, the Mackmyra came out on top.

Thanks must go to Martin for collating these extremely interesting whiskies for us all to share, to the club members for another successful tasting, and everyone at the Briton's for hosting us once again.