April was a very special month for the club that saw us meet for the 4th time for this was the night that we held our first 'Old & Rare' night showcasing a selection of rarer and more.. unsual bottlings.

We welcomed 2 of our newest members into our midst on this evening which was a nice addition to the night.

First up was the Glen keith 16yo bottled by indy bottler Gordon MacPhail. Glen Keith is in ownership of Chivas bros of Regal fame. The Speyside distillery is currently mothballed and has been since 1999. 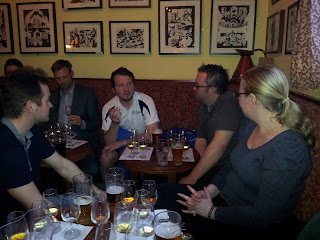 Andy's Tasting notes were:.
Nose: Slight creaminess, malt,  hazelnuts and dried cranberries, all spice, oak and lemon sherbet.
Palate: An instant tang similar to a sour green apple, sugared pastry, nutmeg and cream again. Quite a waxy mouth feel.
Finish: Relatively long with lots of the aforementioned cream that seems to have covered my tongue! Sticking plasters, quite a dry tail.

Next up, another Speysider 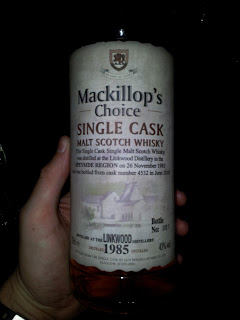 Mackillop's aren't a bottler that you would normally associate with independent whisky releases however they apparently take a vintner's approach to hand selecting the casks they bottle. In this case a 24 year old from Speyside distillery linkwood. Adding to the rare factor, turns out we'd purchased bottle 001!

Nose: Oodles of caramel, boiled sweets, straberry jam, black pepper and citrus fruits
Palate: Initially more black pepper, then moves on to grapefruit, caramel, a slight hint of cocoa powder and vanilla.
Finish: Quite short but during the brief foray there are more citrus fruits that are well balanced alongside a touch of oak and custard keeping them in check.

I can see how this might have been selected in a very wine-like manner especially with the degree of complexity and delicate citrus aromas. 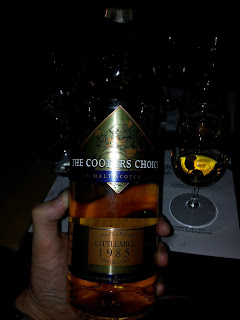 Next up is our first bottling from a now defunct distillery. In this case the late Lowland distillery Littlemill. Littlemill was demolished in 1994 after having a bit of a turbulent history including a fire in 1989. Littlemill took its water from above the highland line despite it being a Lowland whisky. The stocks of Littlemill are yet to run dry so there should be plenty more independent bottlings coming up over the next few years.

Nose: Peppermint tea, vanilla, almond paste, then fresh candy floss with a delicate vanilla and floral note.
Palate: Sharp at first with green fruit and a very new make spirit element despite its 27 years. Sprightly if you will. Then mellows out after time in the mouth to baked apple and cinnamon bread, banana, and toasted granary bread.
Finish: The finish is of medium length but initially quite bitter. However, there are then spiced orange and mulled wine notes with charred oak and caramel that round off a lovely experience.

Ok.. now this is where it all gets a bit interesting/hazy. Fellow club member David (who I've since removed from my Christmas card list) brought us a very rare bottle of Chinese Baijiu to try. This particular bottle is rather rare as David says that you can only get hold of this in China and you must be involved in some way with the Chinese Government or teaching....

To give you an idea of what this stuff was like I've included a snippet of my original tasting notes from that night below: 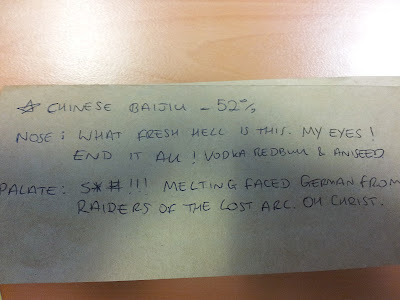 Nose: Inexplicably like a vodka & redbull with an intense sour sweetness
Palate: Grim
Finish: No finish of sorts but felt several teeth melting
And the face of evil who supplied this spirit of unquestionable quality:

﻿﻿After tasting this Baijiu I'm not sure if that bodes well for the future of Chinese global relations or whether this is a testament to the hardship of being part of the Chinese education system.. If you come across this stuff on your travels, then we at The Manchester Whisky Club wish you good luck. 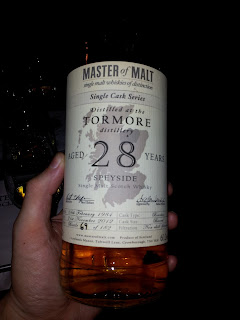 With everyone now back to normal after reeling from the experience that was the Baijiu we returned to normality. Thankfully this came in the shape of a bourbon matured 28yr old Tormore that was literally a sight for sore eyes. Tormore is one of the lesser well known Speysiders with a majority of its malt contributing to blends including the well loved Ballantine's range.

Nose: Dried herbs, mint leaves, bourbon vanilla extract, thyme and aromatic warmed fruits including brandied pears.
Palate: More fruit from the nose with an immediate transition to a more woodied tang that leaves you with a warm feeling inside, think reading Sherlock Holmes infront of an open fire on a trsuty old leather wingback chair with rain pattering on the windows. Ahem, anyway, back to reality now
with notes of heavy vanilla and blackcurrant fruit pastille alongside a deft touch of plumb crumble.
Finish: Long and silky, notes of Eton Mess and some festive spices. Delicious

This Tormore was a delight to behold. Get one quick before it's too late at an irresistable £99.95 from www.masterofmalt.com

We finished off the tasting with a rather special independent Talisker release. This is part of Gordon & MacPhail's 'Secret Still' range where they bottle whiskies from various distilleries without hinting at their origin. However since there is only 1 active distillery on the Isle of Skye, this 'Skye' release oalso known as 1.2 could mean only one thing! 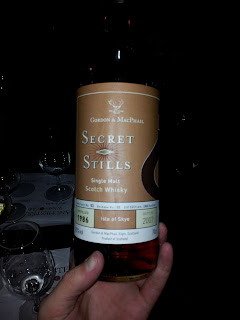 Nose: Sweet and rich nose with a more refined background to Talisker's standard offerings. Tinned peaches, honeycombe ice cream and masses of sherry character and barley. In the midst of these wonderful notes comes the trademark peat and almost savoury like smoke.
Palate: The sherry from the nose reins supreme here alongside charred wood like that from a fire bucket in summer, a fresh and cleansing sea salt note comes through followed by salted caramel.
Finish: The smoke slowly fades with more toffee and apricot preserve ending in a well rounded delicate wooded note.


Overall a lovely whisky and a fantastic showing of what this Diageo distillery can be capable of. The mouthfeel was surprisingly thin but this still offered a lot of depth and flavour.

In some cases I think some of the line up went to show that just becasue a whisky is older or more expensive then it doesn't necessarily make it taste better than a younger or cheaper bottling or offer a more well rounded experience. However there were a few corkers with the Tormore and Talisker going down particularly well closely followed by the Littlemill.

Posted by Manchester Whisky Club at 7:46 AM