May 30th saw the MWC meet for the 5th time as a club. On a side note a huge thanks to those that made it down on the night both members and non-members alike!

This was the clubs first tasting actually hosted by a distillery rep so expectations were high. Luckily that rep was Jameson/Pernod Ricard's Stephen Carberry and we weren't disappointed.
Due to a low turnout we opened up to the general public and we had 5 people in one group turn out to sample some of the Emerald Isles' offerings alongside our members.

As we had a mixture of complete whisky newbies and the usual amateurs (we're far from pro's in the MWC!) Stephen started off explaining the differences between Irish and other world whiskies as well as distilling processes and a really useful Whiskey ABC style of presentation. 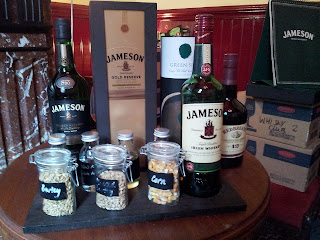 As part of the presentation, Stephen passed round samples of barley to smell and look at and a particular favourite was that he also passed around a sample of new make pot still spirit and new make coffey still spirit.

Onto the tastings themselves, boy did Stephen come prepared!

First off he set up 3 drams, to show the difference between the varying styles of USA Whiskey, Scotch and Irish.

Possibly the most popular Whiskey in the world. Often mistaken as a bourbon but is actually classed as a Tennessee mash Whiskey!

Nose -  Lots of smooth caramel with fresh sugars cutting through. Oak character as well as oil a and nutty element.
Palate- What 'Jack' is famous for, smooth palate with more toffee and charred oak and cream
Finish- An overly sweet finish with the slightest hint of ginger and all spice

Johnnie Walker Black Label 12 - 40%
An immensly popular blended Scotch whisky that adorns many an enthusiasts shelf across the world.

There were mixed reviews of the 3, with a majority choosing the JW Black. While they are what could be classes as 'bog standard' offerings they did succeed in highlighting the unique differences between American, Scotch and Irish whiskies.

Next up we went into a bit more detail on the history of the Jameson Brand and sampled 2 more of their more unique bottlings compared to the standard. 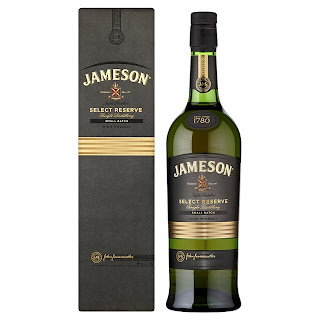 What could be seen as the next step up from the standard expression, the Small Batch is a much more unique Whiskey in the sense that it uses a contributing grain spirit. The grain used to make this spirit is only available 2 weeks per year hence this becoming a very small batch whiskey from a mass capacity distillery!

Nose - Much richer than the standard expression, lovely stewed apple, clementine, cereals and spices
Palate You can tell there is sherry here. Reminiscent of Speyside hints here with Walnuts, ginger snaps, vanilla cream and dates.
Finish- Very warm and long 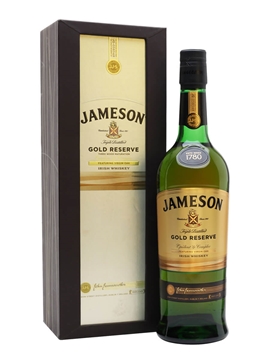 The Gold Reserve has a large amount of pure potstill whiskey and currently heads Jameson's range as their flagship bottling.

Nose - Sugars and so many bourbon-esque notes. Vanilla, elderflower syrup
Palate - Initially delicate and sweet but opens up in the middle to a spicy richness alongside the grain.
Finish - Quite short, signs off with a big thud of vanilla custard
They certainly have taken a very pro- bourbon approach to this one!


There seemed to be a 50/50 split in opinion between the Small Batch and Gold Reserves with some preferring the bolder Select compared to the lighter more delicate bourbon styled Gold. These bottlings offer more than the standard Jameson product and you can really tell the difference in quality and change of style.

Our first single pot still of the night. Green Spot has become very popular in recent years.
Green spot is named after the method of painting spots of different colours onto barrels of whisky to identify them.

It is one of the only remaining bonded Irish whiskeys, and is currently the only brand specifically produced for and sold by an independent wine merchant in Ireland - Mitchell & Son. Only 1200 bottles are produced annually (approx).

Nose - Crisp green apple, spanish heather honey, chopcolate sponge and menthol!
Palate- Cleaner and crisper than you might expect from the nose. Predominantly honey here with lovely balance and mouthfeel.

Finish- A gentle exit with hints of the honey and menthol from the palate alongside cinder toffee.


Onto the final whiskey of the evening. Redbreast 12 is possibly one of if not the most reknowned Irish single pot still whiskies in the world.

This little beauty comes in both the standard 40% and cask strength (57%) expressions. We sampled the 40% on the night.

A nice touch is thast the bottle is actually formed to represent an irish pot still! 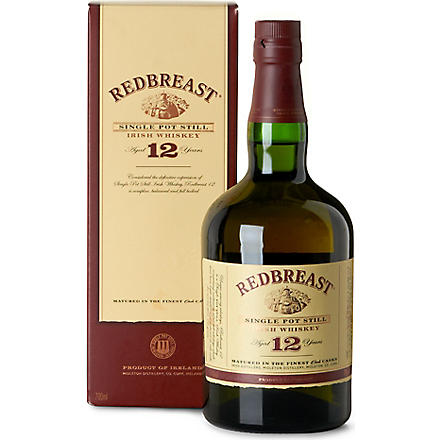 Nose - Very rich compared to an irish blend. There seems to be an oily feel to it even on the nose with citrus fruits, caramel and warm corn on the cob with salt butter.
Palate - The palate is quite deceptive, the delivery is delicate, stroking the tongue with a marzipan/ almond paste quality. the mouthfeel is oily but thinner than you might expect. More citrus now, seville oranges, a slight tickle of sherry and warm cheesecake base
Finish - The light oily texture adds to this whiskey's charm as a wave of cream decends carrying delightful small boats full of ginger crystals and ground hazelnut.

I can safely say Stephen brought along a fantastic array of Whiskies and really highlighted the differences between Irish and other world whiskies that in turn put the spotlight on Irish Whiskey's charm. Pot still character is a phrase that can often be found in whisky blogs and books alike but you can really appreciate what that means here with some of these fine drams.

Overall a fantastic night and many thanks to Stephen for doing a great job in showcasing such a fantastic range.

Check out Stephen on Twitter @CarberryStephen
Posted by Manchester Whisky Club at 11:59 AM