A Trip Down the Spey

Our second tasting in January was based around the Speyside region whilst also taking into account the cashflow issue following the New Year. We lined up 5 bottles that all came in at under £50 each with some usually overlooked bottlers and distilleries for a bit of variety.

So without further ado.. 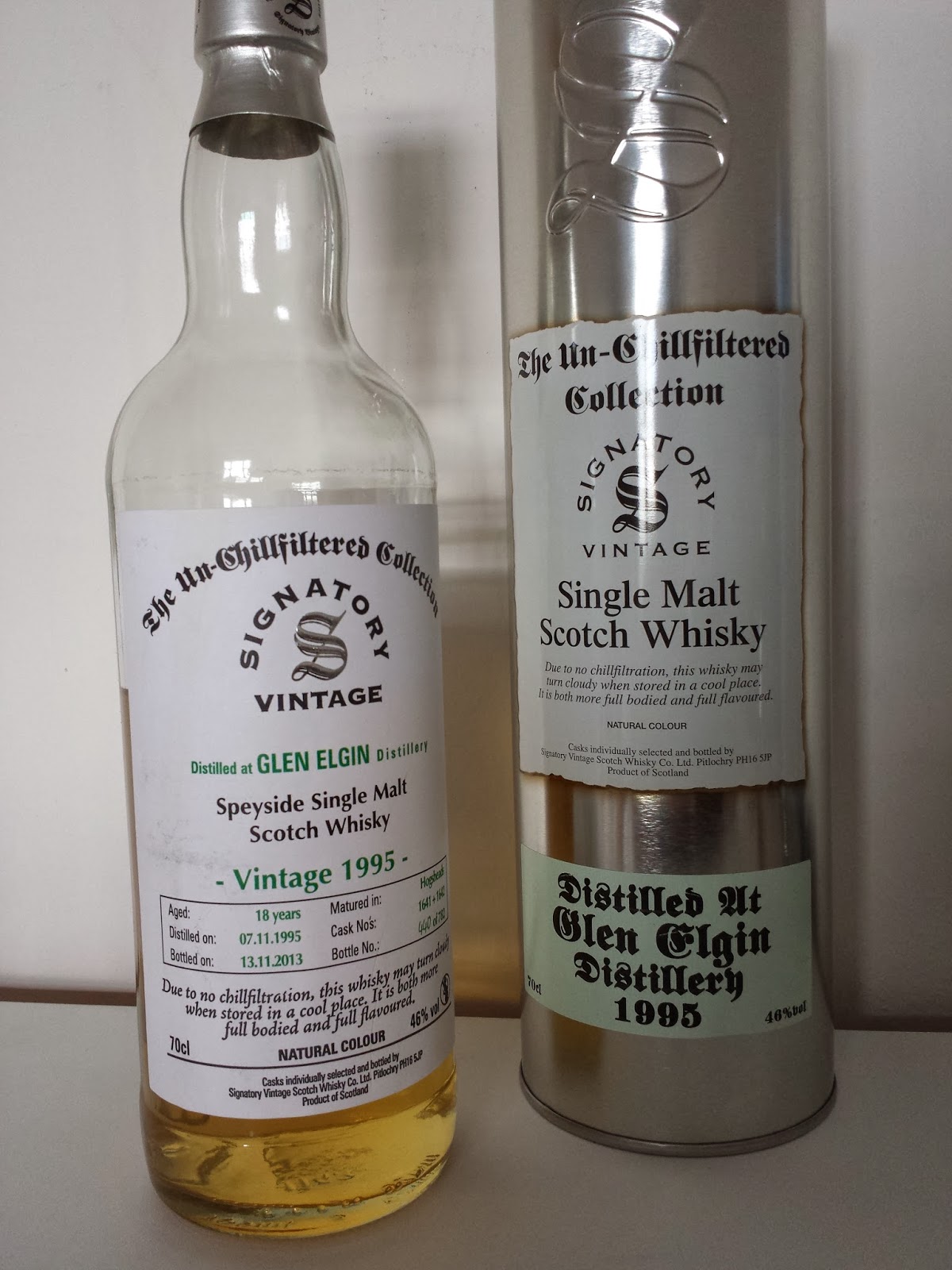 Glen Elgin is rarely found as a single malt bottling. This is one of Diageo's portfolio that has been deemed only worthy of supplying whisky for their blended ranges. Glen Elgin predominantly goes into the famous White Horse range where it plays its part as the backbone of the blend.

There is only 1 official recent bottling of Glen Elgin as a single malt by Diageo, a 12 year old. This particular 18 year old we have was matured for the full 18 years in 2 refill hogshead casks before being bottled in November 2013 by famous indy bottlers - Signatory and is non Chill filtered with no added colour.

The nose is very fresh, fruity and malty with pear and Bird's custard with slight elderflower cordial notes. The palate while very smooth is sweet and syrupy, like tinned peach with slight wood influence and sugared porridge. Simple in its own way but satisfying. A medium length finish again sweet, this time caramel and peanut brittle.

A good solid start and coming in at £45 for a NCF natural colour 18yr old Speysider, you might find it hard to turn this one down and makes a nice change to the usual suspects. 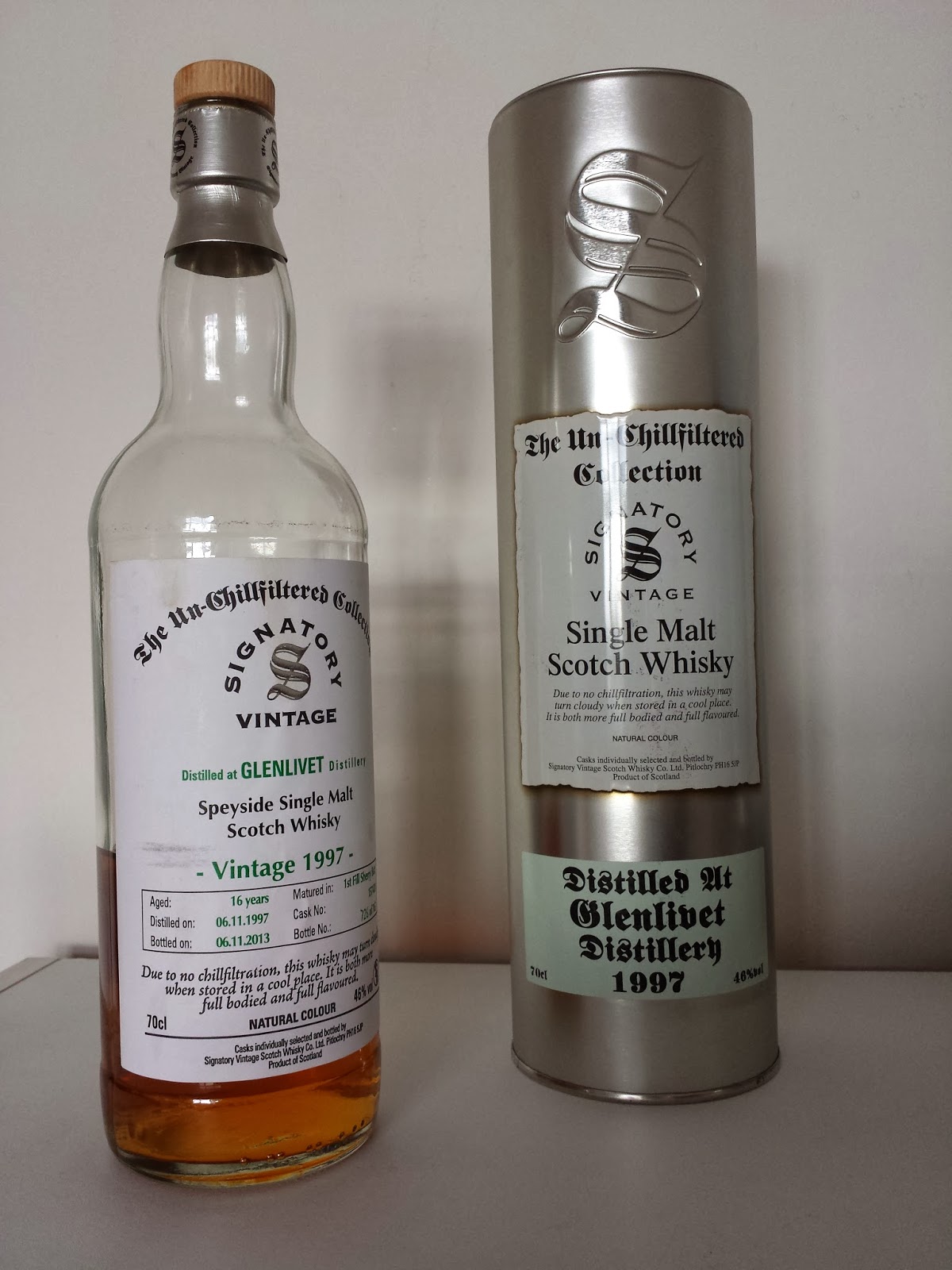 Glenlivet is the second best selling single malt whisky in the world. This is mainly thanks to the US market where it currently stands as the most popular malt.

It is not surprising that Glenlivet hold this title, you can now find the 12 year old in practically every major supermarket in the UK and a swathe of pub chains and bars. Glenlivet are vying for the title of most popular single malt with regional neighbours and current title holders of the most popular malt worldwide, Glenfiddich. Glenlivet are owned by Pernod Ricard who's portfolio also includes other major names such as Aberlour and Longmorn as well as Irish distillers, Midleton.

This particular Glenlivet has been matured for 16 years in a 1st fill Sherry Butt before being bottled in November 2013 by Signatory, our second of the night by this popular bottler. Again this is Non chill filtered and natural colour.

The colour is noticeably darker than the Glen Elgin due to the sherry butt maturation. The nose offers warm toffee and a good sherry balance, not overly rich or too overpowering. There are notes of green apple peel and dried cranberry. The palate was a luscious mix of the balanced sherry character, warm chocolate sponge, banana chips and toblerone. The finish was long and warming and a slowly sweetening baked apple pie note. Delicious, for £47 you can't go wrong with this one. 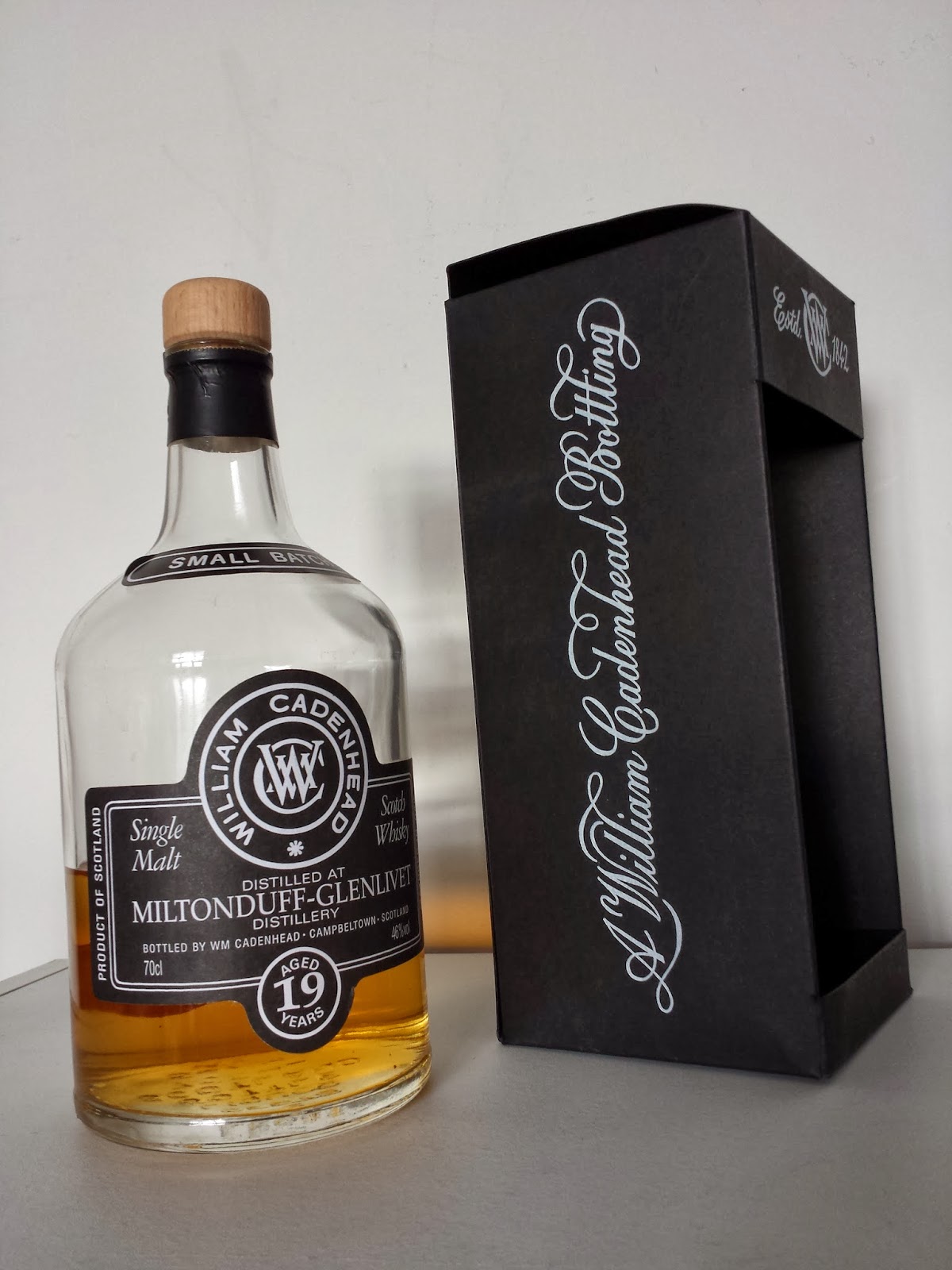 What? Another Glenlivet? Really? This is a bit boring surely? You'd be forgiven for thinking that from the title - Miltonduff-Glenlivet, that we're looking at another of the Glenlivet distillery's range, but no. This is a 19yr old Miltonduff, traditionally there are many distilleries named with Glenlivet in the title, Aberlour again for example is traditionally called Aberlour-Glenlivet as Glenlivet is a catchment area, like a postcode in a sense.

This bottling of the often overlooked Miltonduff was bottled in 2013 by famous indy bottlers Cadenheads for their small batch range, again this is non chill filtered and natural colour. Miltonduff is again a blend focused malt with the majority of production going into Chivas blends such as Ballantine's and rarely seen as a single malt.

This appeared to have been matured in what seems to be a first fill bourbon cask with a rich golden colour.

The nose was fruity, very rich in blackberry, apple and raspberries with a malty underlyer, akin to a blackberry and apple crumble. The palate again was rich, fruity, tropical this time like a tropical fruit juice, almond biscuit and vanilla. The finish is long with more vanilla and lingering fruits. This one went down well and provided good value for £49.95 (the most expensive of the night). 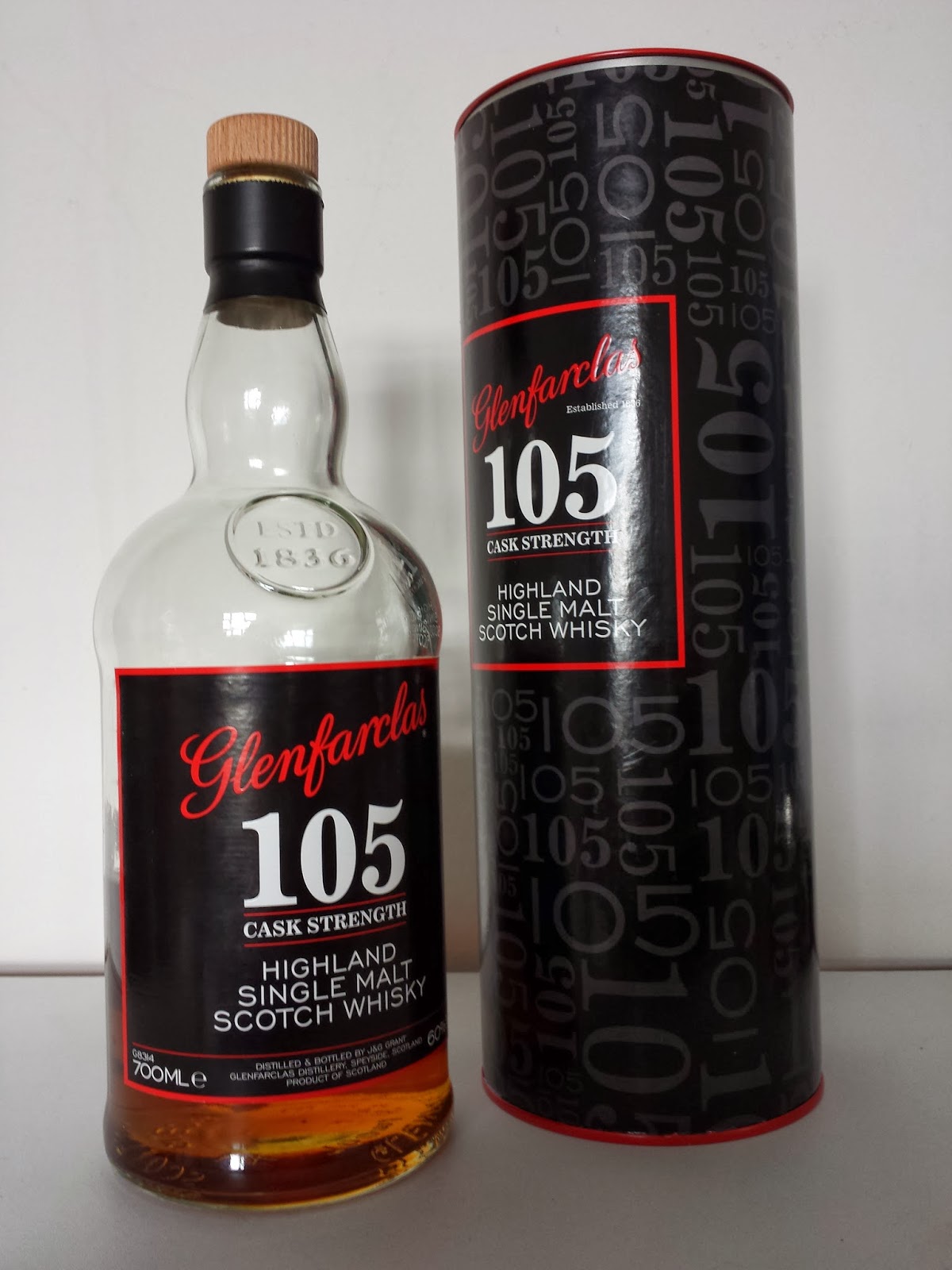 Our first distillery bottling of the night and what better way to kick this off than with a famous, family owned Speyside distiller? We've already tried one Glenfarclas at the Whisky Shop, this however is a different kettle of fish. A 60% 'No Age Statement, or NAS, (although its a 10 yr old) sherry finished whisky famous for its value for money with single malt anoraks..

The colour on the 105 is a dark gold, akin to the Glenlivet earlier on.

The nose carries those typical Glenfarclas-esque sherry delights alongside macadamia nuts, bitter chocolate and coffee grinds. Not a note you often find in whisky but it plays its part very well alongside the sherry influence.

On the palate the whisky finally spreads its wings with its 60% strength with indonesian long pepper, the coffee from the nose, more nuts and fudge. This leads in to a long and heated finish carrying more of the pepper from the palate and oak.

£42 you say? For a 60% sherried whisky at natural colour, this is a great affordable Speysider to have in the house all the time. Bargain.

Aberlour A'bunadh is possibly one of the most famous and popular sherried whiskies of recent times. A'bunadh is a no age statement batch release range of 1st fill Olorosso sherry cask matured, cask strength Aberlour Whisky.

This particular bottling is from the most recent batch #47 bottled in January 2014! Each batch varies massively and we had the benefit of Adam bringing his remaining Batch #46 to test side by side. 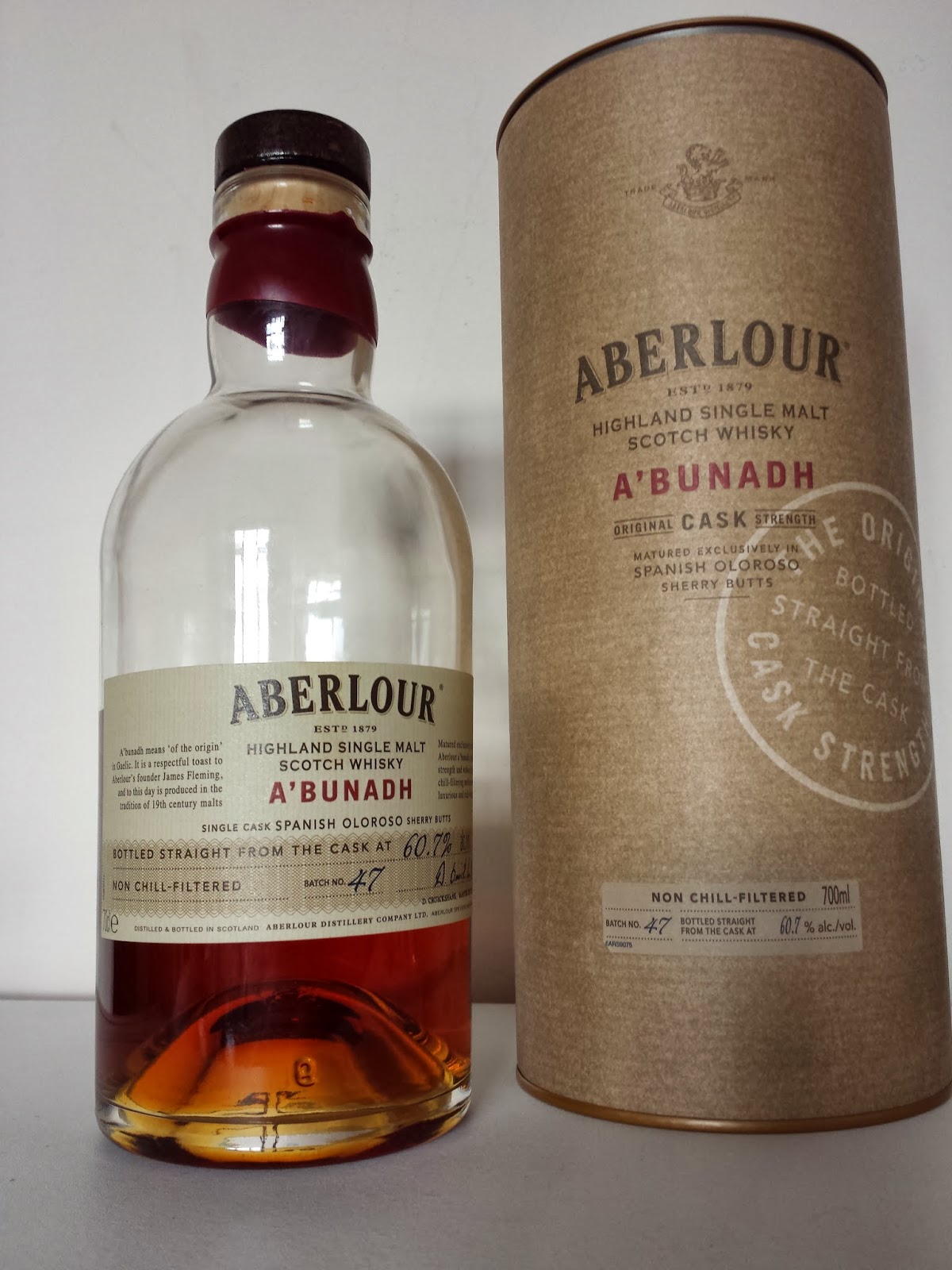 Batch 47 (2014) 60.7% - A well balanced nose, sherry, Madagascan chocolate, orange rind in a still
unbaked Christmas cake mix and a mixed nut tin. The palate was a bit more in tune with itself again with the sherry leading the fore alongside red currant sauce, Nutella on toast and freshly baked ginger biscuits. The finish was similar to the 46, long, but mellowing to show the sherry's true deep character that really did last for a long time.

From memory it was a bit of a split between the 46 and 47 so was down to personal preference and taste which is one of the great things about whisky.

The 47 retails at around £39.99 which not only made it the cheapest of the night but the most popular, there's a reason that people say Ablerlour A'bunadh is possibly the best 'bang for buck' whisky out there.


The night was a roaring success with a good even split between the Glenlivet, Miltonduff and Aberlour in terms of popularity. It just goes to show that if you take a step off the beaten path, you can find little gems like the Miltonduff and that you don't have to spend a fortune to go home with a high quality, well made and enjoyable single malt from this utterly fantastic whisky making region.