A Tasting With Midleton

Another month, another whisky club. Or should we say, whisk(e)y club? On the 27th February we welcomed the North West of England's Midleton brand rep - Greg to take us through some of Ireland's best whiskey. Pernod Ricard have a big presence in Irish whiskey so it was no surprise to see such a fantastic range of whiskey being lined up for this one.

Irish Whiskey has enjoyed the same renaissance as Scotch and other world whiskies over the last 5 years or so, and despite Ireland's share of the market still sitting below 10%, Irish whiskey retains its status as being a very strong and unique producing region with truckloads of tradition. Many argue that Ireland is the true home of whisk(e)y as it is known today. We're sitting on the fence with that one to retain our close ties with our whisky producing neighbours...


The packed room knew we were in for a treat when Greg rocked up armed with a crate and a heavily leaden holdall bag like Buckaroo fallen on hard times.

When everyone arrived Greg started by taking us through the distillation processes used at Midleton with the use of informative videos and examples. These included the unique way they dry their malted barley with natural warm air and the fact that Jameson is one of the few whiskies to use malted and un-malted barley.

In addition to the below we also tried; Jameson (standard), Jameson Select Reserve and Redbreast 12. We've skipped the bottles above that we'd already tasted at our last Midleton tasting, the notes of which can be found here.

In our last tasting we'd tried Green Spot, a 10yr old offering named after the blobs of paint applied to casks by then whiskey merchants Mitchell and Son to identify the contents of casks sat to mature. Now we looked at Yellow Spot, Green Spot's older brother at 12 years old and matured in 3 different cask types; Bourbon, Sherry Butts and Marsala wine casks. Yellow Spot, like Green Spot is a single pot still whiskey.

The nose is very sweet and delicate, taking more of its lead from the Bourbon and Marsala casks than the Sherry. With a palate which was very tropically fruit led with spice, vanilla and oak. This is an altogether different Whiskey to Green Spot, where Green Spot was clunky and rich, the Yellow Spot seems more refined and aloof.

A very good dram and surprisingly different to the Green Spot. Both have very differing and favourable characteristics. This retails at around £60 from places such as Master of Malt and The Whisky Exchange

The theme of the night was single pot still releases and this bottling followed the trend. Redbreast 15, like its younger counterpart the 12, is adorned with that Garden favourite, the Robin. Hence the name. However, the name originally stemmed from the slight red hue of older releases according to Greg and the Robin was added later.

Packing an increase in strength by 46% and this bottling and having been matured exclusively in Olorosso sherry casks, the Redbreast 15 again, is a different whisky to it's younger counterpart.

Where the 12 exudes floral, green fruit and toffee notes, the 15 comes in with a heavy stewed fruit, warm pastry, honey, mango and orange pith nose. On the palate due to the whiskies Non Chill Filtration, is a wonderfully thick and oily consistency carrying more jam/ preserved fruit, vanilla cream and orange oil. The finish long and warming.

Redbreast 15 retails at around £65-£70 from specialist whisky retailers. 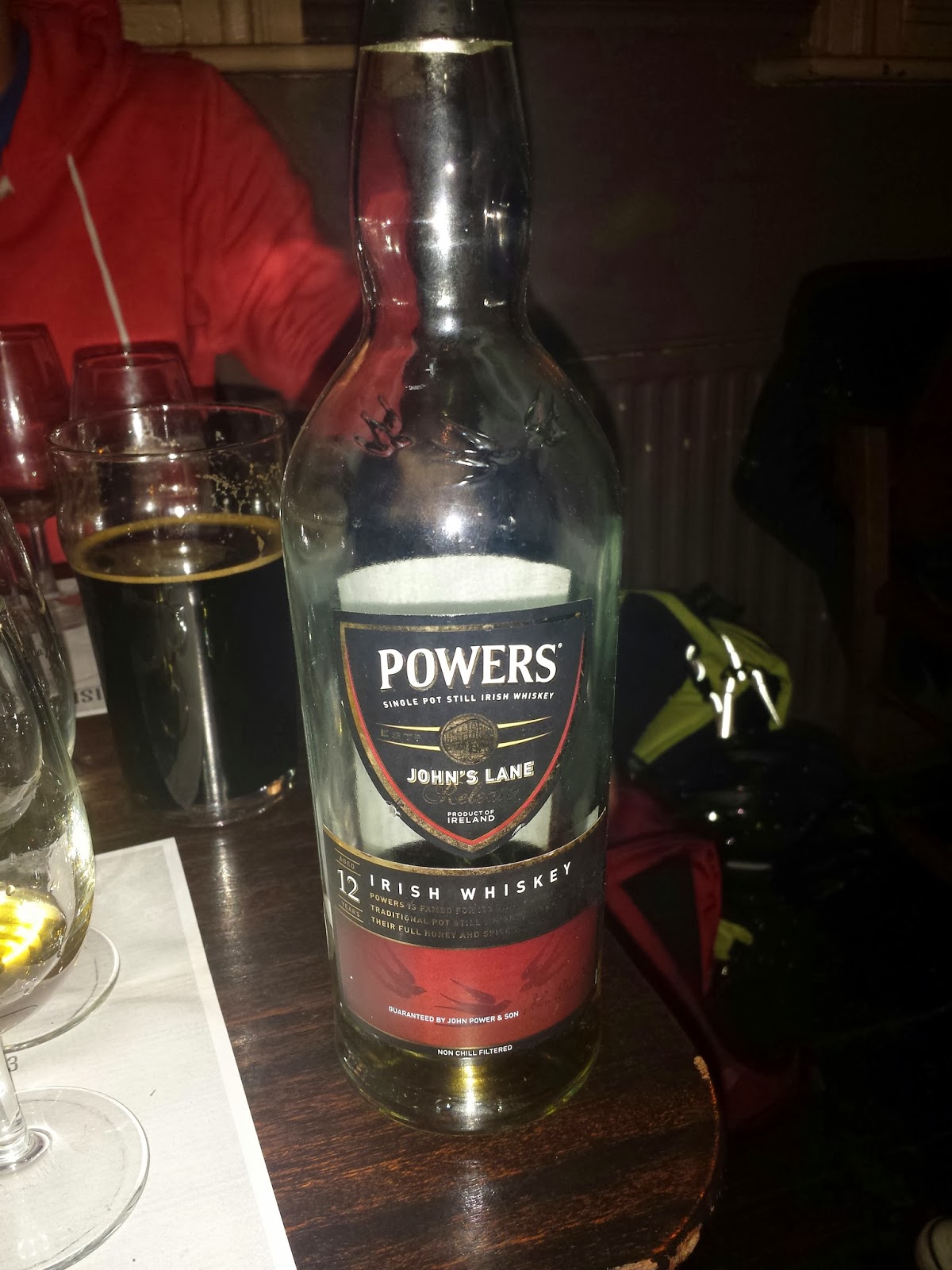 Next up, yup you've guessed it, another single pot still whiskey! Powers is a 12 year old matured in Bourbon and Olorosso sherry casks and is named after the distillery where the whiskey was originally produced which like many in Ireland, closed many moons ago.

The nose is a very vibrant yet deep affair despite its age and maturation partly in Sherry with notes of wet barley (sounds odd but akin to the Bruichladdich Laddie 10 in many ways!) which then turns around to the more sherry led profile with leather, polished wood with a liquorice and stewed blackberry note throughout.

On the palate straight away you can tell you are in for a smooth ride, it's worth noting Powers is a very well balanced dram, it remains smooth on the palate in true Irish style yet retains its spice and depth of flavour. Think cinnamon, chocolate Hobnob, more black fruits such as prune and more sugared blackberry before rounding off with a long and spicy finish.

Powers retails at around £45 from specialist retailers.

Our 3rd Jameson bottling of the night and we're back to the blends (prior to Yellow Spot we'd racked up with Jameson original and the Select reserve). This, the 18 year old Limited Reserve is selected by the Jameson master blender and bottled at 40%.

A very sweet introduction with something similar to the barley in the Powers but more akin to cereal which is a note also present in the standard Jameson bottling with the use of un-malted barley in the wash. Jameson is closely associated with its standard release and one or two other bottles available in supermarkets. The 18 certainly isn't any of the above. The 18 is a blend of 2 single potstill whiskies and a grain whisky that are then matured in Olorosso sherry casks before being finished in first fill bourbon casks.

The nose is rich, possibly leaning towards the oaky side but retains a sweet honey like character as well as orange oil and toffee. The palate is again smooth, as we've come to expect from the Jameson range and carries toffee, polished oak, espresso, vanilla and hazelnut. The finish lingers sweetly for a 40% dram.

Where you can find it this retails at the edged of £70.


This whiskey is the first to bear the name of the Midleton distillery in its own right for many years. Barry Crockett legacy is named after legendary master distiller of the same name in homage to his many years of work and craft at Midleton. This is a single pot still whiskey at 46% and features spirit matured in ex bourbon casks and new American oak casks.

This a special release at around 2,500 bottles a year and since coming onto the market has been picking up awards worldwide.

The nose provides lots of honey and a malty character not normally associated with Irish whiskey. Next to these were notes of lemon zest, sticky toffee and grilled corn on the cob.
On the tongue there is more honey initially but is clawed back with chocolate orange, fruit salad sweets and cinnamon. The finish is where vanilla really plays its part, its a long, sweet finish with a slight hint of toasted marshmallow. A very special bottling indeed and worthy of it's acclaim. At £140 a bottle we can't comment on the cost but this is a very well crafted whiskey indeed.

Yet another treat from Greg here a very rare bottle of Jameson Rarest Vintage Reserve 2007. For some perspective here, this bottle is the Rolls Royce of their range. This bottling is a blended whiskey made from some of the oldest stocks in the companies warehouse and selected by t
he master blender himself. What is interesting about this whiskey is that one of the contributing spirits has been matured in port pipes. The grain whiskey component is around 24 years old.


We were very chuffed indeed to have this little beauty feature. Not only does it retail at around the £250 mark but it is also very, very hard to get hold of nowadays. So again huge thanks to Greg for stepping up with this lineup.

A sweet and rich nose here, this couldn't be more different to it's £20 standard bottling cousin. Nuts, raisin, cherry yoghurt and black forest gateaux with warm toast covered in honey a consistent feature. 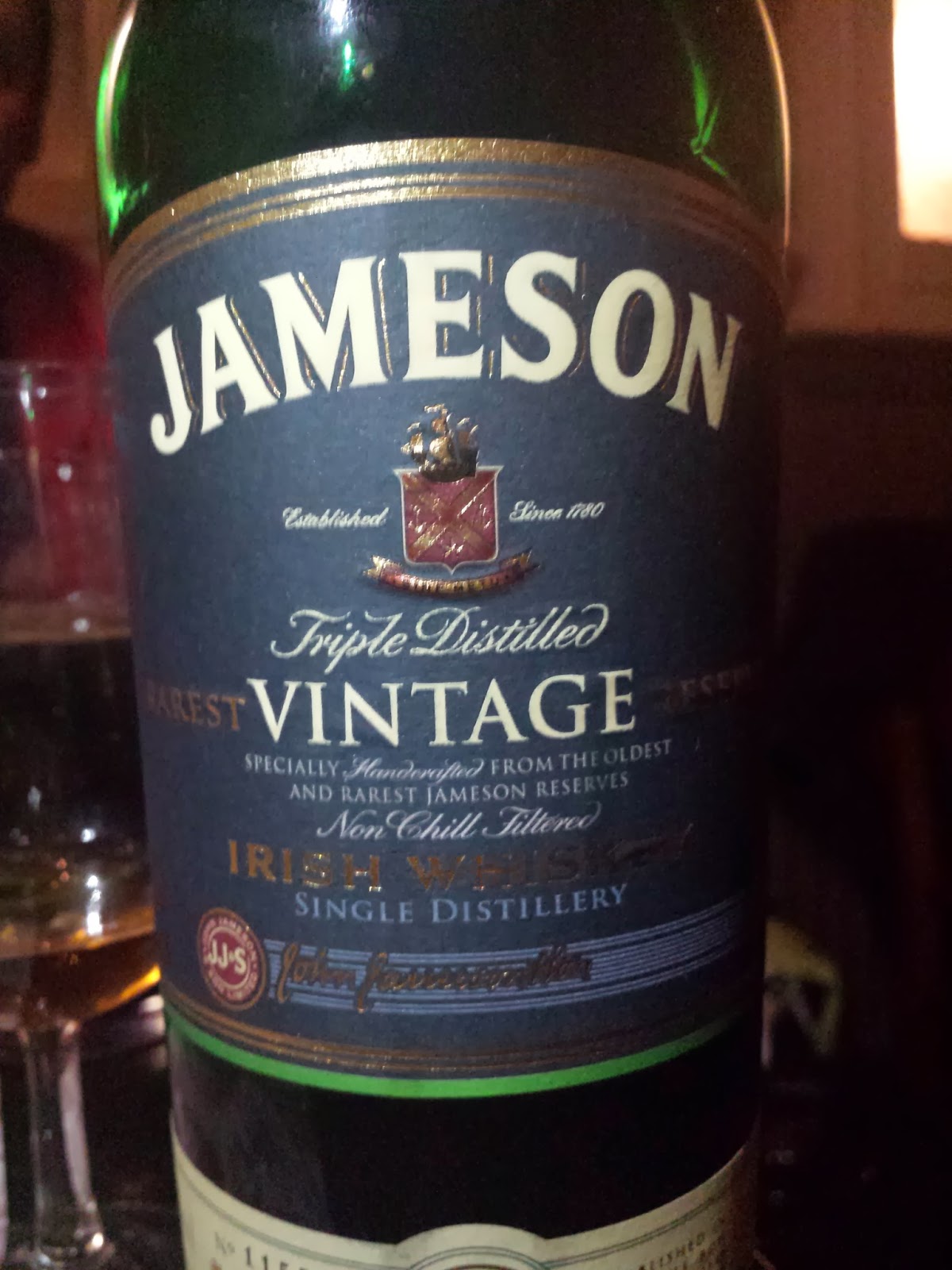 The palate was an even more rich and graceful affair, think an executive's office with rich mahogany paneling and many leather bound books. This guy doesn't need a Mac or a PC.. oh no sir, he uses a fountain pen with an iridium nib. This carries a luscious damp leather note, and immediately replaced with stewed redcurrant and dried cranberry, then followed by a deeper, richer heather honey and freshly baked victoria sponge. Finishing with a long, and incredibly moreish waft of strawberry jam. These red and fruity notes probably all thanks to the contributing Port matured spirit.

We heard many murmurs from around our table saying how this is without a doubt the best irish whiskey, in some cases, the best whisky overall, that people have tried. A fantastic accomplishment.

Overall the consensus seemed to run with the top 3 being the Redbreast 12, Midleton Barry Crockett and Jameson Rarest Vintage Reserve.

Tonight not only highlighted the tradition, skill and  passion within the Irish whiskey industry, but also really showed how and why Irish whiskey can easily hold its own with the big boys from Scotland.

Thanks again to Greg Slattery for taking the club through this amazing night.
Posted by Manchester Whisky Club at 12:22 PM