The Whisky Club's latest tasting saw us look at the prospect of different cask finish and maturation styles. We made it our mission to take a look at some more.. experimental and unusual cask finishes and maturation techniques from across Scotland.

First up, a few basics and background on whisky maturation.

Whisky differs from other spirit and wine producers for the most part in that the vast majority of casks used to mature the liquid are second hand. Yup, that's right, this noble spirit often thrust upwards into the stratosphere of luxury uses cast offs. Wine producers for example tend to use new European or American oak casks.
Whisky however, as a rule uses former Bourbon, Sherry and varying types of refill casks.

Bourbon casks are very popular across the whisky world for maturation as they are widely available. Since US Bourbon producers must mature their spirit in new oak casks for a minimum of 2 years in order to be called Bourbon, what can they do with the casks afterwards? They can't use them again.. Sell them to the Scotch and world whisky industries! Win win for everyone. Bourbon cask maturation tends to impart vanilla, sugar and spicy characteristics into the maturing spirit. Penderyn for example source their casks direct from Kentucky Bourbon distiller, Buffalo Trace.

Sherry is also very popular too, and arguably Sherry matured whiskies tend to be the most sought after and can cost more than their Bourbon cask matured counterparts. Sherry casks are a little bit harder to get hold of for distillers however. The best Sherry casks hail from Jerez in southern Spain. However, everyone and their mum is generally after a good sherry cask to lend those trademark Christmas cake and deep, rich flavours.


Not all Whisky spends its time in a  specific cask for all of it's life though. Many are matured in what are known as Hogsheads or "Hoggy's" as Whisky anoraks like to refer to them (guilty). These are large casks that are rebuilt using wooden staves from previously used Bourbon and sherry casks. These are a cheap way of ensuring distillers have barrel stock to fill with spirit without having to splash out on new casks elsewhere. The term 'refill Hogshead' comes from how many times the cask has been used to mature Whisky. E.g a 2nd refill Hogshead has already been used to mature whisky once and has now been refilled to do the same again.

You might be able to recognise what type of cask a whisky has been matured in from it's colour. Bourbon casks produce a deep gold, Sherry a rich amber and ruby hue and hogsheads generally a light, paler gold depending on how many fills it has had.


So, after that cask information overload, let's move on to see what the night held. 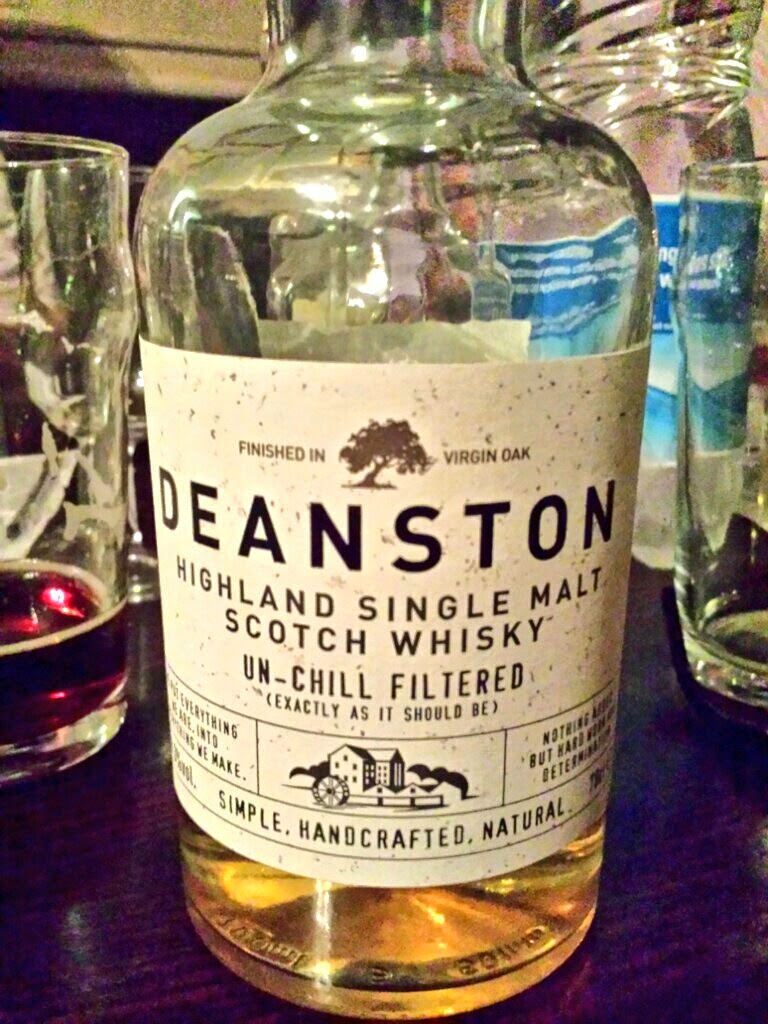 Virgin Oak is a relatively new fad for Whisky. This is where producers used brand new, unused 'virgin' casks to mature the spirit. The casks are still charred before use as is common practice as with all casks used in the industry.

Deanston is an interesting distillery in Sterlingshire, an old textile mill, the distillery uses hydro-electric power to power the distillery itself. Groovy man. Apart from the Virgin Oak their mainstay release comes in the form of a 12yr old in addition to a few special editions.

Bottled at 46% this has been matured for an undisclosed number of years in virgin oak casks from Kentucky before bottling in 2013.

The nose is very spicy, rich with a sugar barley tone present. Moving on to the palate which displayed a fresh chili-like heat, toffee, honey and lime zest.

The tag at the bottom of the bottle "Simple, Handcrafted, Natural" goes someway to describing Deanston's style. A good dram indeed and it won't break the bank. 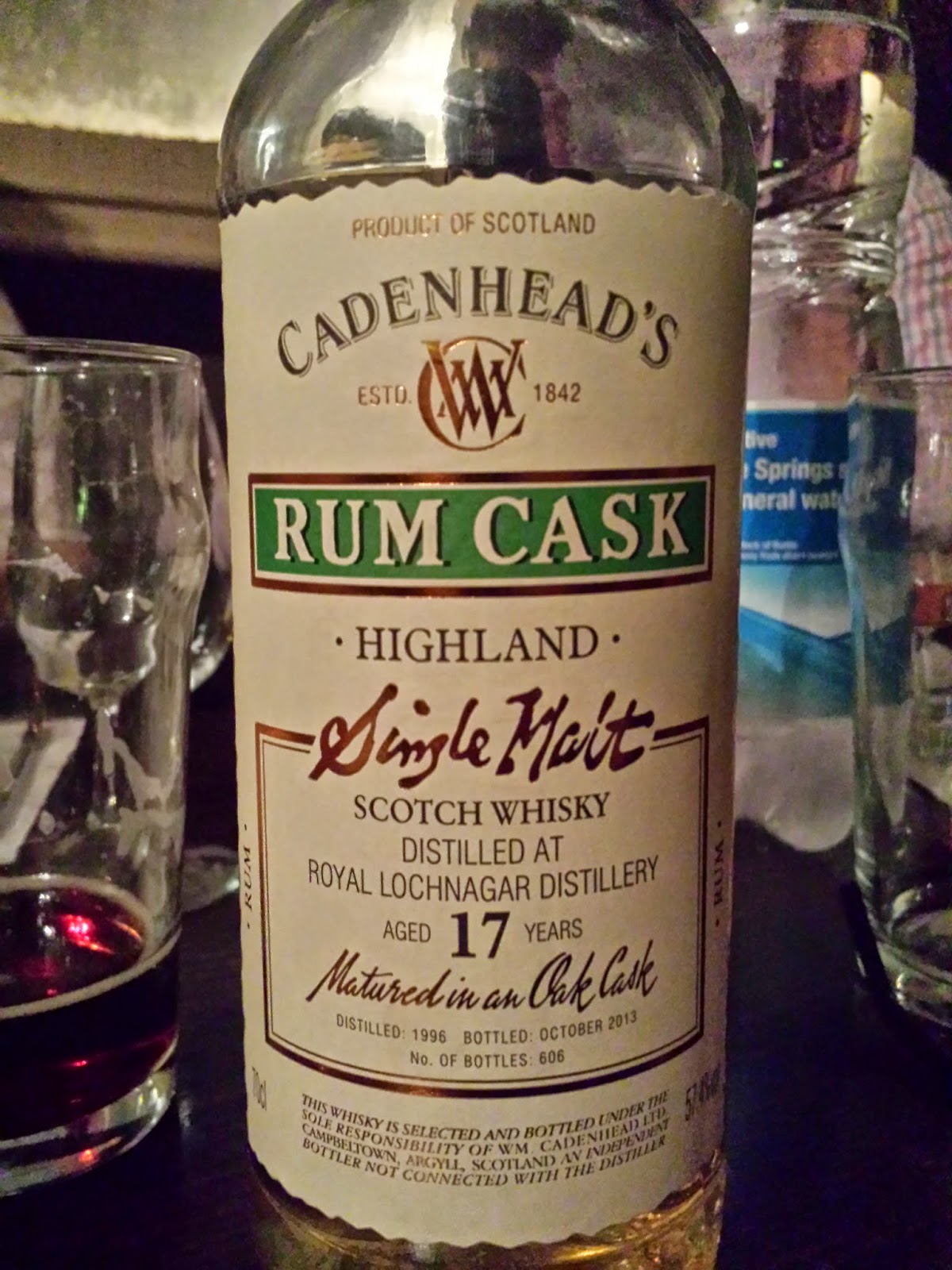 Royal Lochnagar, a very regal sounding distillery, is nestled in the Highland region not far away from the royal homestead of Balmoral. Once known as just 'Lochnagar' until Queen Victoria and her husband, Prince Albert were invited to take a tour of the disillery and took a liking to the whisky from Lochnagar. The distillery gained its royal warrant in 1846 and was known thereon as Royal Lochnagar!

This cask strength bottling is another single cask selected and bottled by the bods over at Cadenhead's. The whisky was matured for 17 years in an ex rum cask and as usual with Cadenhead's is bottled at natural colour and strength.

The spirit within this quirky bottle carried notes of cut grass, lemon zest and cinnamon and apple pie on the nose. The palate was warm, spicy but light with vanilla and danish pastry. A lingering, sweet finish rounds off a very interesting and worthwhile dram.

This seems to be a whisky that wouldn't be your 'go to' everyday dram but will answer when you have a bit of an itch for something a bit different. 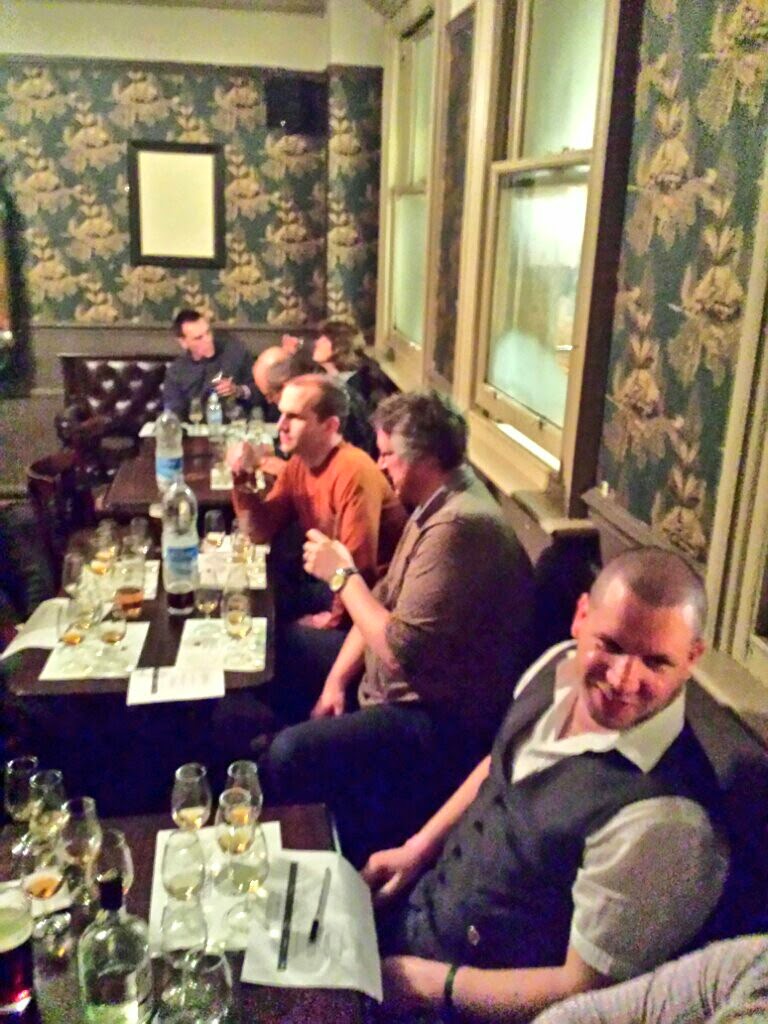 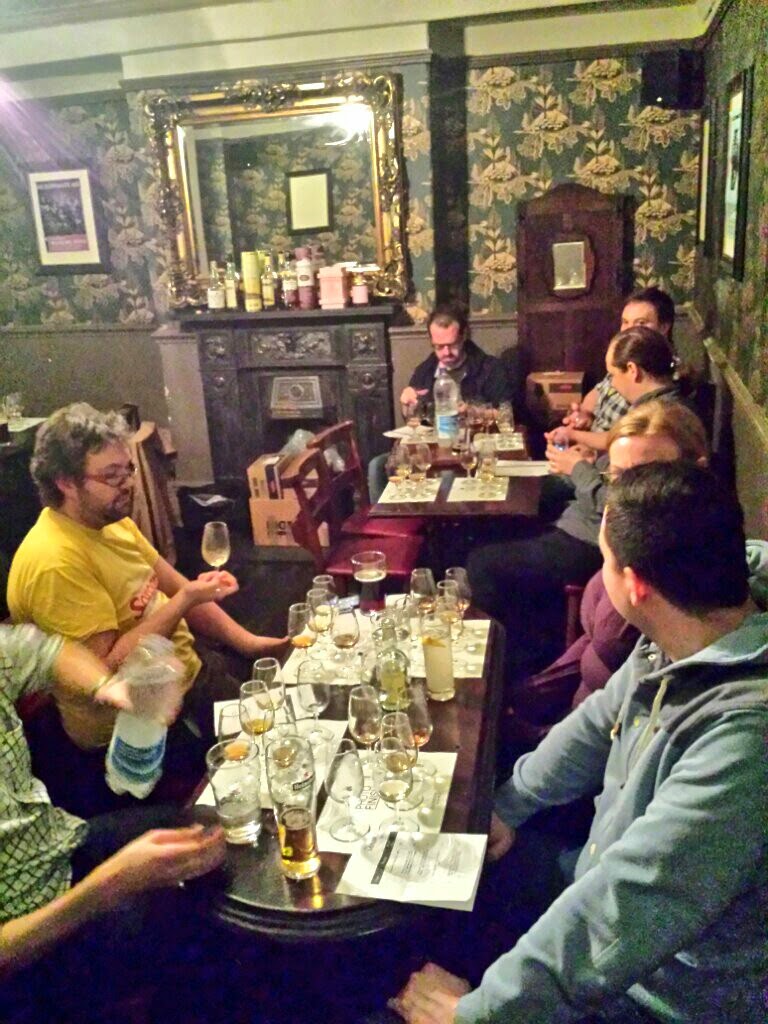 That's right, another BenRiach, this is our 3rd BenRiach in various guises since last year. 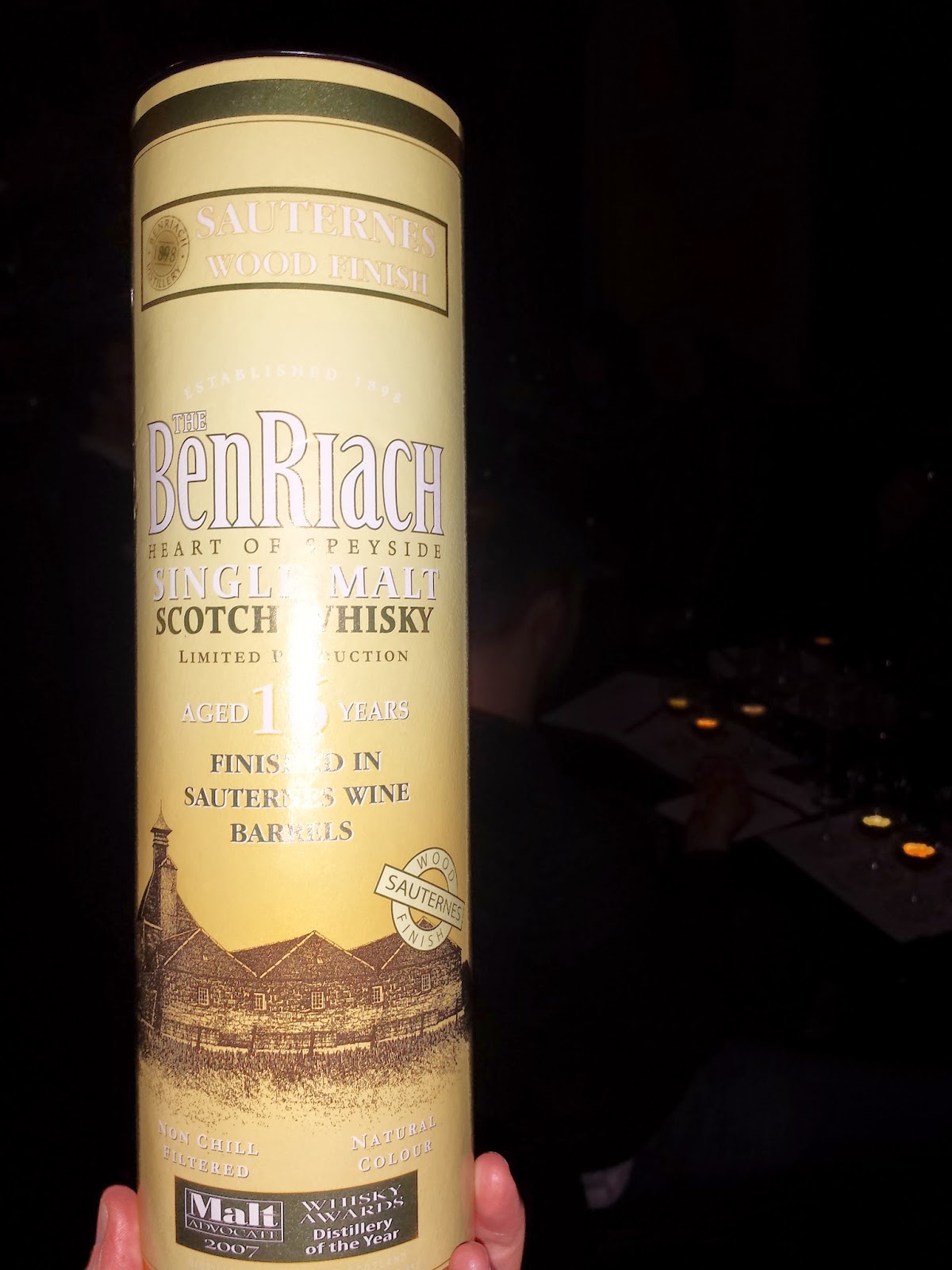 This particular release from the Speyside distillery is made from un peated spirit that has been matured in an ex bourbon barrel for 16 years before being transferred and finished in Sauternes barrels. Sauternes is a rich, sweet white wine from Bordeaux and is made with Sauvignon Blanc, Sémillion and Muscadelle grapes.

BenRiach have been gaining a reputation for their various finishes. Others in the range include Dark Rum, Pedro Ximénez, Virgin oak, various types of Port inc Tawny, Madeira and this Sauternes release.

The nose is quite cloying initially, with slight notes of pecan, honey, lemongrass and there was also mention of marzipan. The palate is very thick and rather sweet as you'd expect from the type of wine cask used and this flows well with more honey, lots of vanilla and well balanced oak. The finish is quite oaky again with the vanilla and pear.

A very good dram. One taster (a lady I might add) declared this as being a lady's whisky due to its sweet and delicate profile. Who are we to disagree but it was certainly enjoyed by the majority both men and women alike and was a very good example of how well wine finishes can compliment a good base spirit only 1650 bottles were produced. Kudos BenRiach.

Tomintoul is the self proclaimed 'gentle dram', a sizeable Speyside distillery owned by Angus Dundee, they are well known for providing a soft, sweet and uncomplicated whisky experience for an affordable price.

In this instance this comes in the form of one of their limited edition bottlings, the 12 year old Portwood finish. This is the first Port finished whisky from Tomintoul and is bottled at 46% which is good to see as  a lot of their range is down at the 40% mark.

Immediately the eye catching thing about this whisky is the vibrant pink hue that it has. It's very, very pink.

The nose immediately makes it's Port-fueled past known with a lot of rich strawberry jam and vanilla cream. This a fruity dram make no mistake, if you don't like berries with your whisky look elsewhere now. Interestingly someone mentioned cream soda which is also a tasting note spotted on a certain whisky retailers website but is pretty bang on in our book.
The palate is along the same lines but is very gentle as Tomintoul claim, it's well balanced sweetness isn't sickly or overpowering. There's watermelon with sugary cereal, plum and dried cranberry. The finish is short but very pleasant a return of the fruit here with more strawberry and custard. 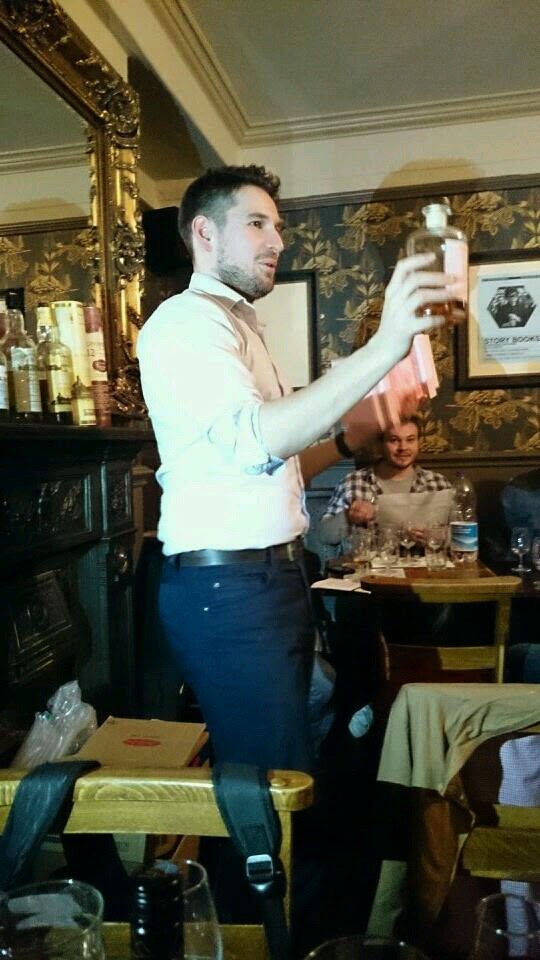 Last up was what was potentially the most unique bottle of the night. An 11 year old whisky from Edradour's 'Straight From the Cask' series finished in a Chateauneuf Du Pape barrel before being bottled at a whopping 58.5% and natural colour.

Now apologies in advance for the pictures used. Sadly I wish we had a picture similar to those above from the night but sadly this doesn't appear to exist. So this is club Chairman/Dogsbody Andy holding the rather garish packaging that comes in the form of a small bright pink box which thankfully was later passed to a lady in attendance who will have, by now planted basil in it.

Edradour was formally Scotland's smallest distillery and is a bit of a Marmite distillery in some circles. This dram again carried a pink hue akin to the Tomintoul but deeper in colour.

The nose is crammed full of various fruit jams, conserves and compotes once again. The strength carries the wood influence along with it as well as rich fruit crumble and boiled sweets. On the palate we had cries of marshmallow, fruit laces and pick n mix shrimps. A medley of childhood sweets basically. The finish is long and rich retaining the wine cask influence.

A very fine example of a cracking single cask selection and finishing method here from Edradour. Only 420 bottles were produced for this release. 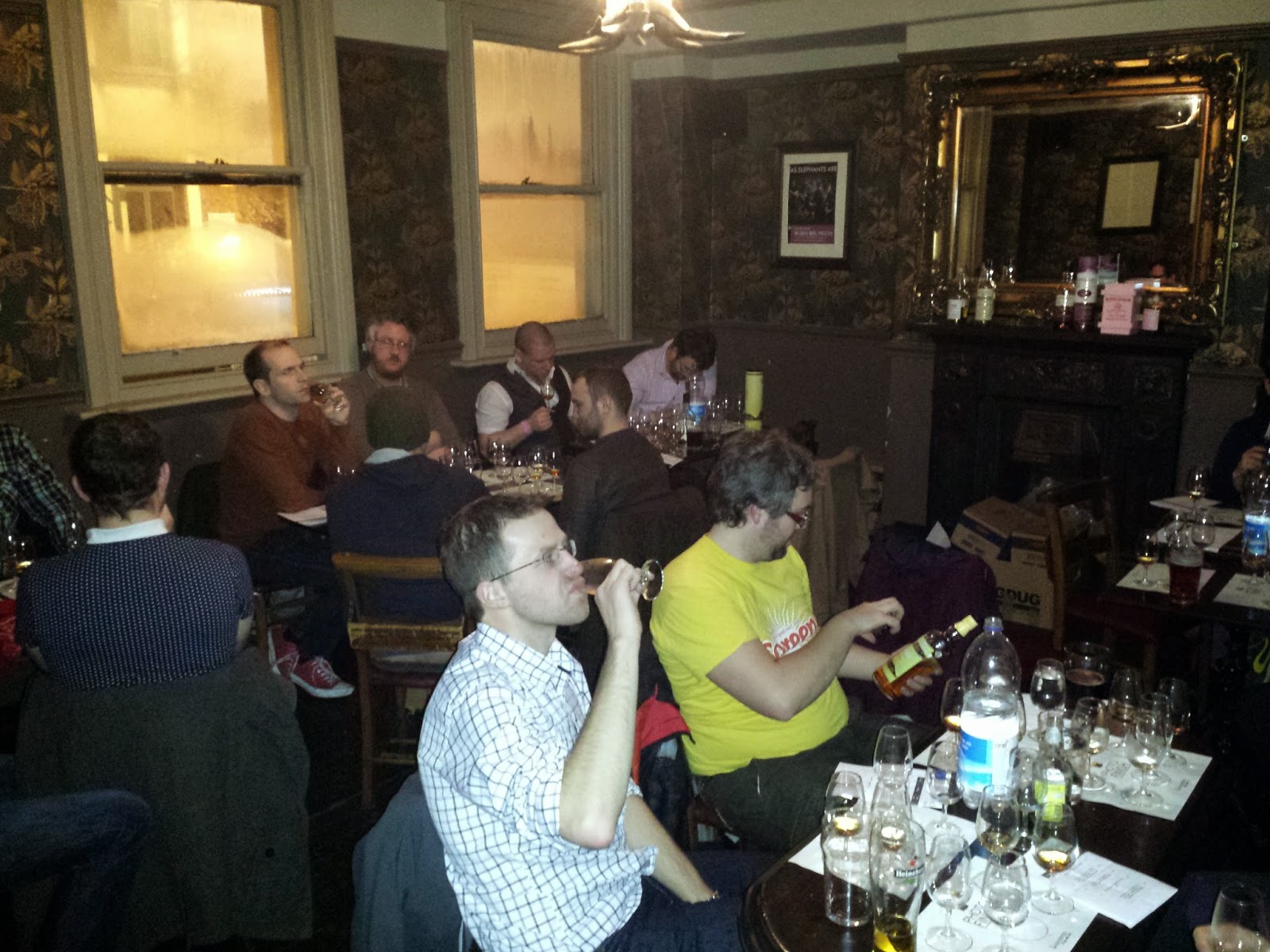 So that was the end of our epic adventure in to the world of cask finishes. The drams in the lineup really highlighted how a certain cask can put it's own stamp on a whisky.

The Edradour won dram of the night at the vote but the Tomintoul followed close behind. 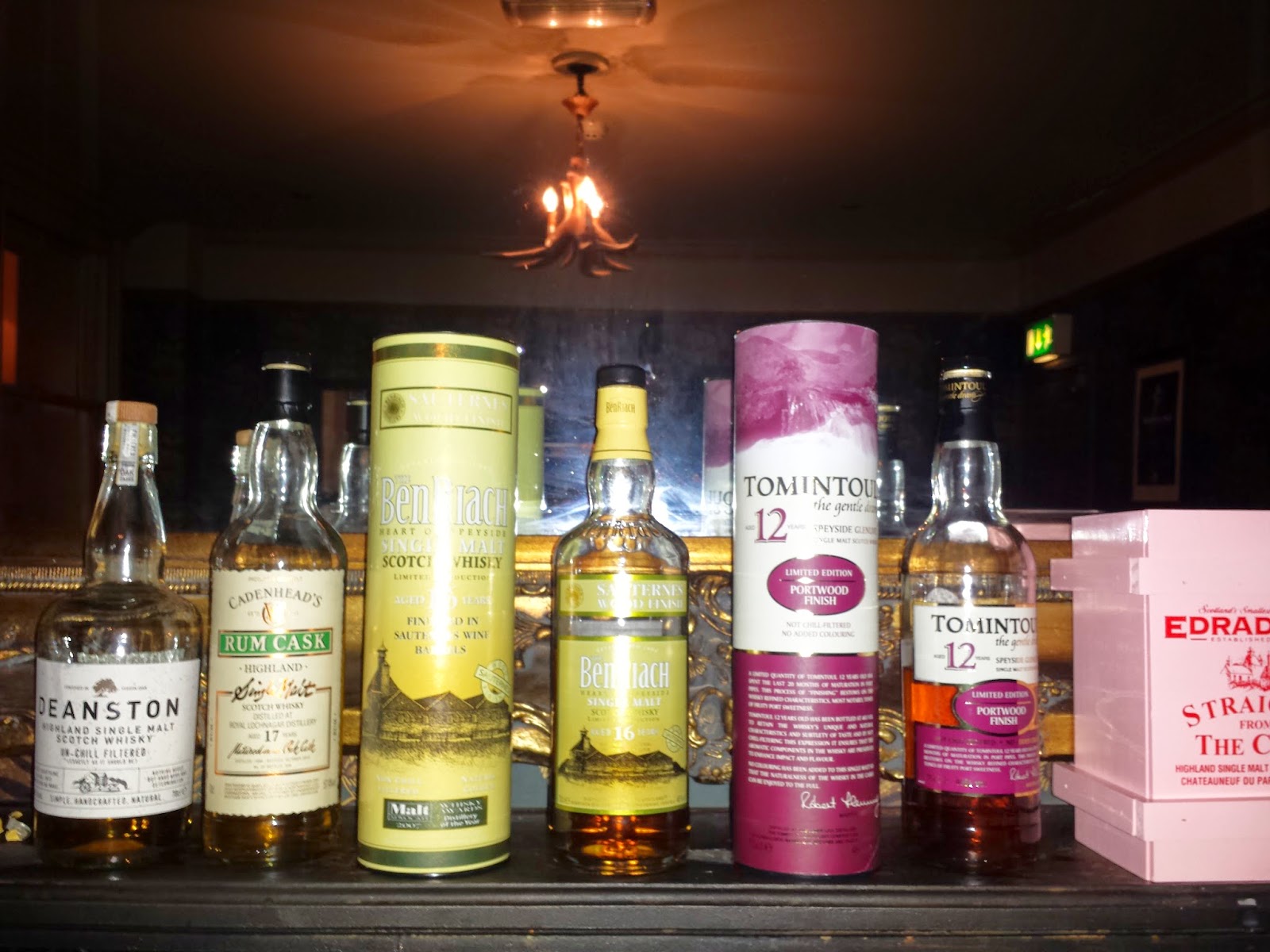 All content included in this blog is property of the Manchester Whisky Club and will not be used without its express permission.