A good turn out formed the basis of a great evening. Here's how it went... 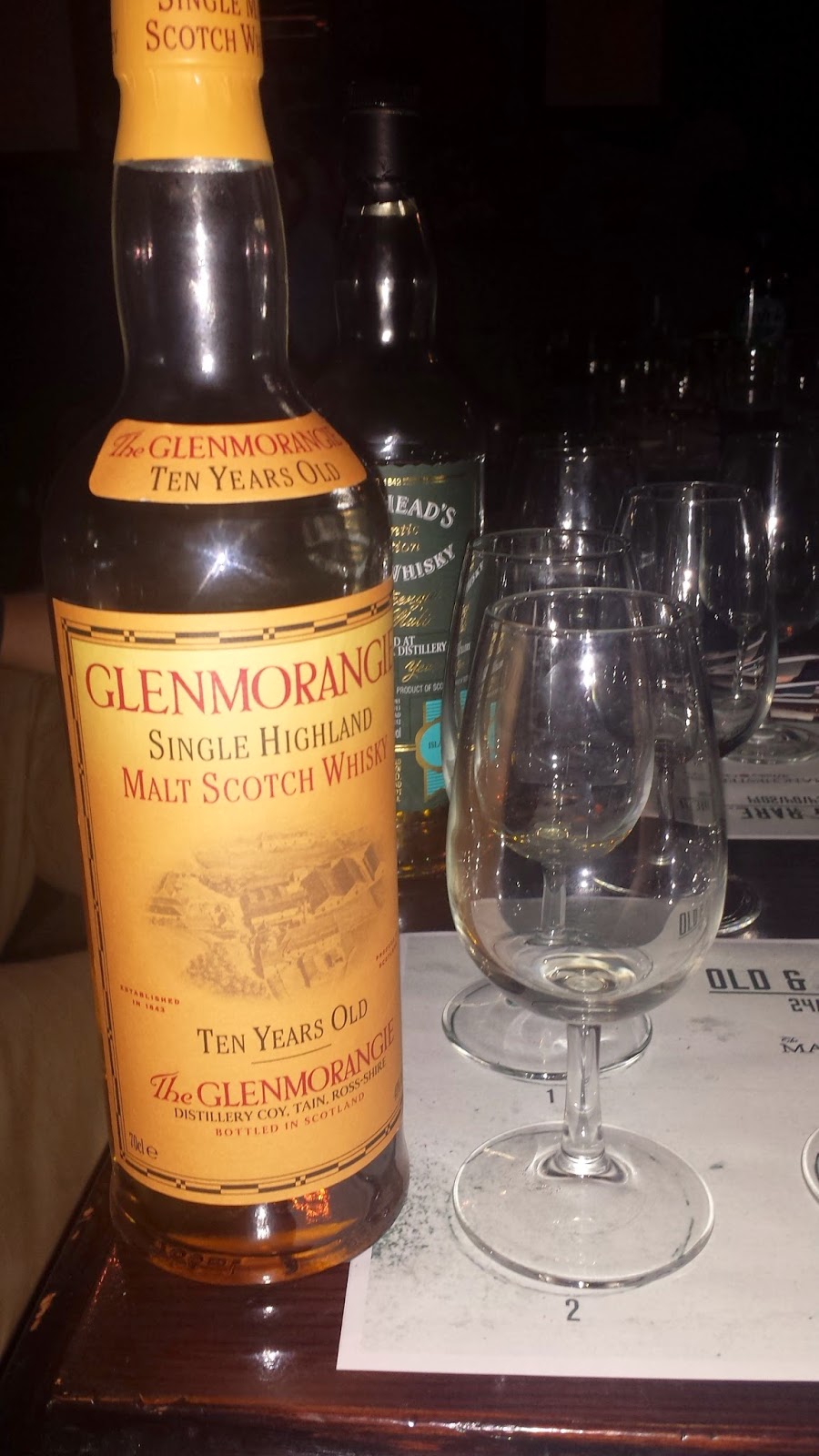 First things first, "That's not old or rare!" we hear you cry. Sure it might not be wielding a zimmer frame at a spritely 10 years but this particular bottling was bottled in either 1993 or 94 and was therefore distilled in the 1980's.

We also put this side by side with a modern bottling of Glenmorangie 'Original' which replaced the official 10 yr bottling in the early to mid 2000's.

The 1990's bottle displayed a fresher, more herbal characteristic than its newer sibling, with a whiff of green apple and cereals too. Much warmer and spicier on the palate with a good oily mouth feel.

The modern Original bottling is a bit sweeter as well as creamy although retaining some of the green fruit qualities of the older bottling but lacking in the finish.

Overall there was a general consensus that the older style of whisky was better although there wasn't a huge amount of difference "It's still just Glenmorangie" was mentioned, fair enough.

Purchased at auction for £35 excl postage and auction costs 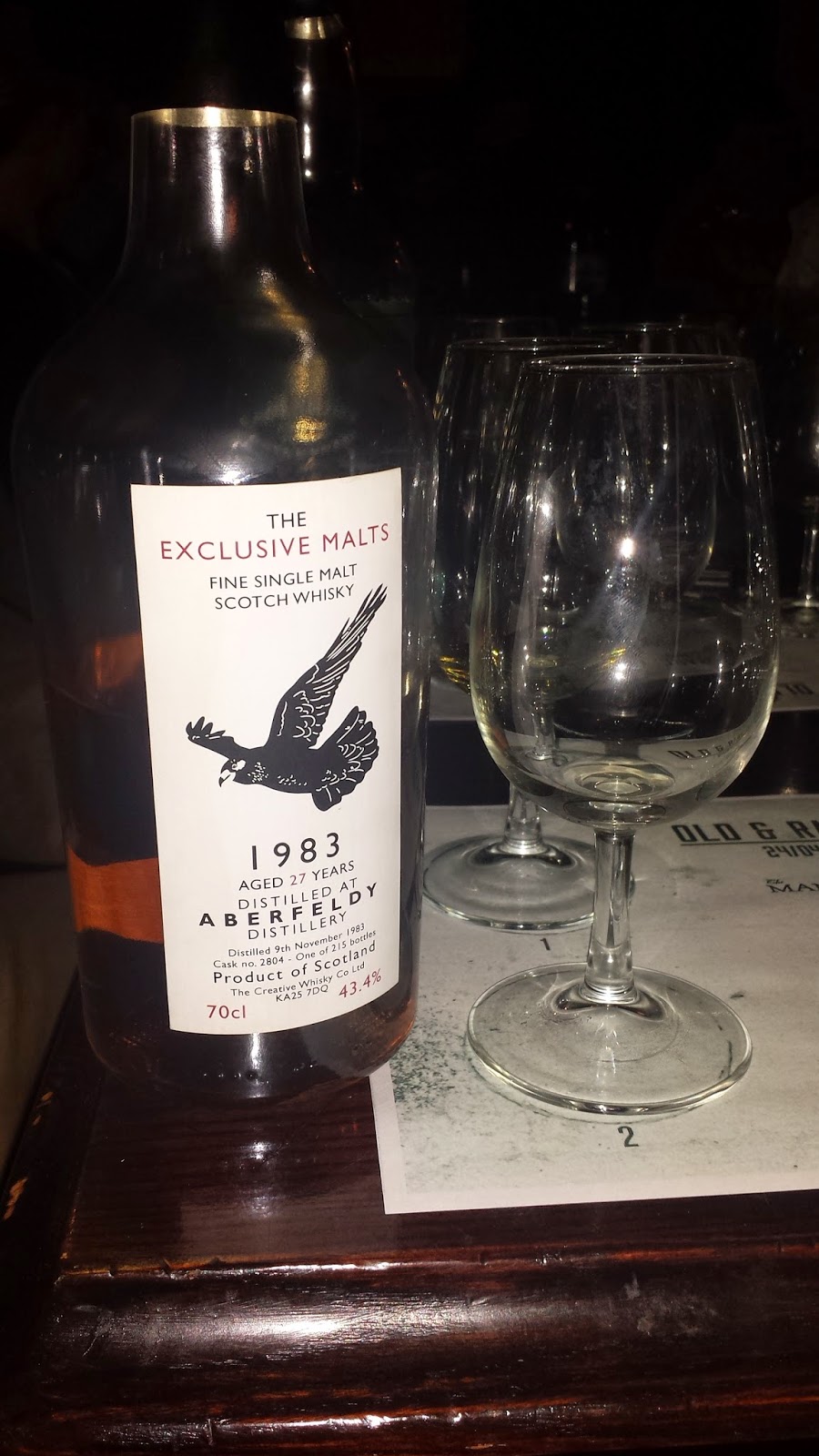 The first of the independent bottlings of the night, this 27yr old Aberfeldy, again purchased at auction, was bottled in either 2010 or 2011 after being distilled on the 9th November 1983.

Aberfeldy is a Dewar's owned distillery with the majority of production going into the company's own blended whiskies. Dewar's as a brand are owned by world famous Bacardi

Aberfeldy is available as a single malt in the distillery bottling range that includes a 12 year old, 16 year old and a 21 year old among others.

This dram had a rich hue indicating some time spent in a refill sherry cask of some sort or a decent hogshead with a nose of Demerara sugar, a touch of fig and various dried herbs. The palate was admittedly a bit of a let down in many respects but offered a touch of liquorice and strawberry jam.

Not a bad effort. The creative whisky Co don't appear to have bottled anything since 2010 and their bottling's aren't often found in normal circles. We're not sure if these chaps are still going or not.

The bird on the label is quite pleasing, however, the dog on the back of the box provided a bit of a laugh to everyone.. We're all mature adults here at the Manchester Whisky Club and since we're all mature adults we decided to have a drawing contest to see if someone in the club was suppressing a hidden talent for drawing dogs... The results are in, aaaand they're still sh*t but much better than the one on the box!

..... The results are in, aaaand they're still sh*t, but more importantly, much better than the one on the box!

Purchased at auction for £80 excl postage and auction costs

Next up, a 26yr old Strathmill from Whiskybroker.co.uk. Another single cask offering but this time from a distillery that makes up part of Diageo's portfolio to supply the huge demand for blended whisky.

Strathmill is an integral part in the famous Blended whisky J&B Rare. The only official bottlings are a 12 year old in Diageo's Flora & Fauna range and a single cask release as part of Diageo's Manager's Choice range.

Strathmill is a very overlooked Speyside distillery that has had a very stable/uneventful past. This particular bottling was distilled on the 18th March 1988 and matured for 26 years in a refill Hogshead cask before being bottled on the 19th March 2014.

Despite maturation in a refill Hoggy this bottling has a very rich and luscious nose with chocolate, fruit preserve, strong biscuit like malt and icing sugar. The palate is spicy, rich and warming with cinnamon, pink peppercorn and warm custard.

Fantastic value for money at £65, keep up the good work Martin! 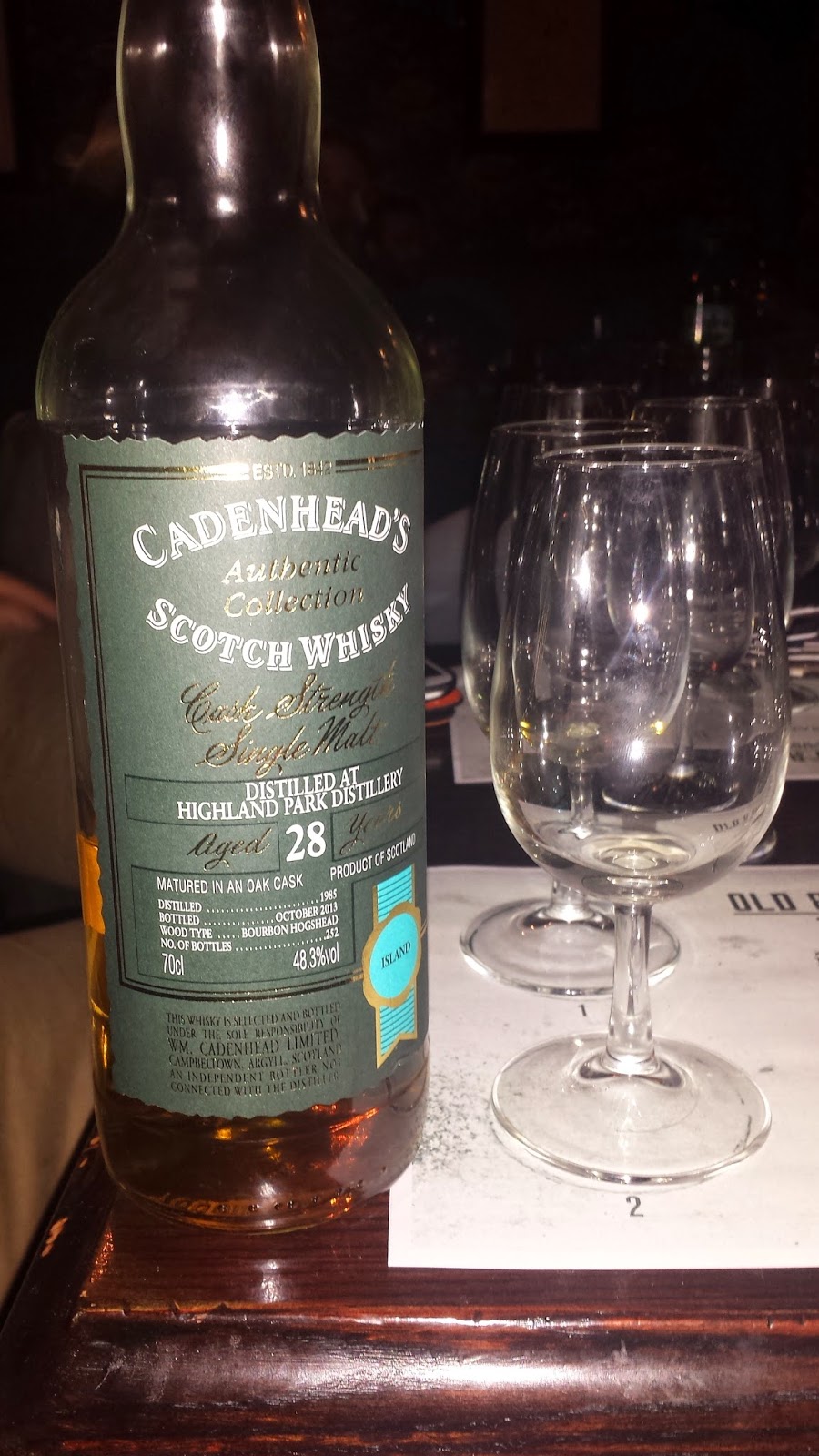 Yup, another bottle at the Manchester Whisky Club from Cadenhead's.. seeing a pattern?

Matured for 28 years in a Bourbon Hogshead this bottling was distilled in 1985 before being bottled in October 2013.

The nose is initially very sweet and surprisingly fruity! Pears and plums galore, the official tasting notes mention black wine gums which are nearly there but there's also an aniseed-y element too with the peat slowly coming into play.

The palate is surprisingly smooth, again carrying a great oily mouth coating texture, salt?, a bit of citrus and a nice soft peat element alongside.

This is a very good whisky indeed, another fine example of choice single casks picked and bottled at the right time. Not what you might expect from Highland Park in comparison to the core range but well worth the £125 spent.

So we're onto our final bottle of the night and what do we have..

Another Cadenhead's bottling? Yup, they bottle some damn good whisky and they know what they're doing. If you've never tried one of their bottlings before, seek one out.

This Caol Ila was distilled in 1984, matured for 29 years in a Hogshead and bottled in 2013. As Islay whisky goes Caol Ila is one of the most popular, their 12 year old is a fantastic introduction to smoky styles.

A large amount of Caol Ila's production is transported from Islay onto the mainland to mature in Diageo's vast warehousing network. So whilst this is an Islay malt it has no doubt spent the majority of its time on the mainland.

This particular dram has kept it's strength very well indeed considering the 29 years it has spent maturing.

The nose is enveloping in richness. Smoked meats but also herbs, toffee and peat. The palate is peat led but is also very refined, dark chocolate, marzipan and cinder toffee start to develop. The 29 Caol Ila is a dram that just really topped the night off and kept on giving.


A fantastic tasting with a lot of variety and uniqueness. Overall the Caol Ila came out on top with the Highland Park a close second and the Strathmill a very close third.


In May we're on course to tackle another Blended whisky night! This time a head to head for Blends Vs Malts, who wins, we'll soon see!